It’s Not Zika: Researchers Admit They Were Wrong About Microcephaly Cause |
AD 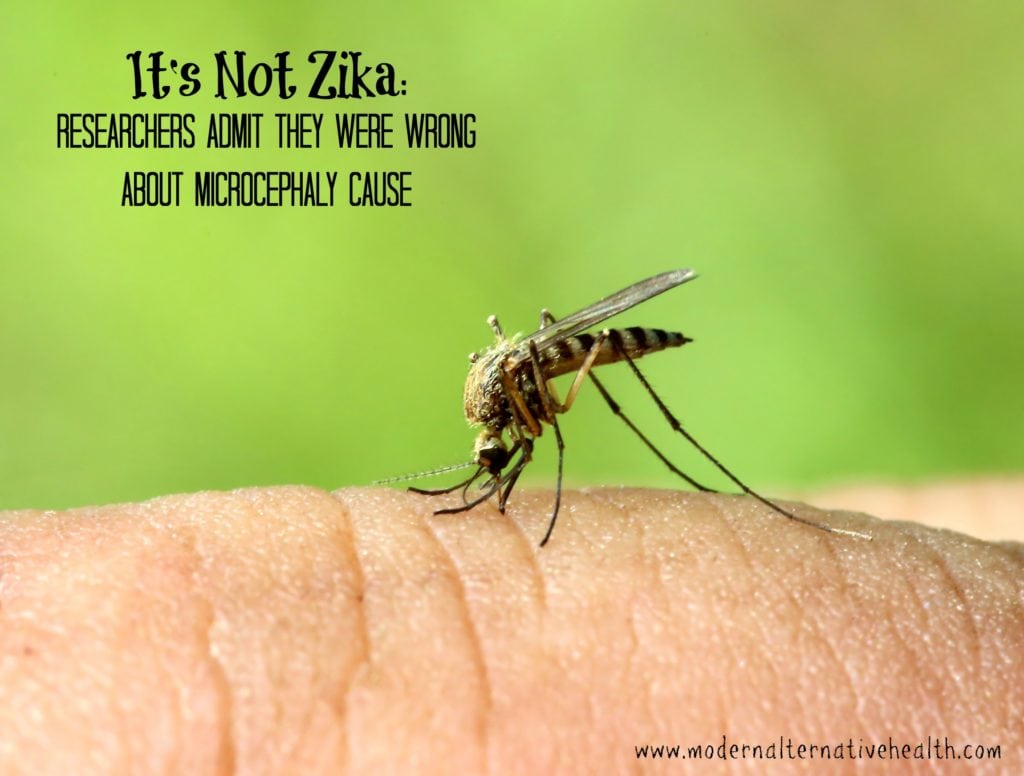 It’s Not Zika: Researchers Admit They Were Wrong About Microcephaly Cause Some months back, scientists and the media began reporting that cases of microcephaly in Brazil were on a sharp rise.  They blamed the Zika virus, a virus that has been around for over 60 years and has not, until now, caused any known issues.

This led to recommendations that pregnant women not travel to countries with Zika-infested mosquitoes, not get pregnant if they lived in such countries, and even to abort pregnancies if they contracted Zika, in case their babies would be born with microcephaly.

Many were understandably skeptical that this formerly-benign virus could suddenly be causing such a serious issue, but were told they just didn’t understand science the right way.

Now, however, after looking more thoroughly at the evidence, researchers are saying: “Oops, we made a mistake.  It wasn’t Zika after all.”

It’s Not Zika: Researchers Admit They Were Wrong About Microcephaly Cause

Basically, researchers have been looking at Colombia, a country that is experiencing a high rate of Zika-virus infection…only they have found no cases of microcephaly!

That is, within the study.  Outside of the study, four symptom-less women were found to have both Zika virus and babies born with microcephaly, but this is a rate which can be explained by pure chance (it’s out of 20,000 pregnancies) and so no link is likely. (source)

Of course, thus far, there has been no biologically plausible explanation for why Zika would have ever caused microcephaly.  Only that researchers “thought” they were related.  They had no clue how.

When people raised questions about the possibility of a link between the pesticide they were using, Pyriproxyfen, and microcephaly, they claimed it was impossible and “debunked.”  (Mid-February saw many articles in all the mainstream media, claiming this was not true.)

Unlike Zika, which typically causes low fever and a rash — most people will never even realize they were infected — Pyriproxyfen does have a biologically plausible explanation for causing microcephaly. (source)

Basically, Pyriproxyfen is a type of chemical that can bind to certain receptors in the body, that retinoids usually bond to.  Retinoids are required for normal development.  If Pyriproxifen binds to those receptors instead of retinoids, then they could prevent appropriate gene expression, or turn it on at the wrong time.

There are not adequate studies existing showing that this does, for sure, happen (but most studies that have been performed thus far are done by the manufacturer, and are poorly designed.  One decently designed study does show evidence of microcephaly).  But, medications that work similarly to pyriproxyfen are contraindicated in pregnancy, because they have been proven to cause microcephaly. (source)  This means that it’s quite likely that pyriproxyfen is causing this — or at least, that it’s one piece of the puzzle. What About Microcephaly in the U.S.?

Microcephaly is “rare,” but not that rare, in the U.S.

Given that approximately 4.3 million babies are born each year in the U.S,, this means approximately 2580 babies will be afflicted by microcephaly.

This has been true for years, and is not linked to the Zika virus.  It can be caused by interrupted blood flow to the brain, certain other virus infections, and exposure to toxic chemicals.  In a few cases, it’s related to a genetic disorder.

What About Pyriproxyfen in the U.S.?

Yes, this is used here, too!  It’s approved by the FDA as a pesticide for various crops, including strawberries, asparagus, peanuts, and grapes.  It’s also commonly used in flea and tick medicines and collars for pets.

When the chemical was studied in lab animals, they found the animals were less active and gained weight more easily.  It’s fat-soluble and can be stored in fat for up to a week in the body.  It can increase cholesterol levels in the body, and harm the liver and kidneys in the long term.  It can cause skeletal and digestive changes in some babies when the mothers are exposed in pregnancy (orally).  And, it may impact testosterone and thyroid hormone levels. (source)

This stuff is in your food.  It’s on your pets.  It’s in your bodies.

What To Do About Zika?

The evidence is incredibly weak that Zika has anything to do with microcephaly, or any birth defects or damage.  It’s strong that pyroproxifen does play a role.

To avoid that, choose natural/essential-oil-based pet tick/flea repellents (lemongrass essential oil is effective and fairly safe), choose organic foods, don’t hire someone to spray your lawn with chemicals, and don’t do it yourself.

These pesticides are no joke.  And, the studies we have primarily look at one pesticide at a time.  We have no idea how serious the effects might be when we start combining them — which is usually how they’re used in real life.

Be smart.  Be cautious.  And please stop listening to every media scary story.

How do you feel about this?  Are you glad it’s not Zika?