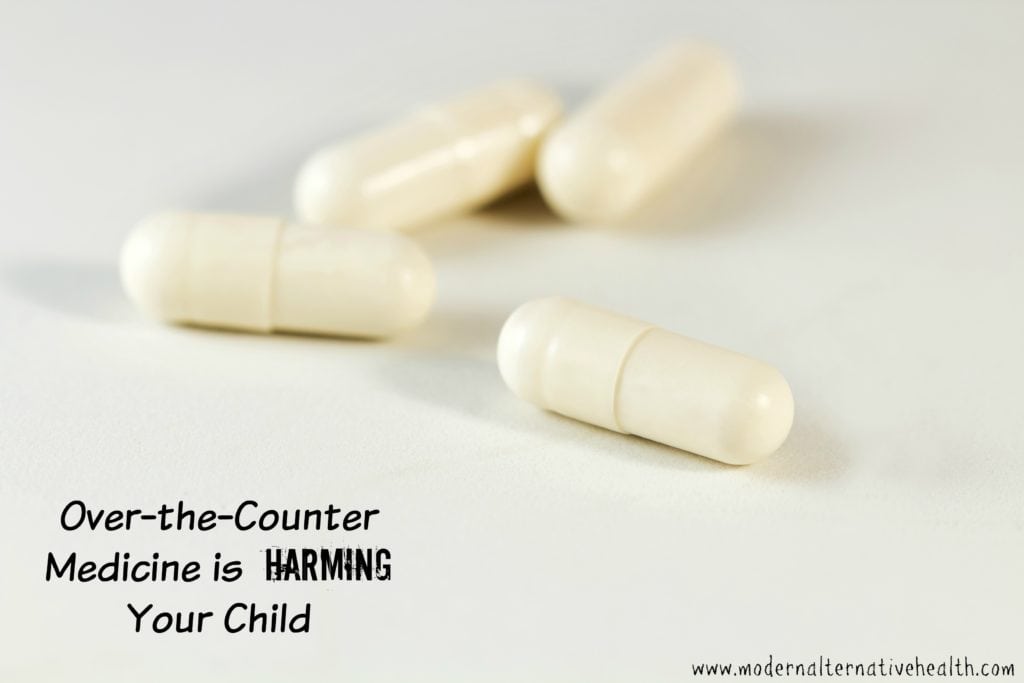 I’ve seen it too many times.

A child gets ill — something minor, usually.  A run-of-the-mill virus.  Then, the parent (intending to help), gives their child several different over-the-counter (OTC) medications, like Tylenol, ibuprofen, cold medicine, etc.  Suddenly, the child’s fever spikes, they’re miserable, their illness lasts for days.  A doctor’s visit is made, more medication is given.  Sometimes, it ends in ER visits, prescriptions, or even hospital stays.

Sometimes it just happens, nothing we can do.  But sometimes it is actually caused by the use of OTC medication itself.

The truth about most of this medicine is that its goal is to suppress the symptoms, so that your child “feels” better — temporarily.

These medications do things like dry up runny noses, stop coughs, and lower fevers.  Unfortunately, these symptoms, while unpleasant, are actually the body’s way of healing itself.  The body creates extra mucus to carry the virus out.  It coughs to remove that mucus from the lungs.  It runs a fever because that helps to make extra white blood cells to fight the infection more effectively.

When you use medication to stop those processes, then you stop the body from getting better.

Ibuprofen is known to cause liver damage, and if it’s used with acid reflux drugs or antibiotics, that risk is 6 – 9 times greater (source).  Ibuprofen has also been associated with stomach upset, gut damage, and vomiting in up to 1.5% of people, plus ulcers, high calcium levels, heart failure, and more in a very small number (source).

Ibuprofen is also associated with an increased risk of complications in chicken pox (source).

One study shows that the common practice of alternative ibuprofen and acetaminophen is unnecessary (as fevers are generally beneficial) and that it increases the risk of kidney damage.

Tylenol (acetaminophen) isn’t better.  It’s been shown to decrease cellular levels of glutathione, a key antioxidant needed for the immune system (source, source).  This may be why regular use of Tylenol is associated with a greater risk of asthma (source).

High doses of Tylenol can cause liver failure; and in fact, the drug is responsible for half of all cases of liver failure (source).

Doses of acetaminophen in pregnancy and in the first 6 months are also linked to the development of asthma — and, it’s not the illness they’re treating that’s increasing the risk, it’s the drug itself (source).

Annually, there are over 78,000 ER visits, nearly 33,000 hospitalizations due to overdoses of acetaminophen (source).  Over a third of these were accidental — the person thought they were taking an appropriate dose.  This is a rate of 13 – 15 hospitalizations per 100,000 population, which is high!

These are the two most commonly-used OTC drugs, and they are associated with serious side effects!  Side effects that most mothers were never told about. Why Are Drugs Used So Easily?

I’ve only covered two drugs here, but there are several other parents use often.  And, they’re told these drugs are perfectly safe, even for babies, no concerns.  Yet, we see that’s not true at all.

But we fear illness.  Unnecessarily.  And we reach for drugs quickly and easily, and we don’t question them too much.  Yet, obviously we should.

Drugs are not harmless, and should not be used so casually.  When a child is ill, the decision to use medication is a really important one, not something to take so lightly.

Luckily, the choices are not “use drugs or let them suffer.”  There are other choices!

There are several herbs and other natural remedies that can help children (and adults) to feel better quickly, and to be able to rest well.  They’re not magic, and they don’t work immediately, but they aid the body in mounting an appropriate immune response and helping to get rid of the illness a little faster (if used correctly).

Many families are interested in natural remedies, but feel like they just don’t know where to start.  And no one wants to let their kids suffer when they don’t know what to do — so they do what they know, which is usually OTC drugs.

Check out How to Get Started with Herbs.  Or you can grab my favorite herbal remedies at Earthley!

Plus, check out this short video of one of my favorite, easiest, cheapest, quickest, most versatile remedies ever!

Has over-the-counter medicine harmed your child, or someone you know?