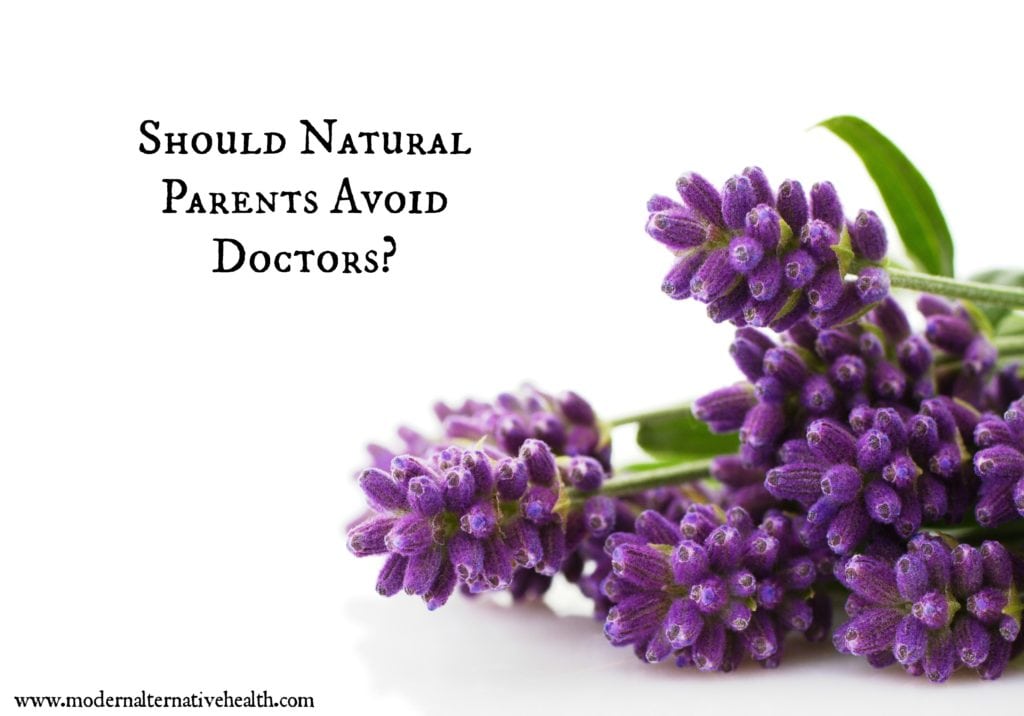 Whenever I share about my preference for alternative and natural remedies, I have a few supposed medical professionals (I find it hard to believe that a busy medical professional uses their free time to troll the internet, but I guess it takes all kinds) yell at me that if I prefer home birth, or to avoid vaccines, or use herbs, that I should just stop seeing doctors all together.  Apparently, if you feel that you should have the right to informed consent, and to choose which medical care you’d prefer to receive, you should be denied care.

Funny — I didn’t think Western medicine was a one-size-fits-all system to submit oneself to.  That it was all-or-nothing.  I thought it was a system of caring, compassionate individuals, who respected patients’ rights and cared about their very different needs and helped them to receive the care that is right for them, no more and no less.

Guess I was wrong.

Unfortunately, there is a very worrying trend of doctors who are speaking up and saying “My way or the highway.”  Basically, if they recommend particular care (drug, test, procedure, vaccine) and you refuse it, they will kick you out of their practice and refuse to provide care for you anymore.

While, sure, doctors can make the rules about who they want to care for — private business, after all — I think that this speaks volumes about the way doctors view patients, and themselves.  They are the experts; we are there to do what they say.  Or else.

Honestly, this leaves natural-minded parents in a bit of a predicament.

Many parents feel like they need to have a doctor.  They need to go to regular well-checks and establish a relationship.  The reason for this is generally two-fold:

One, they want to have a doctor around just in case anything really bad ever happened.  But, I ask you, if your doctor was one of the type above…would you even trust their recommendations in that case?  If not, no reason to see him/her now.

Two, to avoid being reported to CPS or similar services.  Many people are a little too authority-happy these days, all too eager to call on families who are “a little different” over seemingly nothing.  We’ve personally known families who were called on for homeschooling, not vaccinating, allowing their children to play in their own front yard, elementary-aged children playing outside without a jacket, and similarly ridiculous reasons.  Should CPS get involved, having a “paper trail” proving you get regular medical care, and are not medically neglecting your child, can be helpful.

Notice that in these two reasons, neither is because the family thinks that these visits protect the child’s health right now.  The first reason does deal with health, but parents need a doctor they actually can trust, and not just “someone” to see to prove a point.

Unfortunately, we’re seeing more and more of the type of doctors — often driven by insurance companies or new laws — who believe that patients exist to do what their doctors tell them, and who will be dismissed if they don’t toe the line.

What is that nonsense, anyway?  In what other industry would we accept that we have to do what we’re told, without question?  If an auto mechanic told us to replace the entire engine in our car, would we do it immediately?  Or would we get a second opinion?  I can’t imagine anyone would take the word of a single mechanic they did not know or did not trust on such an expensive fix, without question.

We’re being asked, by some, to choose between doing what we’re told…without question…or be left with nothing. Because clearly, if we prefer not to get vaccines or to get a prescription for every sniffle, we don’t deserve any medical care at all.  Right? I don’t think we should allow ourselves to be treated this way.

The very idea that we don’t have the right to decide what goes on or in our own bodies, in the form of medical care…that it’s “take it or leave it,” is cruel.  Everyone deserves the right to make their own decisions in these matters, hopefully with the help of an understanding and sympathetic doctor, who treats the person and not the illness.

If the choice we’re left with is doctors who will bully and mock us, and who will refuse to care for us if we do not toe the line they set out (be it vaccines, or statin drugs, or routine induction, or any other “standard of care”), then we would be better off avoiding them entirely.

There’s really no room for such doctors, or the “care” they provide.

This leaves patients in a predicament, one that many natural-leaning mamas face often.  When their child is ill…what do they do?  Do they risk taking them in, so they can be bullied over their choices and given a solution they don’t want?  Or do they stay home, and risk missing something that is truly serious and requires assistance?  It’s a very, very tough call for many families to make.

This means that some children, who do honestly need care, will slip through the cracks.  They will slip through the cracks because their parents are legitimately afraid of how they will be treated.  And worse, much worse, is not the fear that they, as adults, will be bullied. Most parents are willing to deal with that when they know their children honestly need help.  The real worse part is that if medical professionals disagree with the parent’s decisions or opinions, they can have custody taken away from them.

That in and of itself, drives many people away from doctors’ offices and hospitals.  They will avoid the system to keep custody of their children, or at least prevent a stressful and unnecessary intrusion in the form of an investigation of their family and parenting.

The medical system has set up and “us-vs-them” mentality.  Too many doctors think parents are brain-dead sheep, who ought to be just smart enough to know that they don’t know much, and ought to simply listen to the doctors.  (Obviously there are many exceptions to this, in the form of caring and compassionate doctors.  This is not about them.)  But, parents never know who they’ll get — will they find one who is open-minded and compassionate?  Or will they find one who thinks they are stupid and ought to fall in line with doctor’s protocol?

It’s nerve-wracking, and it’s easier to simply avoid the medical system than deal with all of this.

And yes — it does matter.  In my area, there are many doctors and hospitals, so if there’s a bad one, it’s easy to go to another, this has helped me find a great one in my area, one that uses a great healthcare system included, which assures better doctor-patient understanding.  But not all parents have that luxury. In some areas, there’s one option, or a small handful of options, and none are good.  They deserve better.

It’s not always possible, nor advisable, to always avoid the medical system.  There are times when care is needed, typically in emergency situations.

I propose that parents arm themselves with important information about what’s serious and what’s not, including warning signs of “when to call” so that unnecessary doctor’s visits are not made.  I’ve spoken to mainstream medical professionals who’ve told me that many of the cases that come in for sick visits do not need to be there.  Parents need to be informed about what truly constitutes a “need” to visit.

I further propose that parents learn how to treat the simple stuff at home.  Arm themselves with herbs and other natural remedies to treat the bumps, bruises, sniffles, and tummyaches.  These things rarely need medical attention.

Finally, when it comes to involving medical professionals, do not be bullied.  If any doctor becomes arrogant or tries to force something on you or your child, demand they back off and leave immediately.  “Fire” them if they are a primary care physician and do not go back.  Tell everyone who they are, by name and location.  If what they have done is egregious enough (if they actually force a procedure and not just verbally coerce), report them to the medical board.  Hold them accountable for this abysmal behavior.

If we, the people, refuse to allow doctors to treat us this way, then they will slowly stop.  Doctors keep bullying people because they think people will take — because most of them do!  Most feel like they “have” to listen to the doctors.

But hear me now.  Doctors have no authority over you.  They are no different than hiring any other professional.  You would not let a teacher bully you, or an electrician.  Doctors should not bully you either.  It stops when you say it stops.

Bottom line, the question isn’t, “Should doctors fire patients who refuse to vaccinate/comply,” it is, “Should patients allow doctors to force them to make medical decisions with which they are not comfortable,” and the answer is a resounding NO.

Should natural parents avoid doctors?  Do you avoid them?