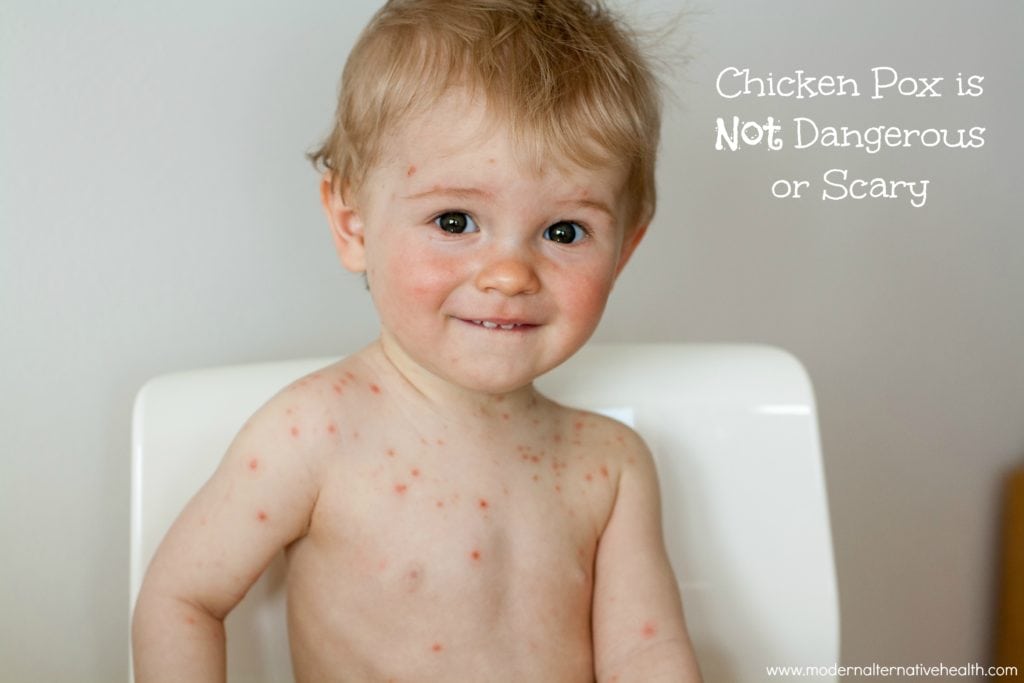 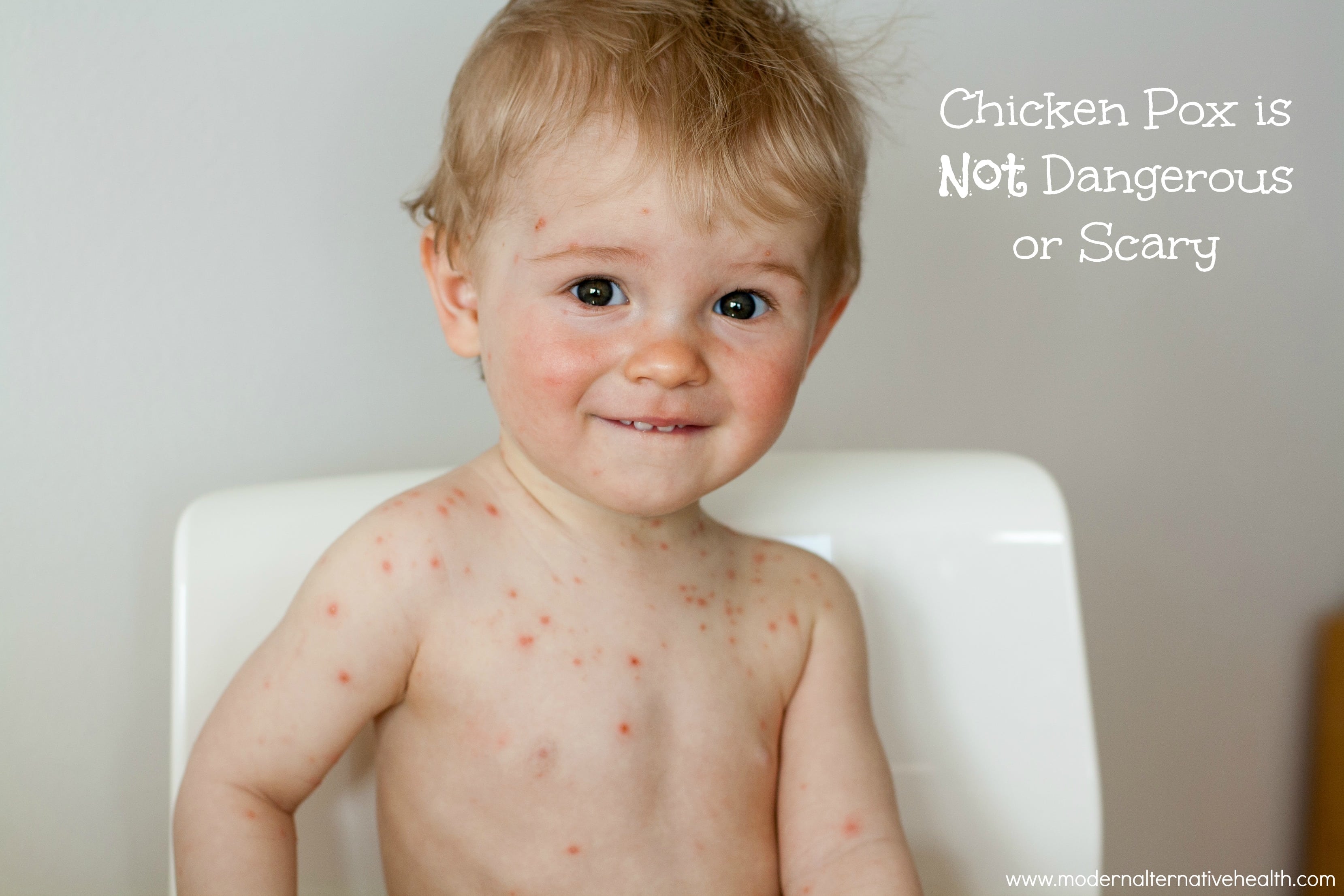 On social media right now (and in some of the mainstream media), a woman’s photos are making the rounds.  The woman is Kayley Burke, and she’s shared pictures of her infant son, with a rare and serious reaction to chicken pox.  He’s now been hospitalized with a secondary infection.

Kayley blames “anti-vaxxers.”  In fact, she specifically says, “…if you don’t vaccinate your kids your a bloody idiot.” 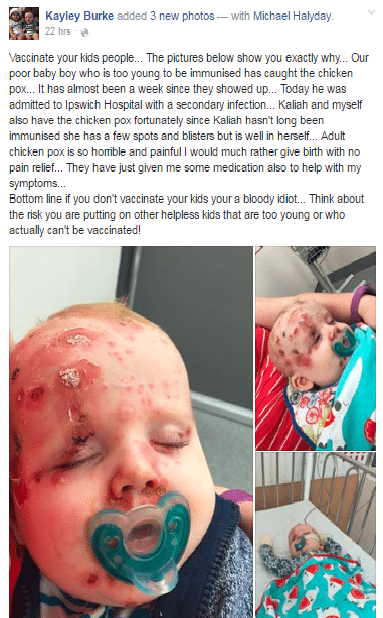 I am sorry that Kayley and her son are going through this.  No one wants to see their babies sick or suffering.  I understand she is feeling poorly (also having the chicken pox herself), stressed out, and upset.

I also know that the mainstream media is going to pounce on this, and call out “anti-vaxxers” and tell them it’s their fault and that they need to know what chicken pox “really” looks like.

This is incredibly irresponsible, and the media, not being personally involved, has no excuse for it.  But, scary stories make headlines, so they’re going to use what they can to get the clicks and stir up some anger.

Parents deserve better than this.  So, we’re going to take a much closer look at chicken pox, and Kayley’s story.

Going off the Facebook post, there’s not a lot we can say for sure.  But it does say “…Kaliah hasn’t long been immunised….”

How recently, exactly, was the little girl vaccinated?  She has chicken pox, too.  Either she was vaccinated months or years ago (I don’t know how old she is) and her vaccine didn’t really work…or she was vaccinated within the last few weeks, and is having an adverse reaction to the vaccine, in the form of atypical chicken pox.  If the latter is the case, then she most likely passed chicken pox to her brother.

This study shows that chicken pox that occurs 15 – 42 days post-vaccination is often due to the shot, and that it has been passed to others as a result.

As for the mother…I don’t know how old she is, either.  She’s probably under 30, which means that she was probably vaccinated for chicken pox as a little girl (the vaccine came out in 1995).  It’s unlikely that she had chicken pox naturally, or she wouldn’t have it now.  So either she never got it and was never vaccinated…or she was vaccinated, and her vaccine wore off/didn’t work.

This is really important, because a lot of people are going to share this, with the very limited information we have, and jump to some serious conclusions about vaccines and people who avoid them.  Don’t do that.  There’s nothing in this story that “proves” anything.

What about Kayley’s poor boy?

It’s obviously horrible that he’s experiencing complications.  No parent wants to see their child go through that.

However, his reaction is really quite rare.

My own children have all had chicken pox.  They were nearly 8 (oldest) to 5 months (youngest) when they had it.  Not a single kid ever had a reaction like that, or any complications at all.  This is just not something that is “typical” with chicken pox.

This study shows a rate of severe complications of less than 1 in 100,000.  The rate for skin infections, specifically, was about 1 in 500,000.  This study shows similar rates.  (The second study also shows that 5 children died of varicella, an incidence rate of about 1 in 2 million, and that 4 out of 5 of those children had pre-existing conditions.  In other words, it next to impossible to die of varicella if you are healthy.)

This study claims a varicella death rate of approximately 5 in 10,000,000 (or 1 in 2 million) prior to the vaccine’s licensure, which is consistent with other studies.

As it turns out, the use of ibuprofen is associated with a sharply increased risk of severe skin reactions like this (at least doubled, possibly tripled).  This study explains it.  We don’t know if the mom used this, or not, but it is commonly recommended that parents alternate acetaminophen and ibuprofen for fever — so it’s possible.

Check out this story — the little boy looks like he’s had a similar reaction, and in that case, it was confirmed to be due to ibuprofen use.

Basically, this kind of skin reaction is super rare, but the chances are increased if you use OTC medication.  Most mainstream parents do, so she probably did — obviously intending to help.  I’m sure she didn’t know.

The varicella vaccine itself isn’t super effective (source).  It drops below 80% within 10 years of having been given (possibly why the mom got chicken pox).  Plus, routine varicella vaccination, due to protection waning early, has led to a proportional increase in shingles cases, so it’s a net wash.

Additionally, this study shows that the rate of severe complications to the varicella vaccine is 2.6 per 100,000 doses; which, while rare, is far higher than the rate of severe complications from the disease itself.  A child who receives 2 doses has roughly a 5 in 100,000 chance of a severe reaction to the vaccines, vs. fewer than 1 in 100,000 chance of severe reaction to varicella.

At any rate.  The vaccine doesn’t work all that well, can cause atypical varicella, can cause secondary varicella in family members, and is more dangerous than varicella itself.

It’s important to remember that ibuprofen should not be used to treat pain or fever with varicella.  As noted above, it increases the risk of complications.

The best course of action is the old-fashioned baking soda or oatmeal baths, plenty of anti-itch lotion (we used a salve made of calendula, chamomile, and lavender), herbal tea (try lemon balm) and lots of rest.  It’ll run its course in 5 – 10 days.

I do feel bad for this mother.  She got some poor medical advice, and now her baby is suffering.  I hope that he, and she, feel better very soon.

Do you think chicken pox is not dangerous, or does it worry you?