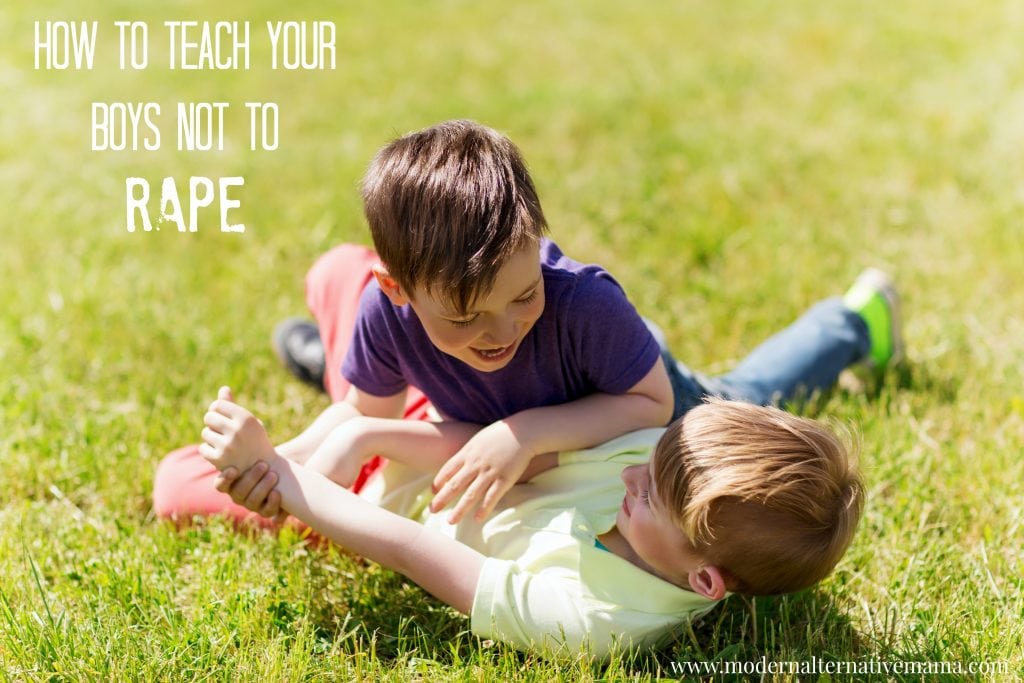 How to Teach Your Boys Not to Rape

The world is all abuzz with the Brock Turner rape case right now — the fact that he was caught in the act, and yet received only a six-month sentence for it.  (There’s a petition to remove the judge from the bench — the one who handed down the sentence.)  I’m actually slightly happy about this case, not because of the sentencing, but because it reportedly occurred in a frat house, and instead of ignoring it or egging him on, other men actually called the police and then restrained him until they showed up to arrest him.  As it should be.

Anyway, the important thing here, for me, is not what Brock has or hasn’t done.  The judicial system and the angry mobs will deal with him.  What’s important as a mother of 4 boys, is teaching my sons not to rape.

I don’t want to be in a courtroom 15 or 20 years from now because my son has been accused of raping some woman.  I want to impact them now when they’re young (my oldest boy is almost 7), and teach them it’s flat-out wrong, so that never happens.

It’s both easier and harder than you think.  A lot of people talk about “rape culture” and they mean the whole good ol’ boys nonsense and people who say “it happens in frats all the time so it’s fine” or “he was drunk, so it doesn’t count.”  But it actually is much more insidious and starts much younger than that.

This is stuff that all parents should be teaching boys and girls, by the way, so that neither is a victim nor victimized.

How to Teach Your Boys Not to Rape

#1) His Body Belongs to Him

The first and most important thing you must teach your children is that their bodies belong to them.  It is not for parents, or doctors, or anyone else to force things onto them that they don’t like.  If something must be done (like a medical procedure), every attempt should be made to explain what is happening and why and obtain the child’s permission.

If things are constantly done “to” a child without his/her permission, they will grow up thinking this is normal and will internalize that something is wrong with them for feeling weird or trying to refuse.  His body is his, and nothing unnecessary should ever be done without his (or her) permission.

#2) Other Peoples’ Bodies Belong to Them

Likewise, other peoples’ bodies belong to them.  No one has a right to interfere with someone else’s body if they don’t you want to.  This means if a child says “Don’t touch me,” teach your child not to touch them.  It doesn’t matter if they are trying to be nice, just trying to hug them or pat them, they cannot touch someone else without their permission.

(The only exception being cases of immediate danger — if someone is about to walk in front of a moving car, grab them and apologize later!)

If boys grow up thinking it’s okay to grab or hug people or otherwise be physical with them even when the other person doesn’t seem to like it, because they are “being nice,” then they will think this can extend to other physical actions, as well.

Plenty of us grew up being forced to hug or kiss Grandma or Aunt Ruth.  But NO!  No forced affection!  We should not have to touch, hug, or kiss anyone that we do not want to.  If we force kids to display affection they don’t feel, they are more likely to think this is normal, and either force it on others or allow it to be forced on them.

Instead, ask children to wave, or offer a high-five, or whatever they’re comfortable with.  Many will verbally say “hi.”  Many will jump in once they’ve had a chance to get to know the other person.  It is possible to greet people politely without having to show physical affection.

This is really important — no means NO.

Sometimes my boys try to hug or grab each other, especially the youngest boy (who is 1).  He screeches and pushes them away.  They complain to me “I was just trying to give him a hug!  I’m trying to be nice!”  And I tell them, “He is telling you no when he pushes you away.  It doesn’t matter if you are trying to be nice, listen to him and don’t touch.”

This also applies to adults, with physical games or teasing.  If an adult is tickling or playing and a child says “no” or “stop,” then the adult needs to STOP.  Otherwise, children learn that no doesn’t really mean no; it means “I know him/her, we’re just playing, it’s fine to keep going.”  This can lead to them thinking that a woman didn’t really mean no when she said it…that she just needed some convincing.

On the flip side, consent matters.

We allow our boys to get physical, and fight each other, or other boys.  We ask, “Is everyone okay with this?”  If the answer is yes, then they are free to go ahead.  Boys are physical, and there’s no reason they shouldn’t be.  They just need to make sure that everyone involved is fully on board with whatever’s happening, and stop if anyone becomes hurt, overwhelmed, or simply does not want to continue.

Obviously, this applies to sex as well.  If their partner is enthusiastic and on board, there is no problem.

Knowing correct names for body parts sets them up to know their bodies and how they work.  It’s a great way to empower them, by taking ownership of their bodies and understanding them.  Plus, children who can say “Don’t touch my penis” are less likely to be victimized than children who can’t or won’t.  This protects them at all ages, in many ways.

#7) Open Communication About Sex and Intimacy

Hiding sex and pretending it doesn’t exist is stupid.  Humans have sex.  They like it.  Children will grow up and be the same someday — they will face physical temptation.

Letting them know this is normal and okay, and that there are healthy and safe outlets for it is important.  Keep the conversation going, starting with naming body parts in the early years, to acknowledging that touching feels good, to discussing the importance of choosing when and with whom to have sex carefully as they grow older.

#8) Sex is More Than Physical

Sex isn’t just something that people do casually — or, in my opinion, it shouldn’t be.  It’s a big deal to get that intimate with someone else.  My kids aren’t at this age yet, but we’ll tell them honestly about the benefits and detriments of having sex too soon, too young, or with multiple people.  Many people have been hurt because they thought the relationship was something that it wasn’t, and they found that out only after having sex.  It’s not something to take lightly.

#9) Be Empathetic to Them

Ultimately, rape isn’t about sex.  It’s about power and control.  All of the things above can make people more likely to rape, but plenty of people have had teasing that goes a little too far or haven’t had consent emphasized and yet do not become rapists.

Narcissists are more likely to rape people.  These are people who don’t care about others and who just want to be in control, have power, and hurt others.  They, themselves, are hurting and trying to overcome it.  Being drunk makes it worse because they lose inhibitions too.

As a parent, being empathetic and sympathetic to children, really listening to them and caring about them, and teaching them respect, love, and gentleness, is so important.  People who are emotionally healthy and loved do not rape others.  They don’t need to — they have nothing to fight against, and real intimacy and relationships are too important to them to mess up.

Ultimately, what you model is what your kids will absorb.  If men treat women like they don’t matter — cutting them off when they speak, being overly harsh, making lewd comments about women in public — then boys will see that and absorb that and treat women the same way.  They will be at risk of becoming rapists if their fathers or other men in their lives mistreat women.

If their fathers and other men are respectful, listen to women, do not make lewd comments, and display gentleness towards women (and hopefully, respect towards other men as well), then they will, too.

Teach your daughters, too, to expect that the men in their lives will treat them well, and to refuse to be around men who don’t!

It’s really not that hard to teach your sons not to rape.  Their bodies are theirs; other peoples’ bodies belong to other people; listen to peoples’ words and opinions, and respect what they say.

How do you teach your boys not to rape?