Why We Need to Stop Saying “Plans Change” |
AD 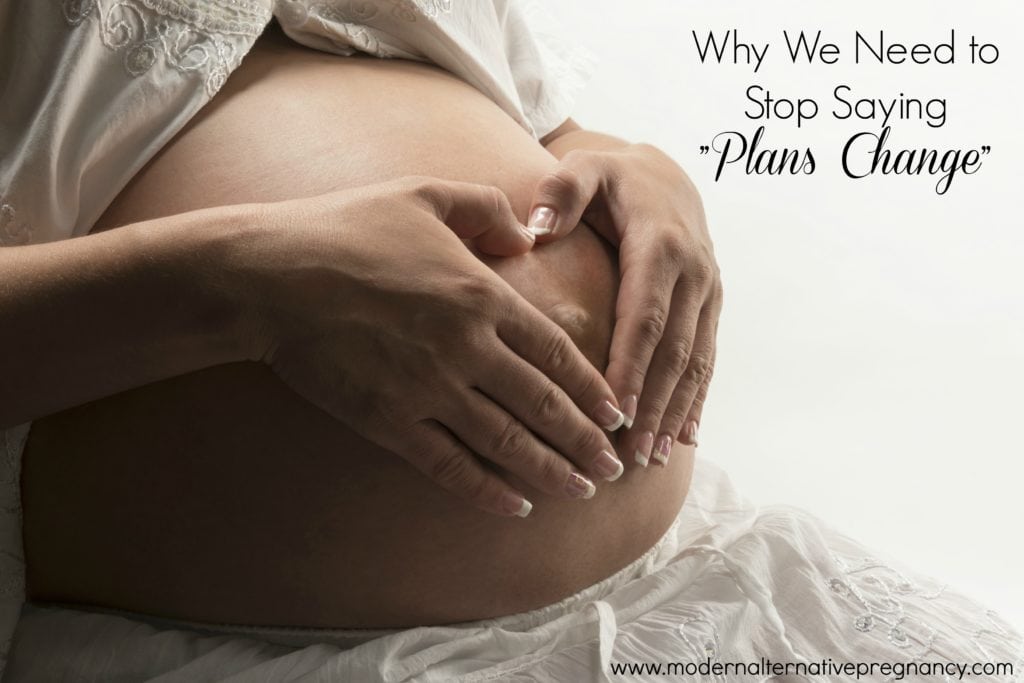 Why We Need to Stop Saying “Plans Change” When I was an expectant first time mother, I was planning and hoping for a natural birth.

Unfortunately, I was surrounded by a whole bunch of mainstream people, and had a very mainstream doctor, so I heard all of the things that pregnant women often hear:

Why We Need to Stop Saying “Plans Change”

That pregnancy, with no support for my natural birth plans, I ended up submitting to whatever the hospital and the doctor said.  I wasn’t given informed consent; I was told to do it or leave.  (Literally.)  I was given Nubain, an epidural, had my water broken, Pitocin, and continuous monitoring.  I pushed flat on my back and my baby was taken from me seconds after birth and not returned for nearly an hour.

It was okay.  We were both healthy.  I was depressed for months, didn’t bond with my baby right away, she had sensory issues, and it took us 6 weeks to figure out breastfeeding, but that doesn’t really matter, right?  We both survived.

With my later babies, I made sure I was surrounded by people who actually believed in natural birth.  Who trusted the process, who supported me, who told me I could do it, rather than “Plans change.”  All four of my boys were born naturally, at home.

Therein lies this issue with this phrase: it is a total lack of support and it undermines moms in a serious way.

Look, of course plans can change.  Everyone knows that.  There is no mom on earth who believes that she can control every aspect of her pregnancy and birth.  There is simply no way.  What she does believe is that it’s important to make a plan, to have an ‘ideal’ in place, to shoot for.  And then, if and when things come up, she’ll adjust.  Many moms even make back up plans for what they’d like to happen if things do go wrong (such as making sure a support person is in the room for a C-section). In actuality, all the women I know are realistic.  They know that there is a plan for ordinary circumstances, supposing all goes well (and, it probably will).  They also know that things may change!  They read books, and discuss different scenarios with their care providers.  They make back up plans.  They are ready and willing to roll with it, should there be a true medical need for interventions.

When someone, who likely knows little to nothing about that woman, her circumstances, her plans, etc. hears that she is planning for a natural birth and responds with “Don’t get too caught up in plans; things change” they are undermining her.

Women need support for their natural births.  They need to know that, as long as things are going well, people will support them and help them through.

Even a healthy, normal birth is tough.  It’s a lot to work through.  There are moments where every mom feels like she can’t do it — which usually means it’s almost over!  That mom needs people surrounding her and saying, “You can do this.  You were made for this.”  People who can rub her back if it’s sore, hold her hand, tell her it’s okay to scream or yell.

When someone dismisses a mom’s desire for a natural birth with “plans change,” they’re telling her more than they think they are.  They are telling her that something is likely to go wrong.  That she can’t handle it.  That birth is bigger, harder, scarier than she thinks.  They are undermining her confidence, and that is a big deal, especially for a first-time mom.

If you are someone close to her, share your story with her, listen to her ideas, help her come up with her birth plans for her ideal birth and her just-in-case situation.  But support her desire for a natural birth, don’t dismiss it.  “Plans change” should not be your first response.  Discuss her ideas first, listen to her plans, help her come up with the best-case-scenario.  And only then can you ask, “What are your preferences if something does change?”  I had that conversation with my care providers in each pregnancy, but it was always after quite a bit of talk about what my ideal plan was.

Remember: a pregnant woman tends to receive advice from tons of people throughout her pregnancy.  Every woman wants to ask questions about the belly and impending baby, and offer some tidbit of wisdom or ideas.  This means that she might hear dozens of people saying to her “Plans change” throughout her pregnancy.  It isn’t just one person.  That’s a really big deal, in time.  If you have a whole bunch of people telling you that you can’t do something…you start to believe it.

And if plans do change, you won’t be the one in the delivery room with her, making the decisions.  That’s up to her, her partner, and her care providers.  Be supportive.  Maybe more women would feel confident and be able to deliver naturally, if only they felt they could.

How do you feel about “plans change?”