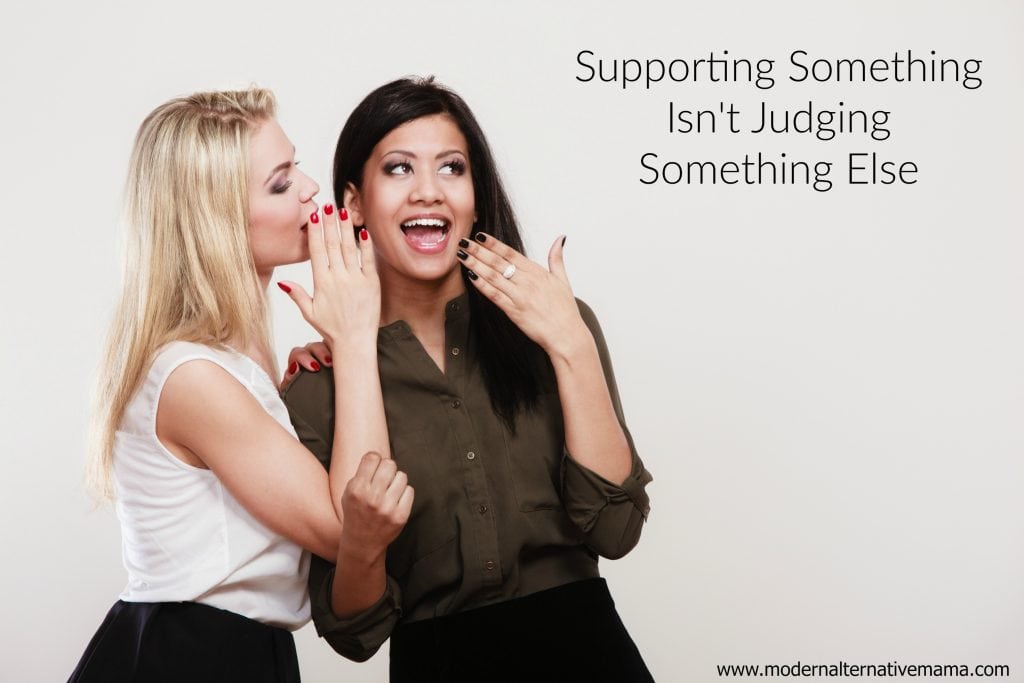 It has to be said.

It absolutely, really, has to be said at this point, because it’s getting ridiculous.

I’m someone who basically always reads the comments.  Always.  Understanding what people think, and what the “consensus” of the reaction is to any news or information interests me, almost more than the story itself.  I want to know how people perceive it.  It matters to me to understand how the world thinks, if you will.

This last one happens most often when it comes to parenting topics.

If there’s a study out there that says that breastfeeding is beneficial, you better believe that there will be tons of moms all over it, saying that it’s rude, unnecessary, judgmental, that it’s flaming “mommy wars” and shaming mothers who can’t/didn’t breastfeed, and that we really should all just stop and “support each other.”

It’s gotten to the point where no one can stand up for anything without someone screaming “Stop that!  We need to all just support each other!  It’s hard enough without this kind of judgment!”

Facts and Opinions Are Not “At” You

Here’s the thing.  We learn by sharing new information and ideas.  These things are not “at” you or anyone in particular.  They are just information out there, to read, understand, and apply if desired.  Don’t like it or agree with it?  That’s okay, file it under “no thanks” and move on.

Unfortunately, a whole lot of people take things super personally.  Seeing that breastfeeding has benefits can send some women into a spiral of anger, self-doubt, and frustration.  They feel like this new information is personally calling them out for choosing not to breastfeed or being unable to do so (especially the latter).  But really, this is not about you.

We must be able to share information and ideas without people taking them so personally.  Some people will even say that certain topics shouldn’t be discussed at all, or that we “know enough” about something and don’t need to talk about it again (of course, there are always people who are just finding out, so we must keep talking!).  This is the only way that we can learn anything!  And it really isn’t “about” anyone specifically!

Not All Choices are Equal

Many won’t like me saying this, but it’s true.  Not all choices are equally valid.

Choosing not to strap your child into a car seat is not a valid choice.  That child is very likely to get hurt, and in a car accident would be likely to die.  That is a serious safety issue, not a “parenting decision.”

There are other issues that are clear health and safety concerns where all choices are not equally valid.  Pretending that they are equal does everyone a disservice.  Some things really are just about health and safety and saying that any option is “fine” because “it’s a parenting decision” places some children at real risk.  We have to be able to share that information (nicely) so that children are safe.

We promote what we believe in and what we practice.  That isn’t going to change.  Not every source is going to be “fair and balanced” and present an equal view of all issues as if every option or choice were the same.  In fact, basically, no source does that.

But, honestly, if you constantly find yourself feeling upset and judged by a particular source, or a particular topic…don’t insist that that topic stop being discussed or that the source change to be more “open” or “represent all viewpoints” or “stop shaming and start supporting.”  Choose, instead, to remove yourself and stop reading their opinions!

Pretty much, everyone is always offended.

Seriously, you can always find someone, on any topic, who is offended.  You could share a cute story about a family’s new puppy, and there would be someone who would say that owning animals at all is cruel and that the story was horrible and shouldn’t be shared.

Really, we just need to move beyond this nonsense.  If something doesn’t jive with you or apply to you, then move on.  It really doesn’t require an argument.  It isn’t personally judging you.

Rare is the time that something is so offensive that it needs some kind of response.  Most of the time, it truly is just easier to move on.

Anyway.  Let’s just make a pact that we will share information and ideas, we will not consider them judgment or shame, we will learn together, and do better when we can.  Okay?