Why We Destroy People Over Mistakes |
AD 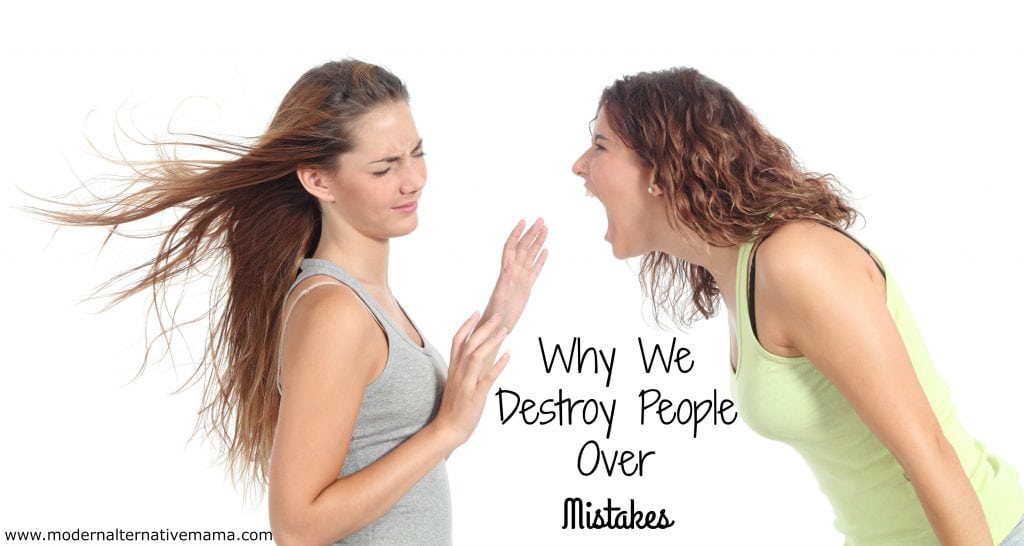 Why We Destroy People Over Mistakes

Right now, the internet is all abuzz with the story of the little boy who fell into the gorilla’s enclosure at the Cincinnati Zoo. The majority of people are looking for someone to blame for this tragedy — and most of those place the blame squarely on the parents’ shoulders.

Every time I read another news article, and especially the comments on it, I shudder.  I can’t stand this.

There is literally a petition, with nearly a quarter of a million signatures, that is asking for the blame to be legally placed on the parents’ shoulders.  It says that the lack of supervision displayed in this accident at the zoo is likely indicative of a neglectful home environment and that CPS needs to get involved to investigate the family and possibly remove them from the home.

I cannot believe this.  Every single person who signed that petition ought to be deeply ashamed of themselves.  Deeply.  I cannot state that strongly enough.

Because here’s the truth: none of those people were there.  They don’t know what actually happened.  And they don’t care.  They have decided that this mother is a terrible person, and they are demanding that her life is pulled apart because of one, seriously tragic, incident.

Why We Destroy People Over Mistakes

Somehow, we all think we know better.

I read one eyewitness account of this.  Someone saw him getting into the enclosure, but he was so fast that they could not grab him before was too far in, and then he fell.  It really just happened that fast.

Some people have said, “Well, he said he wanted to go in there.”  So do lots of children.  Many wish they could hop the fence and visit.  My own children have certainly climbed up on fences at the zoo, hoping for a better look.  I’ve pulled them down and they didn’t end up inside, but — they could have, if another child had distracted me at the wrong moment.  Children say a lot of things, and there’s no reason to assume that they seriously, actually mean it.  (Do you believe your kid when he says he’s Superman?  When he says he’s going to run away?  Yeah.)

The truth is most likely that this was a terribly tragic accident.  Mom got distracted by something perfectly normal — talking to someone nearby, helping another child, taking a picture, I don’t know — and suddenly, she looked up and it was too late.

Any parent here whose child has never done anything wrong or dangerous because they got busy or distracted for a minute, raise your hand.  I’ll wait.

The other week, I took my kids outside to play in our front yard.  I was sitting at the bottom of our driveway as they rode their bikes.  My 3-year-old ran past with our Little Tikes car, and my 11-month-old started crawling down the incline of the driveway.  I turned my attention to the baby, not wanting him to end up falling and scraping his face up.  One minute later, I turned to check on the 3-year-old, and he was standing on the roof of my husband’s truck.  I quickly got up to remove him.  But it happened that fast…while I was busy making sure my baby didn’t hurt himself.

Sure, no one got hurt.  And no endangered animal got killed.  It wasn’t that big a deal.  But it could have been…if he’d tripped and fallen before I saw him.

Accidents are just that — accidents.  They happen fast.  They happen because people are not perfect and cannot pay attention to everything and everyone happening around them all the time.  It is so easy to know a few of the details of a situation and say, “I would not have let that happen.  I would have known better.”

But in the moment…you don’t know.  That’s why we need grace for these poor parents.

It Wouldn’t Happen to Me

Maybe you say, it really would not happen to me.  I would never allow my child to do that.

It might not be that.  But something could happen.  Let’s suppose that you are having a barbecue with friends, and at the end of the night, you lay the still-hot coals on the grass far away from the party, far away from where everyone is sitting and playing.  Then, suddenly, you hear a scream.  Your baby has wandered over there and has walked onto the coals…then has fallen in pain and used hands to brace herself…and now, her hands and feet have serious burns on them, requiring a lengthy hospital stay.  You had no idea it could happen…until it did.

(This really happened to a family I knew when I was a kid.)

At that point, when you are at your worst, when you are kicking yourself, when you are running through all the scenarios in your head of what you could have done differently...would you want the entire world telling you that you are a terrible parent?  That you obviously should have prevented it?  That they would have?  Assuming it’s even worse than it actually was?

These stories are a bit like the old game of Telephone.  Everyone gets only a piece of the story, then passes it on.  “I heard it was actually…”  “No!  The truth is…” and no one is going off anything more than brief news reports.

Would you want your overall parenting and overall life judged by that singular moment?  For people to assume what is extraordinary, is actually ordinary for you?

None of us would want that.  None of us even want our worst moments seen, let alone for the world to judge us by them.

You might say, “It made the media because it was clearly so bad.  If something bad happened to me, people would understand.  They would show me grace if it was only an accident.”

I have seen it over and over and over again.  Even when I knew the parents and knew the whole story, I saw the media versions and the anger that happened.  I’ve even had it directed at me due to a viral blog post once.  I know exactly how it occurs.

It Needs to STOP

We all want grace.  We all want understanding.  We all want others to think the best of us.  To see when we make a mistake, it is only a mistake.  We want to be judged by what we usually do, and not by our worst moments.

When it comes to others, though, we don’t apply the Golden Rule and extend that grace and understanding.  We are quick to judge.

We want to believe that we are special.  That these things can’t happen to us.  That somehow, if we punish people enough, these mistakes will stop happening.

They won’t stop — that’s why they are called “mistakes,” because they are unintentional — but people will feel anxiety, hanging over their hands, pressing them to be perfect parents, especially in public.  They will feel like they cannot reach out, they cannot ask for help, they cannot mess up.

It only makes things worse for everyone.

Let’s break the cycle.  Offer love and grace to people, especially if you don’t know the whole story.  When a family has a child who is injured because of a tragic accident, don’t pile on a sign a petition asking for their family to be investigated by CPS (seriously, what kind of monster does that?).  Wish them well, and move on with your life.

Just remember: next time, it could be you.

How do you feel about how we destroy people over mistakes?