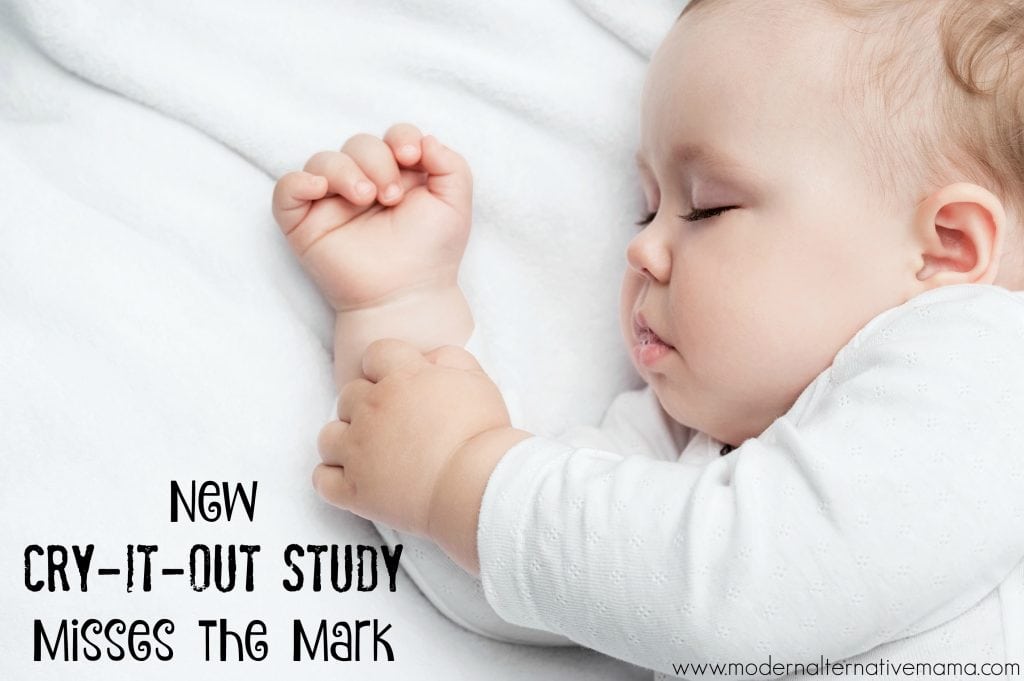 A new study came out in the last few days, saying that cry-it-out is really just fine for babies…and maybe, it’s actually better.

There are so many things wrong with that “study” that I could not let it go.  Parents deserve accurate, real information about parenting practices, and this study isn’t it.  Let’s just dive right in.

Let’s look at this study.

The study was done on just 43 babies.  That’s a tiny sample size, so no firm or far-reaching conclusions can be drawn from it.

These 43 babies were divided into 3 roughly equal groups (14 – 15 babies each).  Group 1 had sleep training.  Group 2 had “bedtime fading” (putting babies to bed gradually later each night, so that they’d sleep easier from being more tired).  Group 3 had sleep education but no specific bed time method.

Researchers did not control for a whole host of variables, including:

With such a small sample size, so many variables uncontrolled, this study is basically useless.  Just straight up, bad science.

The inclusion criteria was “do you think your infant has a sleep problem” on a survey at a pediatrician’s office.  Parents with normal, healthy infants would say ‘yes’ to this, because our society believes babies should sleep through the night from 6 weeks old — which is ridiculous.  And these were healthy infants, as infants with health conditions or developmental delays were excluded.

The majority of the study participants were well educated and upper middle class, and nearly 93% came from two-parent homes.  This is, of course, not representative of the general population at all, further limiting the study’s validity.

Additionally, the study was not blind at all (obviously the parents had to know what method to use, but the researchers didn’t need to — yet, they did know), and parents were allowed to switch groups after being randomly assigned.  (Some parts of the test results later were blinded.)

Why The Study Gets it Wrong

Let’s just suppose that all of that doesn’t matter.  Let’s suppose that the study isn’t poorly designed and that it actually has some merit at the outset.  What about how they measured their outcomes?  What about their original premise?

The entire study is based on a behaviorist theory of child-rearing — much of what our society believes about raising children today comes from the behaviorists of the 1950s.  These psychologists effectively thought that it was possible to ‘train’ people by using methods like rewards and punishment to encourage or discourage behavior.  They told parents not to hold their babies too often, to schedule their feedings, and to be basically hands-off.  It was “scientific parenting” and supposedly better.  It did not take into account babies’ actual feelings or emotional needs; only their physical needs.

In the study’s introduction, the researchers suggest that babies wake more frequently at night because of a “coercive behavior trap,” because the parents’ responding to the infants is more ‘rewarding’ than getting sleep.

I’m almost ready to just stop there, because that’s so ridiculously stupid, I don’t even know where to start with it.

This is obvious behaviorist nonsense.  It talks about the relative rewards/consequences as the motivator for infant behavior — no mention (nor understanding) of intrinsic biological need.  Infants don’t just decide to wake themselves up and cry for their parents to manipulate them!  (Not any more than any of us purposely wake ourselves at night, when we’re tired, because maybe watching TV is more “rewarding” — seriously?)  Something causes them to wake up — hunger, cold, hot, in pain, afraid, etc.  All they want is for their need to be met.

The introduction goes on and specifically mentions “behavioral learning theory” and “operant conditioning” which are straight up behaviorist psychology.  There’s no question from which premise/worldview they are operating.

I, and many others (including professionals in the psychology field) believe that behaviorism is the entirely wrong way to explain human behavior.  That’s a long discussion for another post, though.

The researchers looked at sleep “results” — how long it took infants to fall asleep, how many times they woke at night, total minutes awake during the night, and their total sleep time.

This varied between groups from about 5 minutes to 20 minutes, after baby was put to bed awake.

This varies from 1 to 2 after 3 months, vs. 2 – 3 at the study’s beginning.  It isn’t very many times and is in line with normal wakings at the infants’ ages (average of 10 months old at study onset).

All infants were awake approximately 45 – 60 minutes at night at the study onset.  Amount of time fell for all groups, to 10 – 30 minutes awake per night.

All infants slept 10 – 10.2 hours per night by the 3 month mark — there was no significant difference between groups.

The only area that was significantly different was “time to fall asleep,” but even 20 minutes is not exactly a long time.

Next, they attempted to measure stress.  However, and this is a BIG deal, they did not measure infant stress during the crying period!  They measured it via cortisol levels in saliva the next morning.  Brief episodes of stress produce spikes in cortisol at the time of the stress, which drop within hours.  It’s expected that all of the infants would have normal levels by morning — and they did.  This is a really poor measurement and does not prove that they did not experience significant stress at bedtime.

Even so, there were no significant differences found in morning and afternoon cortisol levels between groups.  The only thing this proves is that short-term interventions didn’t cause chronic stress.

Finally, on attachment.  Although it is being reported that there was “no change in attachment” among parents in different groups, they didn’t state what the attachment was.

In the cry-it-out group, a whopping 45% of children were insecurely attached!  This was also true of 40% in the bedtime fading group, and 38% in the sleep education control group.  Also, attachment was only tested after intervention, not before, so it’s impossible to know if there was a change that occurred because of the intervention, and if that change was more pronounced in the intervention groups vs. control.

I don’t know about you, but 40% of children being insecurely attached is a big deal to me.  It’s clear that whatever parenting practices these families were using prior to this study weren’t really working so well.

The study additionally notes that although parents self-reported fewer night wakings over the study period, the objective actigraphy (tracking the infants’ movements to know when they are awake) showed no change — suggesting that infants are still waking, but no longer crying for their parents.  Slight waking is common for all humans in the lighter phases of the sleep cycle.  There is no speculation on why infants did not signal their parents — perhaps they outgrew a need, or perhaps they learned that their parents were not coming and stopped trying.

In the studies’ conclusion, it notes that one limitation was that it did not assess bed-sharing infants.  All infants were sleeping in their own space (and most likely in their own rooms, as the researchers note they did not look specifically at co-sleeping/room-sharing). Basically, the study looked at different variations on mainstream parenting, and found that none was really worse than another.

If you’re curious, the full text of the study can be found here.

There is absolutely no way to draw any firm conclusions from a study like this.

We have to ask, too, why nearly half of these babies were insecurely attached.  Clearly, something led to this — was it the sleep intervention or another parenting practice?  Are co-sleeping babies more likely to be securely attached?  We don’t know, as the study didn’t address this.

We’d have to ask a lot of questions about broader parenting practices to really understand anything.  We can’t say cry-it-out is “fine” from this information.

Basically, a lot of people are drawing very broad, far-reaching conclusions from this that just aren’t possible to draw.  Don’t take this seriously, or even waste another minute thinking about it.  It’s just bad science.

How do you feel about cry-it-out?