Mandatory Induction at 39 Weeks: ACOG Has Gone Too Far |
AD 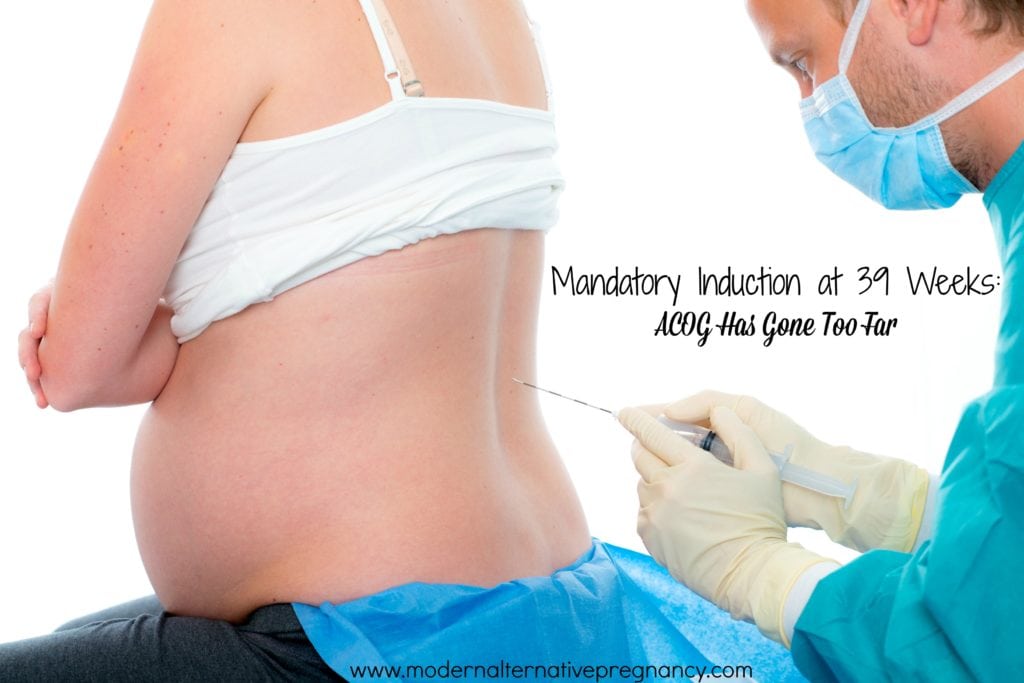 Mandatory Induction at 39 Weeks: ACOG Has Gone Too Far In a special session on Monday, May 16th, a group of obstetricians gathered to discuss an issue.  Their topic was, “Should it be mandatory for women to be induced at 39 weeks?”

This discussion centered on all women, not just high risk women, and they were not discussing ‘encouraged’ or ‘elective’ procedures, but the possibility of making it formal policy that women must be induced at 39 weeks if they have not spontaneously gone into labor prior to that point.

It’s important to be clear that this was a theoretical discussion and no policy has been made and no official statements have been issues.

Even so…wow.  ACOG has gone too far.

Mandatory Induction at 39 Weeks: ACOG Has Gone Too Far

Basically, two doctors are making a case, after reviewing some studies, that all women should be induced at 39 weeks.  I’m going to quickly summarize some of the key arguments they used, because some seriously blew my mind…and not in a good way.

The first doctor said that accurate dating would be important, and suggests that an early ultrasound (8 – 10 weeks) would be necessary since last menstrual period does not always give accurate dating.  He goes on to say that there is no long-term benefit, and potential risks, to continuing a pregnancy beyond 39 weeks.

A major focus is on the risk of still birth, and that it increases after 39 weeks.  But when it came time to explain why, he simply said, “We don’t know.”

This doctor actually says, “Think like a fetus” and goes on to say that the fetus knows that there is no benefit to remaining inside past 39 weeks, and that there is potential risk, and that if the fetus isn’t smart enough to then trigger labor, OBs should intervene.

And then he says that there is little data on the risks of inducing at 39 weeks, and that we don’t know if it increases the risk of a c-section.  But he compares induction at 39 weeks to induction at 41 weeks (closest data available) and basically says, “They’re pretty much the same thing.”  And the reason they are the same…is because the babies are the same size or maybe even smaller at 39 weeks (as if size has anything to do with this).

“This is me, scratching my head, why are we even having this debate?  39 weeks and out is the answer.  …rescued by birth.”

Then the second doctor gets a turn.  He starts by saying he agrees with everything the first guy said.  Then, he goes on to say that that there are clear risks to continuing a pregnancy beyond 39 weeks, one of which was shoulder dystocia — it apparently just makes sense.

Too bad the evidence says otherwise.  This study shows that while shoulder dystocia does increase if the baby is larger (and for several other reasons), length of gestation is not one of the risk factors!

This doctor goes on to criticize studies that exist that look at elective induction at 39 weeks vs women who go into labor naturally, because it excludes women who are induced for medical reasons, and therefore, appears that going into labor naturally is safer.  But, wait — we’re looking specifically at a population of low-risk women!  Including those who required induction for a medical reason would have skewed the data.  He is suggesting the opposite!

He also glosses over the fact that there is no significant evidence comparing induction at 39 weeks vs. 41 weeks — so they are just trying to “guess” right now which is better, and making an argument with evidence that skirts the issue but doesn’t specifically address it.

And then he shows a study where women who underwent current “protocol” (waiting for labor until/unless there is a medical indication or she reaches 42 weeks gestation) vs. women who were electively induced at 39 weeks, which found a c-section rate of 30% in the latter group, and 17% in the former, and called the difference “not statistically significant.”  Since when is an almost doubled rate not significant?!

He goes on to quote another, similar study, that shows no differences between the two groups — but, it is limited to only high-risk women, over 35 years of age.  It’s not really applicable to healthy younger women.

Finally, he concludes, through statistical modeling (not actual data) that elective induction at 39 weeks is “always better.”

Towards the end, the first doctor says, “I happen to think nature’s a lousy obstetrician.”

And additionally, the second doctor says, “We would need very accurate dating — if we were off by even a week either way, it would increase risk.”  Which brings up the question; how accurate were the dating methods used in the women in the studies and modeling that we do have?  If they were off by several days or weeks, then we’re not really modeling by week of pregnancy at all, and the whole thing falls apart.  With an early dating ultrasound not the standard of care, and many women being uncertain about their actual ovulation dates, it would be easy to be off by a matter of several days.

You can watch the discussion for yourself here.

Basically, what they are suggesting is that pregnancies be highly managed from day 1.

Women would require an early dating ultrasound, and potentially more than one if the first was inconclusive.  Currently, ultrasounds can date a pregnancy between 8 and 12 weeks with an error range of 7.3 days.  (Source)

But wait!  That’s not good enough!

If dates could be off by a week in either direction, it would be easy to deliver the baby at 38 weeks (when we know that complications of late-preterm are increased) or 40 weeks (which supposedly increases risks as well).  We currently do not have an accurate enough dating method to deliver women at exactly 39 weeks.

Supposing that we were able to date pregnancies exactly…gestational lengths seem to have some genetic link (source).  So while one baby may truly be ready at 39 weeks, another may not be until 40 or 41.  How do we know which is which?

In general, there is too much variability to be certain that inducing all women within such a narrow window is acceptable or at all in line with best practices.  In an otherwise healthy pregnancy, the only true indication that baby is ready to be born, is the triggering of spontaneous labor.

Obviously, should concerns develop, interventions should occur as needed to prevent a poor outcome.  Women and their care providers would need to know what to look for and be willing to communicate as needed to get tests or care if anything cropped up.

Rather than trying to control every iota of the experience, wouldn’t we be better off finding the biological norms, and then trying to facilitate those?  Shouldn’t we be identifying clear risk factors (none of these studies looked at maternal diet/nutrition, vitamin deficiencies, or other potential underlying causes of issues) and then educating patients on how to minimize these risk factors?

It seems logical that we cannot improve all outcomes, and that we shouldn’t trade one set of risks for another without clear benefit to doing so.  Yet, this is what they’re suggesting.

In general, we don’t trust ACOG, and this discussion is a prime reason why.  ACOG is looking at the data in a vacuum, and interpreting it the way they want to see it.  They are ignoring evidence that doesn’t fit what they believe, and are avoiding asking questions about how and why some of these negative outcomes are occurring in the first place.  All they see is, a negative outcome did occur, and if we “do more stuff” maybe we can stop that.

We need a much more big-picture or holistic view of pregnancy and birth (and health in general).  We need to see what is truly “normal” and what deviates from the norm, and how we can maximize health and minimize outside risk.  Interventions can and should be used in cases of high risk or when symptoms present that require it.  But heavy “management” of a low-risk, normally progressing pregnancy is not the solution.

It is clear that ACOG’s entire worldview and mindset is in opposition to what we believe and what the data we have actually shows, which is why we do not trust their assessment.

It’s sad, that in today’s world, we can’t have a more cautious and judicious use of technology, and that we feel that more is always better.  That simply cannot be true.

We recognize that the debate was a mere exercise, but it represents a thought pattern that is pervasive, faulty, and potentially dangerous to women and babies.  That’s why it is time for women to take back birth, and trust themselves.

How do you feel about mandatory induction at 39 weeks?  Do you think it is a good idea, or not?