Why I Left an Activist Group |
AD 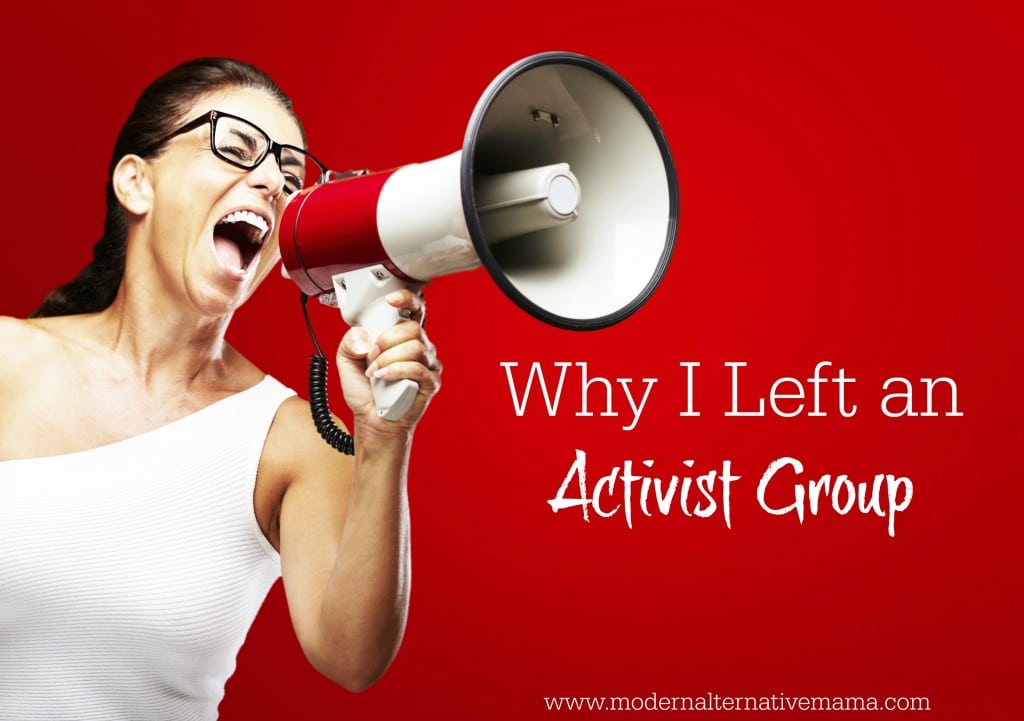 Why I Left an Activist Group

It’s really no secret that I’m an activist.  I mean, I blog about this stuff constantly — medical choice, against spanking, against circumcision, child birth rights…  So why would I leave an activist group?

It’s simple — they were trolling.

Why I Left an Activist Group

I’ve been the ‘victim’ of trolls more times than I can count.  Certain people and groups regularly follow me around on my public pages, and even personal profiles at times, and attack me for my opinions and positions.  They consider me “dangerous” for daring to speak out about vaccines, or in favor of home birth, and so on.

Apparently, since I share my opinions with thousands of people, I have no right to them nor any right to share them.  Because I’m “wrong” and I’m “killing children.”  (Yes, people say that to me.)

Trolling isn’t okay.  And, it doesn’t work.  Trolling just makes people angry, and it makes them more firm in their original belief.  No one has ever been mocked and attacked by a troll and said, “You know, I think they have a point.  I’ve been wrong all along!”

The group I was in was an Intactivist group.  And, they were absolutely trolling.  They regularly shared screenshots of parents who were planning to circ, or who recently circ’d their babies.  They encouraged members to swarm public posts and tell the parents they were terrible people, child abusers, mutilators.  They sent private messages to strangers saying the same things.  They attacked and mocked, both publicly and privately.

I feel extremely uncomfortable with that.  It’s wrong.  There is no situation in which you are so “correct” with your opinion that you are justified in using these measures to advocate for a particular position.  Ever.

I could not be a part of it.  It doesn’t matter that I agree that circumcision is wrong and I wish it wasn’t practiced.  That is not the way to stop it!

A lot of people don’t even seem to know what trolling is.  They can recognize it when it’s done to them, but they actually don’t seem to recognize when they are doing it.  That’s…kind of sad.

Golden rule, people.  If you don’t want it done to you…don’t do it to others!!

So let’s break down what trolling is.  Just so we’re perfectly clear.

Going to Pages Just to Argue

Some people feel like it’s their job to know whenever someone is promoting a viewpoint that is opposite theirs anywhere on the internet.  Whenever an article is posted, or a page shares a question or story, they need to be “on it.”  They ‘like’ the page or follow the site for no other purpose than to wait for the topic to come up so they can argue with people about it.

Look, if you happen upon the topic, fine, weigh in.  If someone says, “I’m confused and looking for information,” offer some.  That’s what normal, healthy advocates do.

Trolls swoop onto pages en masse to fill up the thread with their own viewpoint and try to drown out everyone else.  They try to ‘win’ by being the loudest.

Seeking Out Individuals Who Make the “Wrong” Choice

This is really wrong.

If you personally know someone who is on the fence about a decision or leaning towards one you don’t like, it’s okay to send them a nice, non-judgmental message offering information and a listening ear.  That is normal.

It’s not normal or okay to look for perfect strangers who are making a choice you don’t like, and then get a bunch of other perfect strangers to post to that person’s wall, email them, private message them, etc. to try to influence their decision.  No one ever takes the opinion of strangers seriously!  Especially when it comes to personal decisions.

How would you feel if some completely random person sent you a message saying “You really shouldn’t breastfeed your baby, that’s just gross and wrong.”  Would you take them seriously, or would you be angry and ignore them?

Do not contact strangers with unsolicited advice or information.

Engaging in Name-Calling or Harsh Language

Probably the worst of all is this.  When some “activists” get so caught up in their cause that they start using nasty or vulgar language towards people who oppose them.

I guarantee if you call parents “child abusers,” “sexual abusers,” “mutilators,” etc. that they will not hear anything else you say.  “I’m sorry you don’t really care about your child or his rights, I hope he forgives you someday” is not okay, either.  (And I’ve seen people say this to others.)

If you can’t use better language than that, you don’t deserve to be an advocate.  Because all you are doing is making people angry, and making them more likely to do what they were already leaning towards because you represent the opposition and you sound like a crazy person.  No one wants to follow a crazy person.

The reason this happens is that advocates congregate with other advocates.  They regularly share screenshots of things parents say or do about the issue, such as “Look at my little man just after his circ, poor baby” or “Baby boy due soon, not looking forward to his circ.”  They mock these parents. They call them nasty names.

Basically, they egg each other on, and they privately bully these parents.  Then, they encourage each other to publicly bully the parents by sending them messages and posting to their pages.  Yes, that’s bullying.  When you try to force your opinion on others, and they don’t want to hear it, you are bullying them.  No, it doesn’t matter if you are “right.”

Being surrounded by so many people who say the same things leads them to believe they are right and go to even more extreme lengths than they would have on their own.  Echo chambers can be a dangerous place because they often produce bullies.

How to Advocate Without Trolling

I’m not suggesting we stop advocating.  I’m not going to.  But there are good ways to do it that don’t involve trolling or bullying people!

Share articles on your own page or profile on social media.  Or, write up your own short posts and put them as your status.  Use gentle language, and anecdotes people can connect with.  “I didn’t always know this, and I wish someone had told me.”  Put it out there, and let people come to you if they have questions.

If someone asks you for your opinion, then, by all means, share it.  Again, avoid harsh language.  Share gently and respectfully what you believe and why.  Give them sources to look for more information.  Offer to answer any questions that might come up.

Some people get simple flyers or small cards with some basic info and links to learn more, and tuck them into changing stations, baby books, baby shower gifts, and any other place that new parents might go and see them.  This is completely non-confrontational, as they can take or leave the info and have time to process it.

You need to understand, as an advocate, that some people simply will not make the decision that you prefer they make.  Some people will hear you, and say, “Thanks, but we’re going another way.”

It’s sad — and it’s okay if you feel sad — but do not attack the person, do not insult the person, do not say they are a bad parent or they don’t really care about their child.  Do not act out towards the person.  They may have made the “wrong” choice, but they want respect as a human, for doing the best you can.

The best thing you can do, as an advocate, is leave the door open.  Someone might make a particular decision now, and may later wonder if they should have done things another way.  If you keep that door open, they may come to you and say, “I feel like I maybe shouldn’t have done that.  Can you tell me more about this?”

I have a friend who discussed this very thing with me a while back.  She made a decision because she was young and didn’t know better.  Now, she’s heard some new information and is interested in exploring it.  But, she’s completely and totally turned off by people who say she ruined her child and is a terrible parent for having not known, and can’t even deal with it.  She’s looking for someone to walk her through the info without judging her as a person or a parent.

That is how we all learn best.  We need someone to meet us where we are.  To leave us alone if we do something that disappoints them.  To always be open to discussing with us, if and when we are ready.

If you are a real advocate, a mature advocate, then you will understand this.  And if you think that bullying is justified and will ever work, then get out of the game.  You aren’t ready.  You’re damaging the cause with your immaturity.

How do you feel about activist groups?  Do you see a lot of trolling?