Herbs to NOT Use With Children |
AD 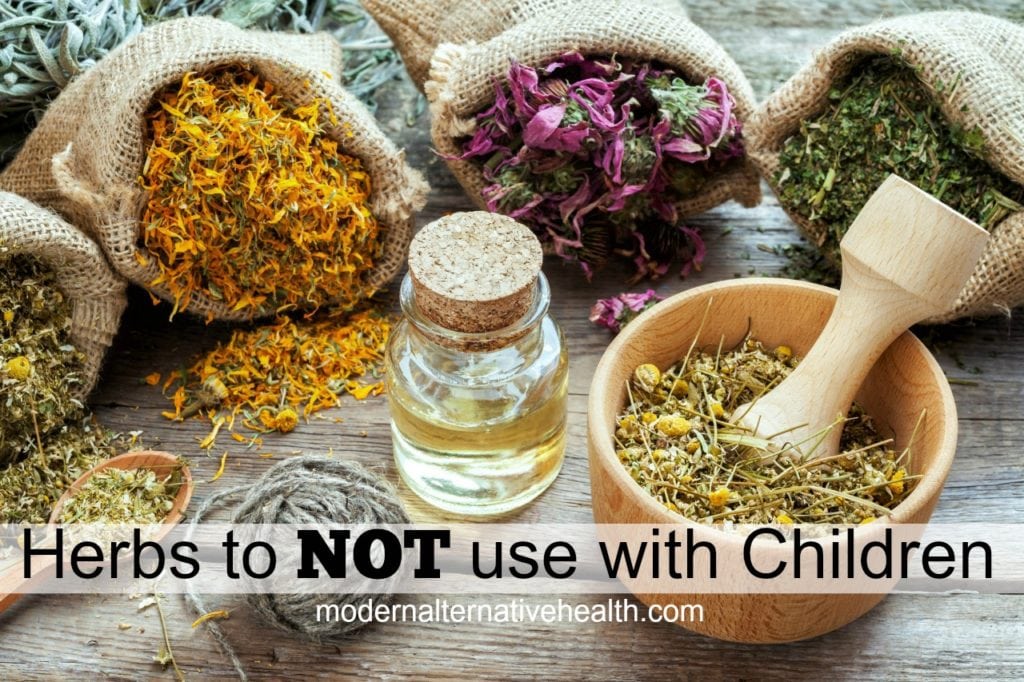 Herbs to NOT Use With Children

When my kids got sick, I used to call the doctor and get a prescription.

Easy enough, and I felt I was doing the right thing. As I got more involved in natural health, I wondered if there was a way to help their colds and coughs at home, with more natural methods. I started studying herbs and found that there WERE, in fact so many ways to help them without always doing to the doctor.

Many parents are now reaching for the all natural herbs and essential oils when their kids get sick.

Natural medicines like herbs have been around for centuries, so they have to be safe, right? Well, not always. There are some herbs that you should NOT use with your children. Surprised? So was I, at first. But, when you start looking at pharmacological actions of each herb, you’ll better understand that some are just not right for their growing bodies. Let’s look at some of them.

Herbs to NOT Use With Children

Herbs to Not  Use Due to Over-Harvesting

Herbs to Usually Avoid with Children

(Arctostaphylos uva-ursi) is often used as a diuretic and a support for the kidneys. The literature supports the use of Uva Ursi for relief of pain associated with kidney stones, as it causes an increase in urine output and smaller stones will often run out. This is not to be given to children under the age of 12, as their kidneys may not be fully matured and able to handle this powerful herb.

Most often used for relief of constipation short term. The side effects of this can be loss of electrolytes, making it often unsuitable for children under the age of 10. A better alternative would be fresh fruits and vegetables and plenty of fiber containing foods and water. [source]

This is most often used for its antispasmodic and sedative benefits. It also has a steep history of being used for female ailments, mainly for balancing hormones. Due to its estrogen like actions, it is often unsuitable for children. [source]

This is often used to assist in treating goiters, as well as as skin conditions such as boils, ringworm, and scabies. Due to its high potency, and being fatal in large amounts, this is often unsuitable for children and should ONLY be used under careful guidance. [source]

This herb is highly toxic. Its fresh berries and leaves can be lethal. Under proper guidance, it can be safe, but should NEVER be attempted to be used by the home health manager. [source]

Herbs to Only Use Externally

This refers to the whole dried flower heads of the plant, as well as the extracts made from these parts. it is suitable for bruises, insect bites and external injuries. It should not be taken internally, nor should it be used externally for extended periods of time. Take a break from using it after 2 weeks.

Note: Homeopathic Arnica, that you can buy over the counter is NOT the same as herbal Arnica. The homeopathic version has been strongy diluted in accord with homeopathic principles, and is safe to take internally.

This is commonly used for bruises, sprains and broken bones. It should only be used externally, and only on unbroken skin. This is because broken skin has more direct access to the blood stream and the alkaloids are hepatotoxic.

Herbs That Are Commonly Allergenic

Those with allergies to ragweed should avoid using chamomile.

As an immune system stimulant, this is unsuitable for those with an autoimmune disorder. Herbs can be a great source of natural healing.

However, a little common sense and knowledge of each herb and its pharmacological actions will go a long way toward keeping you and your children healthy and safe.

What herbs do you use when your kids are sick? Did any on this list of herbs to not use with children surprise you?