A Dad’s Thoughts on Homebirth |
AD 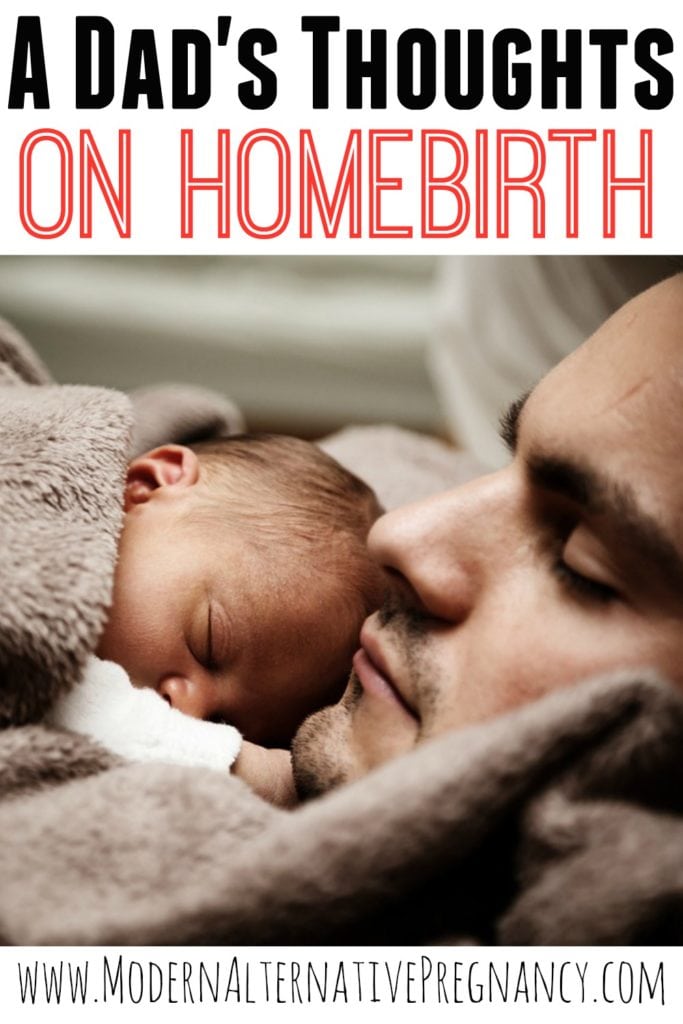 A Dad’s Thoughts on Homebirth

A Dad’s Thoughts on Homebirth

I loved my homebirth and I’d do it again for all fifteen of the babies that I want to have!

I’ve been fortunate enough to have 2 homebirths after a c-section that I was told by my old doctor that I’d never have (take that, doc). My first homebirth was much harder than my second, but it also set up a really interesting conversation with my husband who was my rock in my toughest 12 hours.

It wasn’t until I started nesting like a mad woman at the end of my second pregnancy, trying to get my birth supplies set up, that I realized the toll that it took on my husband.

Now, raise your hand if you’ve ever wanted to punch a husband you’ve seen who, when his wife is in labor, is complaining that his back hurts or that his wife is squeezing his hand too hard or that he’s so tired or needs a break.

Zero sympathy, right? Come on guys! I’m sorry, who’s the one in excruciating pain for almost a full day (or more)? You just have to stand there and be supportive!

How hard is that?!

Well, after talking to my husband, apparently it’s a lot tougher than I thought. Now, thankfully, he understands that there’s nothing that he could ever say or do that would ever compare to labor. But he was very honest about his difficulties.

Let me introduce my husband, Asher. He’s my super-involved supporter of all things hippie and alternative. He loves punk rock music and making babies giggle. He’s also an unashamed baby hog who has a 3 : 3 record for holding our babies first when they’re born because “babies are so cute!”

One Dad’s Thoughts on Homebirth

Before having one of our own, what was your view on home births?

I was always very much pro-homebirth. I’ve never been a big fan of hospitals in general, and I’ve had a few friends and my family who had had homebirths and they seem to really like them. Plus, I figured that the recovery had to be better than it was for the c-section!

What did your peers say about home birth when you said you were having one?

They said, “oh your poor wife!Is it safe? No epidural?! No pain drugs!? What are you thinking?!? You guys are nuts!” I got very little support from anyone other than my family, who had all had home births themselves.

What intimidated you most about homebirth?

Having to watch my wife go through all that work and pain basically on her own, and me not be able to do anything about it. The only thing that I could do to help was to squeeze her hips together, but even then, that didn’t help because she was still in pain. I think as a guy, we like to fix things. So when she asked me to squeeze her hips together [for counter pressure during back labor], I just thought that it would make the pain stop. And when it didn’t, it took a while to find the mental strength to keep doing the same thing over and over again for 12 hours without it ever looking like it was helping.

What most excited you?

The unknown. We had never done anything like this before, and it was exciting to think about it. We were going directly against my wife’s old OBGYN’s orders to just keep having c-sections, so there was a part of me that was really happy doing our own thing.

When labor first started, what were you thinking?

Do everything that your wife tells you to do! If she needed me to get her some food, that’s what I did. but most of the time with her, it was “can you just squeeze my hips together?” But sometimes it was little requests like “hold me” or “hold my hand” that didn’t quite make sense to me, but seemed to make her smile a least.

Halfway through it, you realize that you’re basically worthless. We, men, are protective by nature. So emotional support is a lot tougher than I thought. I kept squeezing her hips together hoping that it would stop the pain for her. I knew I was in for a long day when it didn’t seem to help!

What’s your most memorable moment in the home birth?

When the baby comes out! When we’re all covered in amniotic fluid and my wife isn’t in pain anymore. It makes it all worth it when we get to bond with the baby in our own home. We still joke about our first meal after our first homebirth. I made my wife hashbrowns in bed. While making them, I almost broke my arm slipping on something in the kitchen. We would’ve been in a lot of trouble if that had happened! But I love that memory. Not the almost dying part, but just knowing that it was all over and that we were in our own bed and house eating our own food.

We still joke about our first meal after our first homebirth. I made my wife hashbrowns in bed. While making them, I almost broke my arm slipping on something in the kitchen. We would’ve been in a lot of trouble if that had happened! But I love that memory. Not the almost dying part, but just knowing that it was all over and that we were in our own bed and house eating our own food.

Do you think that you are adequately prepared for the home births?

Physically, yes. Mentally, no. You can do all the physical prep you can, and you should! You never know if your wife is going to have back labor and you’ll need to squeeze her hips together with all of your strength for 12 or more hours!

But nothing will prepare you mentally for it. You can read all of the birth books and go to the birthing classes, but when it comes time for labor, you never know what you’re in for.

Any advice to other home birthing dads?

(Pauses for a long time.) It’s good all around. It brings you closer to your wife and to your new baby. But there’s no control. There’s no structure.

It’s like improv; you can plan all you want but you can’t really fully prepare. But when it all comes together, it’s worth it.

The c-section was so stressful, and I know that she still carried a lot of scars physically and mentally from it. And then there’s the homebirths: where there was never any pressure or anxiety or fear. That doesn’t mean it wasn’t hard!

Birth takes a toll on dads, too! It might sound bad to say that you’re probably going to be bored out of your skull, but it’s true. A lot about birth for dads is just sitting and waiting. And for a guy who likes to do things and to fix problems, it was tough.

But, again, in the end, it was all worth it to have such a great birth in our own home and on our own terms.

If we have any more children, I want them to be homebirths, too. But maybe next time, we’ll hire a doula to help with the counterpressure! What did your husband think about your homebirth?