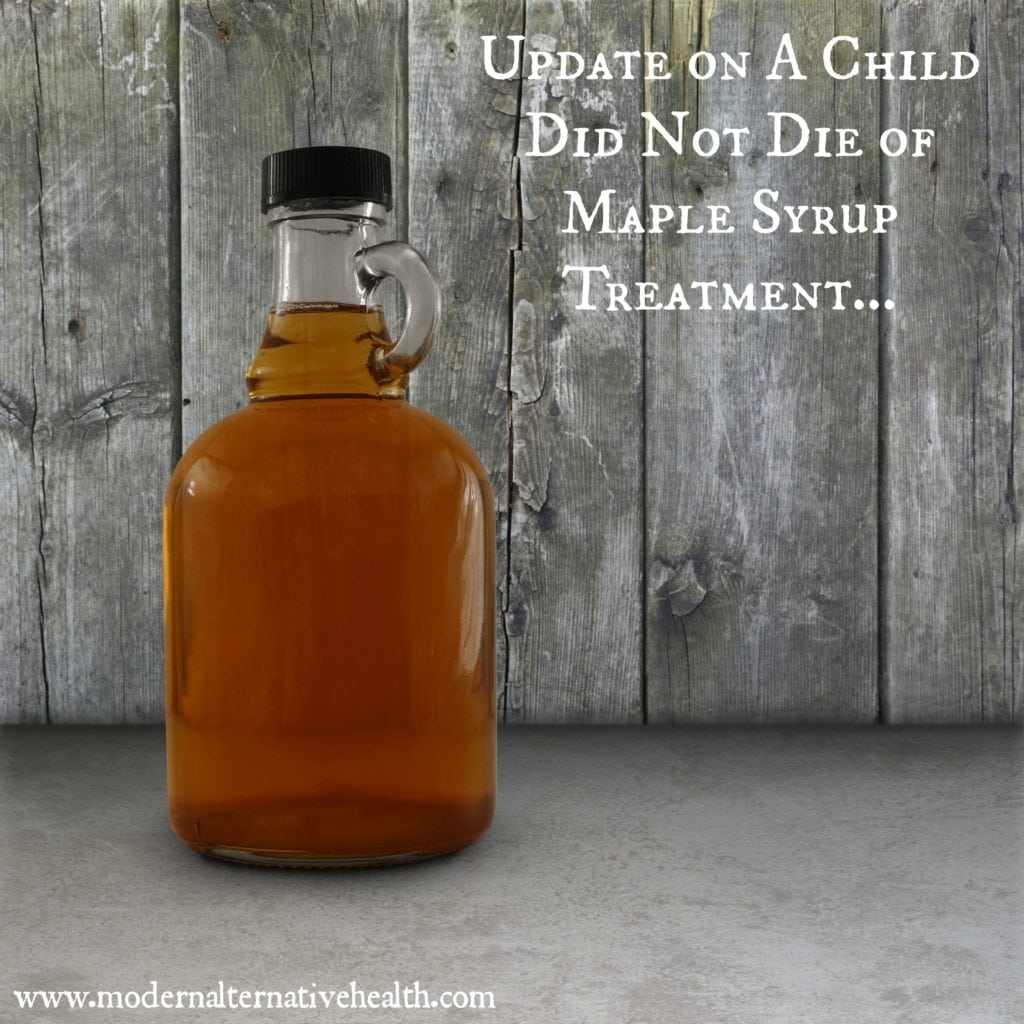 Update on A Child Did Not Die of Maple Syrup Treatment… This has been one of my most controversial posts to date: No, a Toddler Did Not Die of Meningitis After Treatment with Maple Syrup.  The media’s twist on the story enraged me, and I could not leave it alone.

Of course, my version of the story enraged all kinds of people, too, who insisted that I’m pro-killing toddlers, that the parents obviously are idiots who knew their son was sick and that they deserve to have all their children taken away and be sentenced to prison — or death.  I haven’t bothered to publish most of those comments, and I won’t, because they’re ridiculous, and they’re wrong.

I’ve been following the trial quite closely, and there is now proof that the parents did not allow their child to die, and neither did he die of bacterial pneumonia at all!  We’ll get to that in a minute….

Update on A Child Did Not Die of Maple Syrup Treatment…

You might be asking why I even care.  I don’t know them, personally.

I care because I know how the media works.  They get a hold of a story, and they take a few key details that are true or assumed to be true, and they fabricate a long, involved tale surrounding it that is mostly false.

People read the fabricated tale and assume they’re then informed about the story.  They pass harsh, immediate judgment on the people involved in the story.  They resist any attempts that people make to explain to them they may not have all the facts.  They get nasty about it.

That’s exactly what was happening here.  The story came out in pieces, with very little explanation, and people picked up on key details, like “the child was stiff in his car seat” or “gave him herbal supplements” and decided that they knew what the situation was, what the parents had been through, and that they would do differently.

This hasn’t only happened to them, but also to plenty of others.  Peoples’ stories are put up for public consumption in a totally twisted manner, and the public makes their snap, harsh judgments.  While at the same time, hoping that if they were ever put up, they’d receive understanding and grace.

Newsflash, you wouldn’t.  I’ve been judged publicly for stories that were false or mostly false before.  I can’t stand to see it happen to others.

This family doesn’t need this right now, on top of everything else they’re facing.  They are loving parents, who did everything that loving, attentive parents would and should do, and they tragically lost their son.  And, it wasn’t even their fault! What the Evidence Shows

As I mentioned, I’ve been closely following the court case.  They’ve posted daily updates on a blog that describe the evidence that has been presented.  This is a much better source for real information than the media’s random bits.

Anyway, it’s pretty conclusively proven that they were not responsible for their son’s death.

“He was so stiff he couldn’t be put in his car seat” — this was misinterpreted.  The child was experiencing muscle soreness consistent with flu and was uncomfortable in the car seat on long rides.  Longer rides were necessary because they lived far from town.  He wasn’t “stiff” like meningitis (which only causes a stiff neck, not a stiff body!).  Their only ‘crime’ here was driving with him not in a car seat.

“He was treated with maple syrup and random fruit juice and stuff” — this was entirely a media fabrication.  The parents treated him with their supplement, EMPower Plus; olive leaf extract; echinacea.  That’s it.  The rest was just made up so that it would sound stupid.

“The nurse even said that he probably had meningitis and told them to go see a real doctor” — nope.  The nurse friend mentioned she’d seen a case of viral meningitis in the ER a couple weeks prior and wondered if it could be that.  They looked up his symptoms together, and concluded that, because of (at the time) a lack of fever, headache, and other key symptoms, he likely did not have it.  She did not tell them to go see a doctor, unless his symptoms worsened.

“He was sick for two weeks straight and his parents never took him in” — nope.  He had croup, then recovered, then developed something else (something flu-like) and seemed to recover…until the night he stopped breathing.

But the key evidence was delivered yesterday, April 19th.  An expert pathologist looked at Ezekial’s files and all of his test and autopsy results.  She proved, conclusively, that he did not have any signs of bacterial meningitis (he had signs of viral meningitis) and that intubation caused the lung infection/pneumonia, and that the cause of his brain death was the lack of oxygen in the ambulance for 8 1/2 minutes.  It was her professional opinion that if he’d been properly intubated at the right time, he would still be alive today.

It was the medical system’s failing that caused this child’s death.  Not the parents.

The trial isn’t over yet, but I fully expect that these parents will be found Not Guilty, as they should be.

One person says something to someone else, who repeats it “almost” correctly, who repeats it not quite right to another person…and so on, until the original message is completely wrong.

This story has been shared and re-shared to try to harm this family and make alternative medicine look stupid.  It’s not at all reality.  And, in fact, if the parents had been treating him at home with Tylenol instead of olive leaf extract and the same outcome occurred, they would be comforted by the community and not on trial.  Doesn’t that strike anyone else as so very, very wrong?

I won’t publish any negative comments on this story, especially from people who want to “debunk” it with CBC articles.  Read the trial blog.  Read the actual evidence.  Have some compassion for these grieving parents.  They deserve it, after having to cope with the death of their son, the investigation, the trial, and the media’s all-too-effective smear campaign.

Next time a story like this makes the media, stop and ask: do we know everything?  Should we be judging based on what little we know?  Chances are, the answer’s no.  Grace and understanding over judgment — always.

How do you feel about this story?