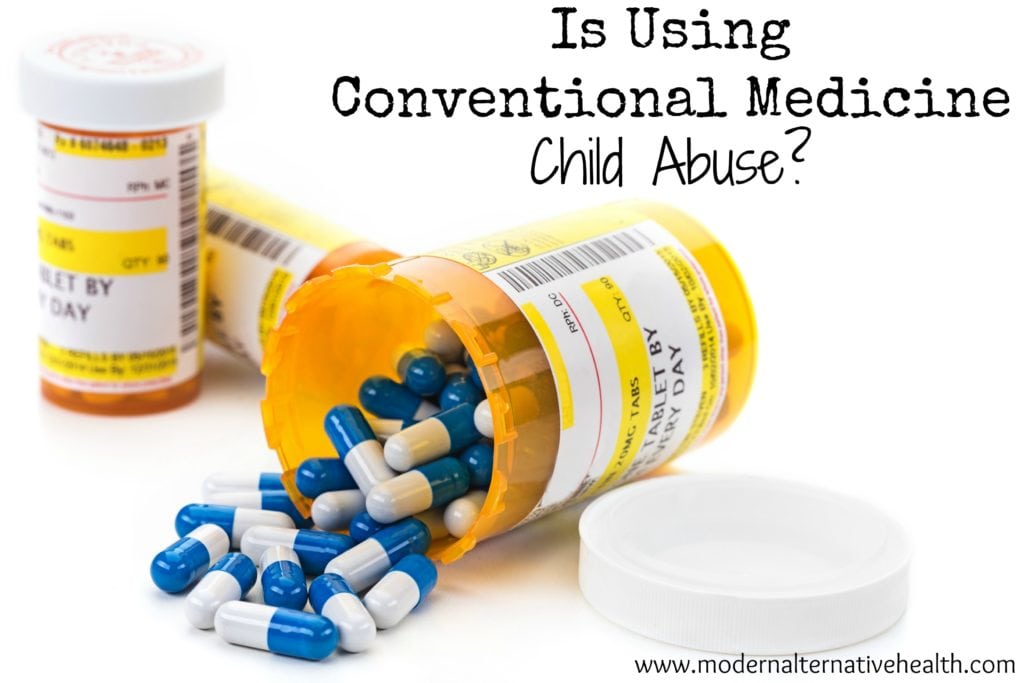 I’m actually not a fan of people calling everything they don’t like, disagree with, or wouldn’t choose “child abuse.”  I think it’s an insult to actual child abuse, like starving, beating, or molesting children.  (There are other ways to abuse children too…but treating a cold with ginger instead of Triaminic isn’t one of them.)

However, there are people who legitimately believe that choosing alternative medicine for children is actually child abuse.  They cite a tiny handful of cases where a child died or was permanently damaged because their parents chose to use alternative remedies.  Like the Stephans’ case right now, which is at trial in Canada.  I’ve been following that closely, and no, they didn’t kill their son, nor “fail to provide the necessities of life.”  Citing silly CBC articles (the company that owns CBC is the one prosecuting them, by the way, so not exactly unbiased) is not going to change that.

Anyway, this isn’t about that.

In a broad sense, alternative medicine isn’t child abuse.  Ever.  Even if a child dies.  (Yes, I really just said that.)  To understand this, we need to take several steps back.

What is Child Abuse?

What is child abuse, anyway?

These days, people try to define anything they don’t like as child abuse.  They try to define any time a child gets hurt or sick as child abuse.  Kid fell out of a tree he was climbing and broke his leg?  Child abuse, you shouldn’t have let him climb that tree!  Kid ran out of the house and into the road naked, with parent chasing behind?  Child abuse, you should have been watching more closely so they couldn’t have gotten out in the first place!

It’s not really a good definition to look what what society considers “abuse” these days, because most of it is pure junk.

Instead, let’s say that abuse is:

Okay.  So.  Causing direct harm to your children is abuse.  Failing to feed them at all is abuse.  I think we’d all agree on that.

Is it abuse if you get into a car accident and your child dies?  No.  That is an accident.

Is it abuse if your child sneaks out the door and drowns in a pool?  No.  That is an accident.

Is it abuse if your child becomes ill, and dies, despite attempts at treatment (conventional or alternative)?  No.  That is a tragedy.

Parents who mean well and who are doing their best to care for their children are not abusing them…regardless of the outcome of the situation.  Accidents do happen.  Things don’t always turn out well.  If we start to define “abuse” as “when the outcome is bad,” then we’re going to have a serious problem.

Some are going to say right now, “But if a parent uses alternative medicine and the child dies, that is child abuse!  They should have used conventional medicine when they knew it was serious!”

I’m going to have to disagree on that. To answer this question, we need to know what we’re looking at.

Second, we’ll look at what the worst case outcomes are, and how common these actually are.

Right now, antibiotic use is high — and problematic.  One study found that about half of all prescriptions (around 11 million per year) are unnnecessary.  On average, people have about 1 antibiotic per year.  (But we don’t know how many have none and how many have several, it will vary.)

(Common) Side effects of antibiotic use include:

Other side effects include:

Yeast infections and pathogenic bacterial infections (like C. diff) are common after antibiotic use, because antibiotics wipe out all the good gut flora along with the bad stuff.  This can and does lead to repeated courses of antibiotics.  The more courses you have, the more likely that C. diff and other serious effects become.

This might all be worth it, if we were facing serious, life-threatening illnesses, or illnesses that could not be treated in other ways.

And UTIs?  They might need antibiotics, but one study found that in recurrent UTIs, probiotics along with antibiotics reduced the risk of additional infections.

Using antibiotics in a child’s first six months of life can lead to increased risk of allergies, asthma, and eczema.  I don’t need to tell you that these are generally permanent conditions, not acute like ear infections.  That’s a big deal.

None of this even addresses all the prescriptions that doctors write because patients ask for them, without a proper diagnosis.  When patients come in and ask for a specific drug, doctors are between twice as likely and twenty times as likely to write a prescription for it!  Another study shows that about 100 million antibiotic prescriptions are written annually (half of which are unnecessary and prescribed for viral infections on patient request), which leads to almost 150,000 emergency room visits due to medication issues.

One doctor says, “Everyone feels awful when they are sick and just wants to feel better,” Julien said. “For some reason, faith in the body’s natural ability to heal itself has waned, and everyone believes that an antibiotic is the only possible cure that could help.”

I wonder why that could be, hmm?

To sum it up, we’re writing prescriptions we don’t need, for conditions that typically clear up with no treatment or supportive care, that cause serious side effects, and tens of thousands of allergic and other reactions per year.

…and you’re telling me that, which is clearly causing harm to children, is not child abuse?  Or worse, that actually following the evidence and choosing no treatment or supportive care — the obviously better choice, from a scientific standpoint — is child abuse?

In contrast, alternative medicine has no such issues.

Ginger has been proven to help treat and prevent colds and other respiratory infections, and has no side effects.  Of course, ginger is also known to be excellent for its role in treating digestive disorders (nausea, bloating, diarrhea, etc.) and also has cancer protective and cancer-fighting properties.

Mullein is effective against respiratory infections, worms, and more!  No side effects and no known toxicity.

Honey is effective against coughs.

Cinnamon essential oil is a natural antibiotic — and even works against resistant bacteria (more evidence on cinnamon).

Lemon essential oil is a natural antibiotic, and is synergistic with cinnamon.

Colloidal silver is effective as a broad spectrum antibiotic.  Silver even worked in one study to kill breast cancer tumors!

But, it’s pretty clear here.  These natural remedies work.  And they don’t cause side effects.  They reduce the likelihood of opportunistic infections, because they’re effective against resistant bacteria.  They don’t increase the risk of asthma or allergies or any other issues.  In fact, ginger may be used to help control asthma.

When I search for “death by herbs,” the first thing that pops up is a study of how herbs cause cancer cells to die.

Deaths or any kind of serious issue from herbal remedies are nearly unheard of.  That’s an incredibly safe track record!  Herbal remedies work, and they don’t harm people.

This is a lot tougher to look at, for many reasons.  Many die despite treatment when something is really serious.  Many turn to conventional remedies even if they otherwise wouldn’t when it’s serious.

Regardless of what people choose to do, when it’s serious — there’s a real risk of (further) complications.

Why is it if a mom uses Tylenol constantly and takes him to the doctor and he dies of meningitis, she’s told there’s nothing more she could have done and it’s too bad her baby died…but if she chooses an alternative path instead of or before going to the doctor, she “allowed” him to die?!

It’s because most people think that natural remedies are basically like “doing nothing.”

So let’s get it straight right now: if you think that, you don’t understand natural remedies.  Which is okay — stick around, and learn a few things!  Unless, of course, you’re using your poor understanding of how natural remedies work to judge other people and say they are bad parents.  Then, no, it’s not okay at all.

Worst case scenarios are just that…worst cases.  We just don’t know what will happen and there are no guarantees.

So Which is Really “Abuse?”

Neither is actually abuse, and people need to quit saying things they don’t like or don’t understand are abuse.  Seriously, grow up.

Looking at the data, though, it’s clear that as far as safety and efficacy, natural remedies win most of the time.  I’ll continue to use those, and continue to have healthy children.

If you’d like to learn more about natural remedies, please see my book, Natural Remedies for Kids.

Do you think conventional medicine is child abuse?