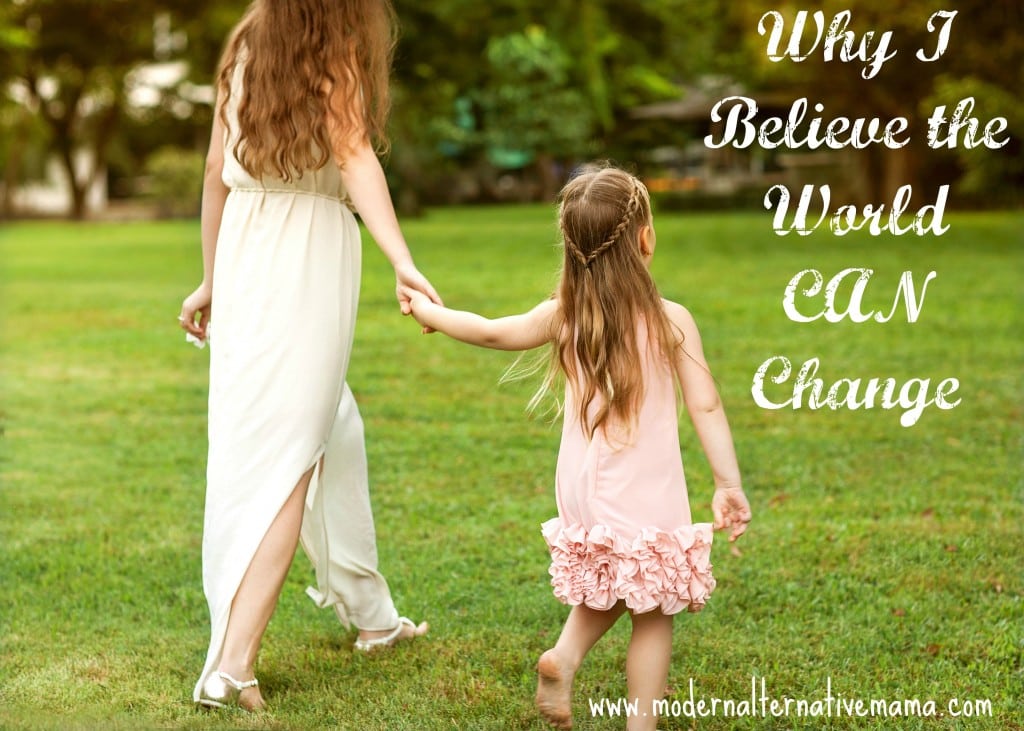 Why I Believe the World CAN Change

I’ve had many, many conversations with people about various issues that I advocate for.  Everyone in my life knows I’m an advocate of gentle parenting, natural remedies, breastfeeding, unschooling, and so on.  Not everyone in my life does some, or even any, of these things.  I don’t spend my time preaching at them, but occasionally, these topics do come up.

Inevitably, I hear one of the following statements:

“What works for one doesn’t work for everyone; to each his own; there’s no one size fits all”

“Well, but most people will just never do that, so they need this mainstream option.”

To the first point, of course.  One of the biggest things I advocate for is for people to have all the information, and the ability to make a choice.  We all think differently, we all need different things.  If I’m advocating for something, in particular, it’s not because I think it’s the only way; it’s because I think it’s a great way that a lot of people don’t know about or misunderstand.  My goal in those conversations is to clear up misunderstandings and ask people to consider.  That’s all.

The second point is the reason for this post.

Why I Believe the World CAN Change

That second point is almost always said when I offer an option that feels really radical to the mainstream.  Something like never using OTC medications at all or unschooling.

“Most people will never do that.”

That’s probably true, but it’s a total cop-out.  People don’t say it like, “Oh well, I wish more people knew, but most people never will.”  Like they know the information isn’t being shared and people aren’t being supported and they wish it could change.

No, they say it like this, “That’s just beyond the capabilities of the average person, so you’re privileged to even say that.  Remember what normal people are like.”  That is, that they think other people, even with some information, simply won’t change, and that I am the one who is the problem for having unrealistic ideas.

I know that some of these things are a big deal, and in some cases, a major change from the “way it’s done.”  I know that.  And I absolutely believe that people need adequate information, answers to their questions, and support in order to try some new things.  But I don’t believe for a minute that I should stop sharing or stop trying just because what I do and advocate for is unusual.

It’s not like the stuff I do is really all that hard, or weird, or expensive.  It’s actually not.  It’s just different than what people are used to.  But people can change.

Why Food is Changing

Ten years ago, everyone still believed processed food could be healthy (not that all of it was) and that fat was bad for you.  Most didn’t know anything about natural/organic, and that stuff was pretty much only in health food stores.  Most people believed that ‘healthy’ food tasted like garbage and wasn’t worth the premium price.

Now, there’s an exploding natural and organic market.  Mainstream grocery stores carry tons of options.  Mainstream brands are voluntarily making natural/organic product lines, removing preservatives and dyes from their regular lines, and voluntarily labeling GMOs.  Aldi, one of the least expensive places, has banned several food additives in its store-brand items (which accounts for 95% of what they offer) and has hugely expanded their natural and organic options.

People may need time to change their habits, from buying low-fat milk to buying whole milk (why you should).  Or learning to cook some simple things from scratch instead of heating up pre-made items.  (How I can help.)

It takes time to change, but I believe you can.

I did!  I grew up eating canned soups and Hamburger Helper and believing that “health food” was iceberg lettuce with bottled, soy-laden dressing on top.  I don’t eat like that anymore.

I’m happy to help…we’re offering weekly menus with complete grocery lists, emailed directly to you; a Facebook support group; and more.  It’s just $2.99 a month and the current participants tell me the recipes are super easy!  One even said she didn’t shop specifically for the plan, yet had everything she needed in her pantry anyway.  (Learn more here.)

Why Medicine is Changing

Growing up, it was antibiotics at the first sign of any infection.  Tylenol for any and every hint of pain.  Every house had a medicine cabinet that was filled with brightly-colored cold and cough syrups, allergy medicine, stool-softeners, stool-hardeners, and so on. Most houses still do.

Most people are starting to realize that taking drugs for every little thing is maybe not the best plan.  More people are saving medicines for when they are truly needed.  More people are concerned about antibiotic resistance.  More and more people are interested in more natural alternatives, especially for simple stuff like colds and headaches.

Lots of people still have their back-up/emergency OTC options.  I personally believe they have these because they haven’t found a natural alternative that really works for them yet, and if they could find one, they wouldn’t need the stash anymore.

Of course, it’s not always that simple.  A remedy that works for one, may not work for another.  It takes some trial and error.  Some people don’t or can’t wait to see if something will work, because they have to be functional to go to work or take care of kids (or both).

Even so, more people are becoming aware that side effects aren’t always harmless, and that maybe those alternatives are really worth exploring.  I offer several ideas in my book, Natural Remedies for Kids.

Why Education is Changing

Lots of people aren’t ready to make the leap to homeschool — and definitely not to unschool — but more people are frustrated with the public schools.  There’s more and more standardized testing, and “teaching to the test.”  There’s less creativity, less of the arts, and less of anything good.  Class sizes are larger.

Most people acknowledge that this is not the best way to educate children, especially in the early years.

And, a lot of people are starting to supplements their kids’ education with activities, classes, and more at home in the evenings, weekends, and during the summer.

If we push back against so much testing, and if we ask for more freedom and creativity in the classroom, it will come.  It will take a lot longer to change the system than pull kids out of the system, but pulling kids out isn’t an option for everyone.

The World is Changing…and I’m Here to Help

When I’m sharing all of this with you, I’m not doing it to berate you and tell you that you aren’t good enough or aren’t doing enough.  I’m not doing to judge your path.

No, I’m doing it because I know there was a time that I didn’t know.  A time when I was searching for answers and ideas and had no idea where to begin.  I relied on people who were willing to give me information and answer what, to them, might have seemed like stupid questions.  Who put up with me when, in my mostly uneducated state, I thought I knew what I was talking about and offered opinions on why they were wrong.

But I got through that.  I kept reading.  I kept learning.  I eventually figured out a whole lot of stuff was actually right all along.  (But not everything, because, you know, nobody’s right about everything and not everything works for everyone.  I still don’t believe gluten is killing us all, although it’s clearly bad for some.)

Anyway, I know how frustrating it is to be in that place, to have to sort through so much information and make sense of it all.  And it’s worse now.  When I was first looking for information, there were only a handful of websites talking about it, and some Yahoo groups, and that’s about it.  That was 2007 – mid-2009.

I want to help you.  I want to answer your questions.  I want to point you towards the information you need to make your own decisions.

Let me help you.  And if you’re someone I know in real life, if I offer an idea, I’m willing to help you in a hands-on way.  Not sure where to start with making your own lotions, potions, or anything else?  Tell me, and I will invite you over and show you.  I am more than happy to show you anything I know.  I have often brought herbs and remedies I made to friends in need also.  You only have to ask.

We can change the world.  We just need to keep learning, and helping others, and it will make a big difference.  Really.

The world will be different, once people have the knowledge, support, and confidence they need to try another way.  We’re watching our modern choices cause all kinds of problems, and we can break away from all of that.  I know we can.

Do you believe the world can change?