25 Creative Ways to Get Physical Contact with Energetic Children |
AD 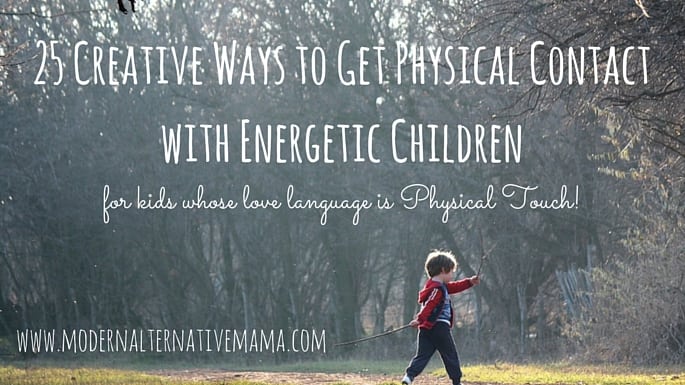 25 Creative Ways to Get Physical Contact with Energetic Children

Is your child’s love language physical touch but they are always on the go? Here are some ways to get physical contact with energetic children.

He’d rather run laps around the garden than sit in my lap. He’d rather jump on the trampoline than jump into my arms. He’d rather kiss his basketball than kiss his mama.

And you know what, that’s ok.

It’s ok because he’s a growing-way-too-fast boy who has energy and life and curiosity and I love all of these things about him.

But…I know something he doesn’t.

I know that my sweet Man Cub is a cuddler. I know that for more days and weeks than I can count, the only place that boy would sleep was on my chest, snuggled right into me.

I know that even though he doesn’t have time to stop, even for a moment, that the days he is the most himself and the least hyper-emotional are the days when he’s sat on my lap or cuddled with me in bed.

So instead of daily trying to give him the hugs and kisses he so badly needs against his will, I try to sneak in physical contact with my son in other ways. His love tank is full, and I know I’m impacting his day with a dash of intentionality.

Want to know my secret ways to fill up my son’s love tank? My creative ways to get physical contact with him?

Ok, maybe none of these are a secret but they are clever, and definitely appeal to his all-boy-ness that I really love. Ready?

25 Creative Ways to Get Physical Contact with Energetic Children

We hold hands for crossing streets and parking lots. Since he isn’t just going to hold my hand on a walk (as that puts a damper on his exploring) I make sure in our parking lot, he’s right next to me.

Play with His Hair

When he’s sitting to watch his sister do school, eating lunch, or any other time that his movement slows down, I run my fingers through his hair. He loves it. And I know it means love to him somehow because he likes to run his fingers through my hair, too.

Rubbing his back can be simple or involved, but mostly I just graze my fingertips over his back when he’s talking to me or asking a question.

I know what you’re thinking and the answer is yes, this one hurts a little. But we actually teach our kids to give head butts to extended family instead of giving everyone kisses. Since they are so young when we teach this one, we do it pretty gently. Plus, nothing says ‘I love you’ like a good headbutt.

There is absolutely nothing more thrilling for my son than conquering his latest quest then high-fiving me for it.

We like to double these up and do two fists. And we even do a little song. “Rock it, pop it, bring it back, and lock it.”

My little man is a ball of energy, that is until he’s just not. When he gets worn out, or just wants to see better, I give him a piggyback ride.

Boy moms will know that wrestling is a big part of raising boys to be men. I love it because he is always such a full little boy after wrestling, even if it’s just for a few minutes.

My boy is SOLID but that doesn’t mean I can’t pick him up and carry him for a little bit. For some reason my son loves being carried in the kitchen, which is a pretty small room, so he can check everything out, get some love from mama, and get put back down. Even my chiropractor is happy.

Put You Arm Around Him

I like to sneak this one in while we’re reading. Actually, he’s gotten to the point that it’s only REALLY reading time if he’s burrowed his head into my armpit. Fair enough.

My guy loves to help with anything and everything. But at 3 he still needs some help. So if we’re pulling weeds out in the garden, I help him get the right grip by touching his hand. In the kitchen, he pulls up a chair to be next to me. Or I guide him with his scissors.

My kids love to dance. Whenever a beat drops, these kids are grooving. I dance with them, hold their hands, offer fingers for twirling.

Just a little bit of tickles help get him laughing and help fill him up.

Sit On Your Lap

Obviously, if I could get him to sit still, this one would be the easiest. Surprisingly it isn’t that simple.

I know I said this one already but hear me out. For whatever reason, my kids get a huge kick out of being carried like a baby. So when they get out of the bath, I roll them up in a towel like a burrito and carry them through the house like a baby.

Ride On Your Shoulders

The ultimate way to explore the world around him is by being instantly 5 feet taller.

Same as rubbing his back. Only scratching.

Lay on the floor and have him put his tummy on the bottom of your feet, then lift him into the air. My kids experience “turbulence” and a “crash landing” about 10 seconds later.

We aren’t *quite* here yet, but based on our fist bump song, I’m guessing we aren’t far off.

Is this a game in other people’s houses because my kids LOVE it. Step 1 – tell parent you are going to tackle them. Step 2 – find a spot as far away as possible, like rooms away, that has a clear, albeit possibly not straight, path. Step 3 – run like the wind into the person you said you would tackle. Step 4 – repeat.

I don’t know what it is about me rolling out my yoga mat to do some stretching that is like the beacon of beckoning light to my children. “Come to me!” it calls which must translate to “climb on mom!” and they do.

Sit Side by Side

Physical contact doesn’t have to be fancy. Put on his favorite movie and sit next to him. This is shoulder-to-shoulder man time at its finest.

If the boy gets running, I get running too. Thank goodness he hasn’t hit his speed burst yet.= and I actually still have some chance of catching him.

Ok, so maybe I’m no mathematician but I know this equation balances out to full love tanks for the physical touch kiddos who are just too busy exploring to slow down and tell you what they need.

How Do You Fill Up Your Energetic Child’s Physical Touch Love Tank?

Leah Heffner
Leah Heffner the wife to a sexy, beard-sporting, man of God and mom to three cutie-pie-heads. She's a new southerner, a sometimes-DIYer, and a novice gardener. She loves coffee, a good Netflix binge, and encouraging other women. You can find her giving encouragement to fuel the journey of marriage, motherhood, faith, and friendship at Life Around the Coffee Cup
AD