Why You Shouldn’t Use Rewards Charts |
AD 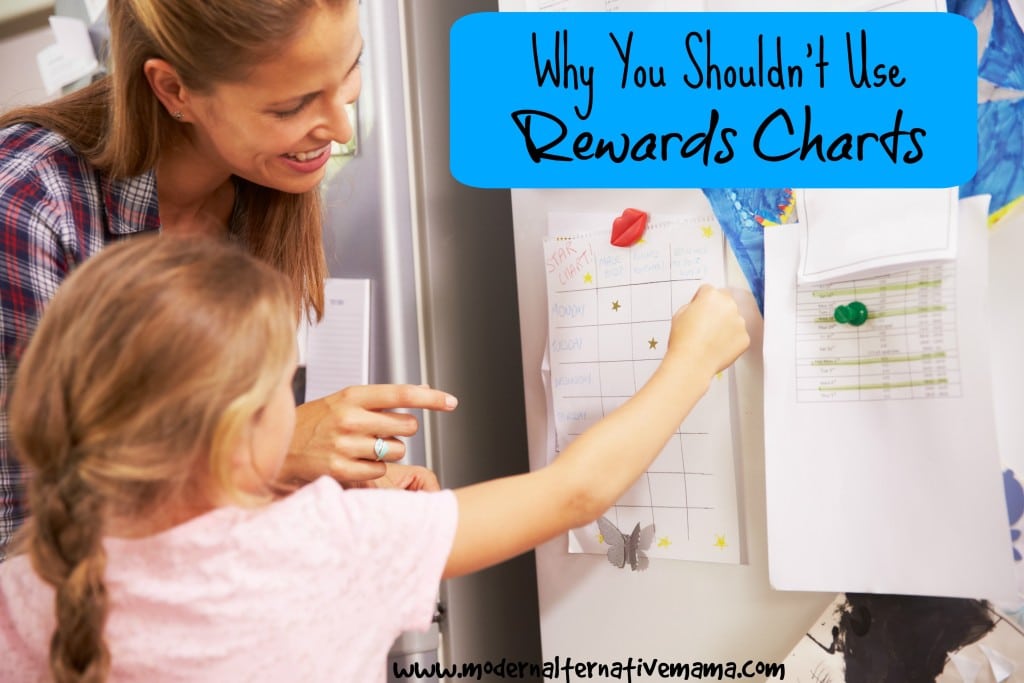 Why You Shouldn’t Use Rewards Charts

When my oldest was potty training, I faced a lot of different options and methods to choose from.  Plus, I got lots of advice from parents who had been there before.  One of the most popular methods is the use of a rewards chart — every time the child successfully goes (or, in some cases, attempts), they get some kind of reward, often candy.

This didn’t sit right with me.

I’d heard too many stories of kids who wouldn’t get off the potty, or who wanted to go every few minutes in order to earn more rewards.  Kids who would squeeze out three drops of pee just so they could say “I went; where’s my candy?”  Kids who regressed as soon as they were ‘trained’ and there were no more rewards for their behavior.  What was the point, if they had to stop playing to go to the bathroom (instead of just going in their pants without interrupting their game), and they weren’t even going to get the same treat they used to?

Therein lies the issue with rewards — they don’t really work, and can make things harder long-term!

Why You Shouldn’t Use Rewards Charts

I’ve felt weird about rewards charts for years, though — long before I ever had kids.  I used to teach private music lessons, from the time I was about 16.  Many teachers handed out practice charts for their students and required them to practice for 10 or 15 or 30 minutes per day, write it on their charts, and bring this to lessons.  If they successfully completed a certain amount of time per week, they would earn little rewards (stickers, pencils, candy, etc.).  It was the teachers’ way of motivating the students to practice.

I felt that this was gimmicky and stupid.  Students should want to practice for the intrinsic value of having musical skill, not because someone will give them a cookie if they do.  A student who was practicing because they really wanted to improve would be trying to specifically work on difficult passages, taking them slowly, paying careful attention to where their fingers were going and how their bows were moving.  They would actually improve because they were focusing on their specific skills.  A student who was practicing to put in time would simply play several songs or exercises with no attention to detail, and they would not improve.  What’s the point in that?

I motivated my students with the promise of new, exciting, more difficult music instead of stickers and candy.  That’s a real reward — gaining the ability to play more interesting music.

People use rewards charts to modify behavior.  To encourage someone to adopt a new skill, or to stop doing something that’s bad (i.e. “If you go a whole day without an accident, I will give you a sticker; a week of stickers means a new toy!”).

It’s supposed to be a ‘gentle’ option.  After all, punishment is harsh and mean, and rewards are fun and nice.  Right?  But honestly, they are two sides of the same coin!

Punishment and Rewards are Both Manipulation

Ultimately, whether you threaten someone with something bad, or promise them something good, you are trying to manipulate their behavior.

“If you don’t stop hitting your brother, I am going to make you go to your room for awhile.” <– punishment

“If you can go a whole day without hitting your brother, you can have ice cream after dinner.” <– reward

In both cases, the child, if successful in not hitting his/her brother, is doing so to avoid the punishment or obtain the reward, and not because hitting the brother is wrong and s/he is learning self-control.  And yes, it does matter long-term what the reason for the behavior change was!  Because if you don’t offer the same reward or punishment the next day, then the child has no more motivation not to hit his her/her brother, and will likely do it again.

(Although in this example, hitting is usually a sign of frustration, and occurs when a child is not feeling in control.  It’s not something they plan to do, or seek out, or do when perfectly calm.  They do it because they are overwhelmed.  Figuring out why they are hitting, teaching them an alternative response, and protecting the other child in the meantime are the best ways to stop the hitting for good.)

At any rate, any behavior change is due completely to the reward or punishment and not due to any learning or self-motivation or self-control.  This teaches the child to only perform to get rewards or avoid punishment and not to internalize right and wrong, or develop self-control or self-discipline.  As an adult, there will be only minimal punishment/rewards available (for example, being punished with a ticket for speeding), but most of the time, behavior must be self-regulated.

In order for kids to grow up, to learn new things, to understand and keep up with those things, they must have self-motivation.  Help encourage this with realistic “rewards,” the type that comes naturally.

“If you choose to use your potty, you’ll get to wear soft, comfortable, fun-looking real underwear.  You also won’t have to sit in wet, yucky diapers anymore — you’ll feel dry and nice all the time.”  Not having soiled pants is a natural benefit of using the toilet!

“If you learn to read, we’ll be able to read this book together.  Or you could even read it by yourself if you don’t want to wait for me anymore!” Some children love to be read to, but get impatient that their parents can’t sit and read all day — they want to know what happens next!  Knowing how to read allows them to take in the story at their own pace.  That’s a natural benefit!

Some might say, “Yes, but using the reward gets them to start, and then they will hopefully keep going with it as they see the benefits of it!”  Maybe.  But it might also delay their progress and make it more frustrating for both of you, because they’re trying to do something they aren’t developmentally ready for, or don’t yet see the need for, just to earn the reward.  Potty training, for example, can take weeks or months when parents use external rewards and punishments.  But it can take mere days — or even just a single day! — when they’re ready and decide on their own.

None of this is to say you shouldn’t ever do anything special or nice for your children.

If your child works really hard and completes an awesome project, it’s okay to say, “I’m really proud of you and I think you did a great job on that.  Let’s go out for ice cream.”  The difference is, he didn’t do the project to get the ice cream.  He did the project to learn something, and you’re expressing pride in his good choices and hard work, and celebrating together.

We do this as adults — we work hard and get a promotion at our jobs, and we go out to celebrate!  But we didn’t work for that promotion in order to get the celebration.

It’s a good idea to quietly recognize when your child has made good choices, and point those out, and praise them.  The other day, one of my children wanted something another had and tried to grab it out of said child’s hands.  I stepped in between them and would not allow this.  So, the first child said, “Hey, I’ll give you a ride in the wagon if you’ll give me that.”  The second child agreed readily, and everyone got what they wanted.

I said to the first child, “That’s a great way to solve your problem!  Thank you for being nice.”

We’re praising the intrinsic motivation.  We’re saying “thank you for doing the right thing.”  We’re recognizing that their hearts are in the right place.  They feel happy for the “above and beyond” response from you, it builds up your relationship — rather than trying to artificially motivate them to do something!

(And, let me just say, I know that sometimes there are not-so-great parenting days and you don’t care about the long-term consequences.  You just need to get through the day.  “I’ll give you a lollipop if you keep your hands to yourself for next hour” might just be worth it then.  I know it’s not going to change any long-term behavior and I’m not using it to try to teach them anything.  I just need them to hold it together for a short time, and if a bribe works, well….  It’s a part of motherhood.  This isn’t about being perfect!)

Bottom line — recognize when your kids do right because it’s right, but don’t promise them a reward in advance if they do right.  These things are very different!  Rewards don’t help them learn or grow as people and can even hinder the process.

How do you feel about rewards charts?