No, a Toddler Did Not Die of Meningitis After Treatment with Maple Syrup |
AD 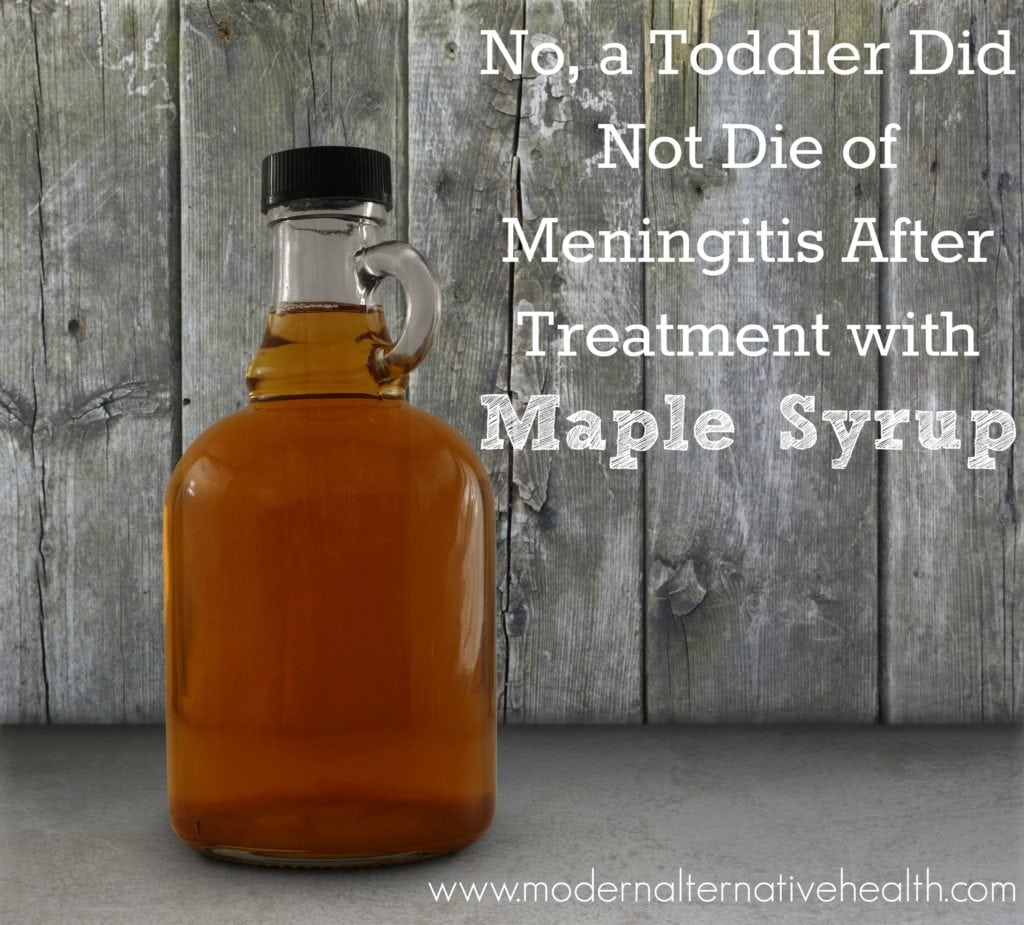 No, a Toddler Did Not Die of Meningitis After Treatment with Maple Syrup This story is making the rounds, and it needs to end.  Now.

A bunch of internet trolls are claiming that a toddler died of meningitis in Canada recently because the parents knew that he had meningitis, and decided to treat him at home with maple syrup and natural remedies instead of getting real medical help.  Of course, this means they should go to prison for medical neglect.

This isn’t even close to the real story.  But trolls don’t care.  Anything they can do to make someone look bad, and further destroy an already hurting family.  They’re terrible human beings for this.  They’re frankly the ones who should be locked up, for using one family’s tragedy to further a completely bull crap agenda.

No, a Toddler Did Not Die of Meningitis After Treatment with Maple Syrup

This is the real story.

About four years ago, a young boy — 18 months — got sick.  He had a slight cough and fever, that came and went for about a month.  Some days he seemed sick; some days he was playing and acting fairly normal.  The parents had a friend, who was a nurse, come in to check him over (they could not get into see a doctor because it’s hard to get appointments in some areas of Canada, due to socialized medicine, and this wasn’t an emergency).  The nurse said she didn’t see anything serious.

They knew to look for things like high fevers, stiff neck, screaming for meningitis, but the boy never had any of these symptoms.

Then, one night in March, he suddenly spiked a higher fever and was having trouble breathing.  They immediately called emergency services.  They lived fairly far out in the country, so they decided to drive towards town and have the ambulance meet them.

Unfortunately, the ambulance that was dispatched was not the closest one, so it took longer to meet them than it should have.  When it did arrive, it wasn’t equipped with the correct intubation equipment — which the child needed to save his life.  He was taken to the hospital and placed on life support, but after five days was declared brain-dead.

So, this family did what any normal family would do.  Their kid seemed to be a little sick, but had no serious symptoms.  The most concerning thing was that he seemed to keep relapsing, and not recovering fully.  That’s something to call the doctor about (which they did), but it’s not an emergency.

Until it was an emergency — unpredictably.  At that point, they did call for help.  Just like any normal parent would.

It’s easy to say, in hindsight, “He clearly was really sick, there were red flags, why didn’t they take him in sooner?”  But there really weren’t.  We only see red flags because we know the unfortunate outcome.

Finally, we don’t know that the boy actually died of meningitis.  There was bacteria in his system that could have been meningitis on the autopsy, but he showed no classic signs of it.  It’s just being assumed that that’s what it was. Charged By the Government

Now, the government has indicted them for ‘failing to provide the basic necessities of life’ and they are facing a trial (which began on Feb. 29) and possible jail time, as well as the removal of their other children.  The government is alleging that they knew that the child was seriously ill, and refused to get him medical care.  This is completely wrong.

The family reached out to the media and asked for help.  They need it, now more than ever.  They’re facing a very serious threat to their family, massive legal bills, and the potential loss of their children.

So of course, trolls had to jump all over this, twist it, and try to make it into something it’s not.

We have people, now, who believe that the family really did know their child was seriously sick, that they treated him with random natural remedies, that they refused medical care.  People who prefer natural remedies, who don’t vaccinate, who would support this family if they knew the truth, are now re-posting the trolls’ words and saying things like “I prefer alternatives, but I’m not stupid like them — I know medicine has its place!”  So did they.

They want people to believe: vaccinate without question, and don’t use natural remedies, or you’ll face prosecution.

If this case is ruled against the parents, and they end up in jail, it sets a dangerous precedent.

There is currently no law on the books that you have to vaccinate in Canada.  This would erase need for the law.  Basically, if your child developed a ‘vaccine preventable’ disease, or worse, died from one, you could be held criminally responsible for it.  Parents would vaccinate just to try to prevent these lawsuits (which is a terrible reason to make a medical decision).

And, the medical system in Canada, which is already quite busy, would be slammed by parents bringing their children in for every little sniffle.  That is how this boy started out…and unfortunately, he died.  Most children with a little sniffle have a cold, and will be better in a few days.  But if parents think their child could have something serious, and that they will be prosecuted if it is serious, they will not take a chance to ‘wait and see.’  They will not allow the government to think they didn’t do everything they could to provide medical care.  They will need it documented that they had early and frequent contact with medical professionals.  So, they will take their children to the doctor for anything and everything to cover their backs.

Is this what we want?

Do we want to rip apart a family that has already faced an unspeakable, unfortunate, unpredictable tragedy?  Do we want to charge parents who couldn’t have known what the outcome would be?  Do we want to force parents to vaccinate or face lawsuits?  Do we want to overburden an already-busy medical system with cases of the sniffles — so that people with real needs end up slipping through the cracks?

I don’t think so.

Please support this family, and speak out against this smear campaign.  They need your help right now.

How do you feel about this horrifying story?