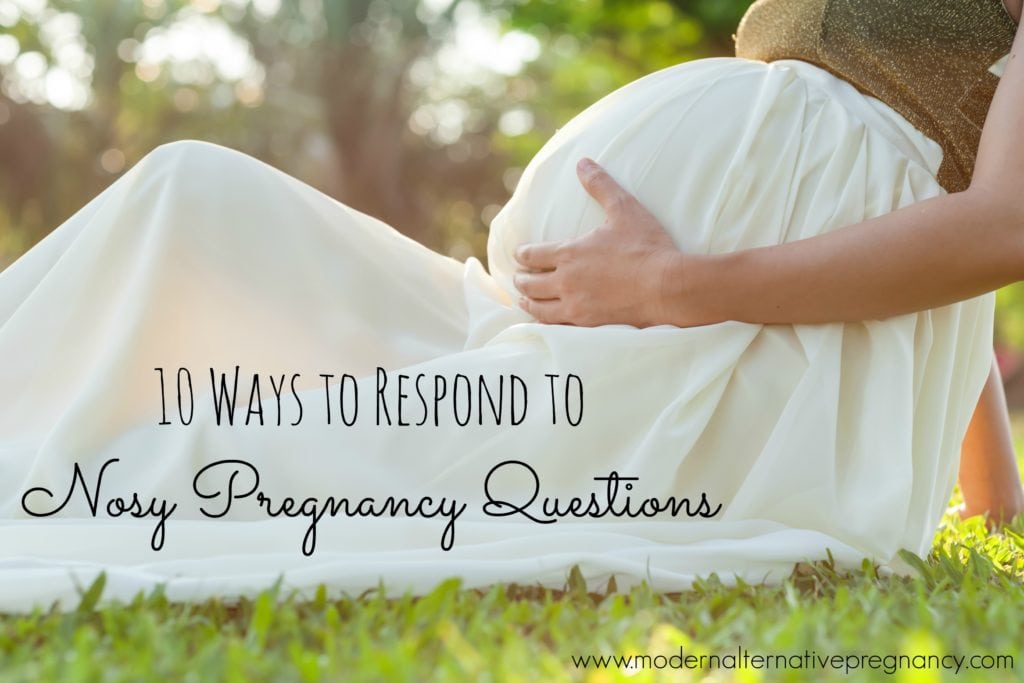 When you’re pregnant, people seem to think it’s an open invitation to offer advice…or make comments.  From “Can I touch your belly?” to “Get the epidural; you know they don’t give out medals in the delivery room” to “So my birth was horrible, let me tell you the story…” there is no shortage of nosy pregnancy questions.

It can get tiresome.  Most people mean well, but when you’ve heard it a dozen times before, sometimes you are just ready to scream!

Instead of screaming, try one of these witty responses!

…in response to, “Do you know the sex of the baby?”

Whether you do or don’t, you may not be ready to share that with the world.  And, many parents aren’t finding out these days.  Just tell them you’re pretty confident it’ll be either a boy or a girl.

2. “I wasn’t sure what to do about that, so I’ve been asking for opinions from strangers all morning.  Thanks for weighing in.”

…in response to basically any situation where a stranger tells you what you should do in pregnancy (get this test, avoid that food, etc.)

It’s snarky, and even bordering on rude, but sometimes you’re not in the mood!  Offering unsolicited advice kind of runs you the risk of snark!

3. “I’m sorry it was so terrible for you, but I plan for everything to go perfectly for me.”

…in response to the people who want to tell you their horror story of the delivery room and warn you yours might be the same.

In reality, no one can ever plan everything exactly.  Birth is no different.  But most people, when making their birth plans, understand that and mean “…if everything goes well.”  They don’t mean that they’ll fight tooth and nail for their own experience if something’s going wrong!  And, delivery horror stories?  Please just don’t, especially with first-time moms, who don’t need any help with their imaginations running wild.

…in response to anyone who questions a home birth/birthing center/natural birth plan.

People who don’t understand natural birthing might honestly believe that everyone involved is completely uneducated about birth and that there isn’t a plan for an emergency.  If you’re talking to someone who isn’t legitimately curious and doesn’t want to learn, just say something like this.  It’ll be more fun.

5. “Who’s delivering the baby?  We can’t decide between me and the pizza guy.  I guess the pizza guy has a slight edge.”

…in response to people who ask who is delivering the baby if you announce you are having alternative care or unassisted.

Everyone in our culture is so obsessed with what professional will “deliver” you.  For the most part, unless an emergency exists, mamas do all the hard work themselves!  Birth professionals need only sit back and watch, until or unless something goes wrong (which it usually doesn’t).  For people who are not interested in learning more about why women are in control of their own bodies, try this response!

6. “They don’t give out medals in the delivery room?  But that’s the only reason I was going for a drug-free birth!”

…in response to people who say ‘they don’t give out medals in the delivery room, take the drugs.’

It’s just a ridiculous thing to say to a pregnant woman, so it deserves an equally ridiculous response.

7. “I’ll be sure to tell my doctor you said so and/or ask him/her about that.”

…in response to any unsolicited advice.

This doesn’t even have to be snarky.  Many people will simply back off if “my doctor” is invoked.  It’s a good way to end a conversation and move on.

…in response to people who ask to touch your belly (particularly strangers).

It’s kind of weird that we wouldn’t think to touch, or even ask to touch, a stranger’s body in general…but somehow pregnant bellies are different.  (Well, they’re not.)  This response just highlights how ridiculous it is to ask this of someone you don’t know.

9. “I don’t think she has any qualifications…or at least, I didn’t ask.  Does it matter?”

…in response to someone who asks what your midwife’s qualifications to care for you/your baby are.

10. “That’s really between me and my husband/partner/care provider and it’s not up for discussion.”

…in response to just about anything.

Bottom line, you’re in control of your body.  You get to make your own decisions.  Other people can either respect that, or…really nothing.  There is no other option!  It is your choice. Period.

How do you respond to nosy pregnancy questions?