Why I Hate Most Kids’ Shows |
AD 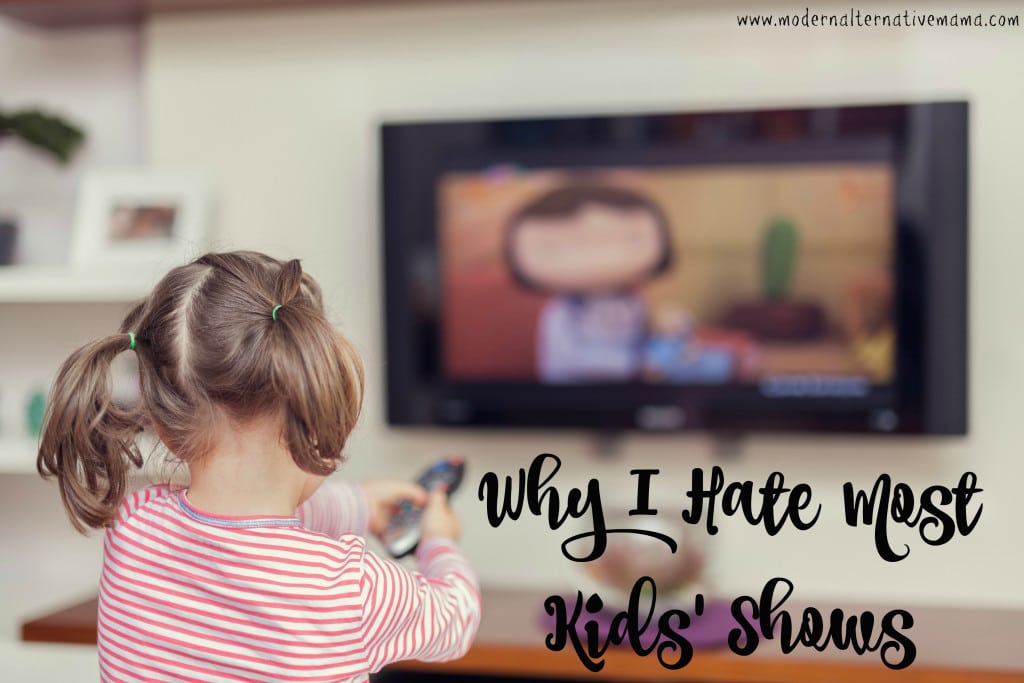 Why I Hate Most Kids’ Shows

It was a Sunday afternoon, and my kids were watching Caillou.  Many parents particularly dislike that show (and me among them), because Caillou is a whiny character.  It’s a fairly harmless show, though, in general — your typical 4-year-old preschooler, living daily life.

But the more I watched — I was stuck on the couch, nursing the baby — the more irritated I grew with the show.  It perfectly highlighted concerns I’ve had with many kids shows for awhile now.

I really don’t like most kids shows.  And here’s why.

Why I Hate Most Kids’ Shows

It’s been true since I was a kid, back in the early 90s.  Every kids’ show (intended for the preschool set) had kids and parents that were sweet, kind, and loving.  All.the.time.

Why be upset about that?

It isn’t realistic.  As a kid, I remember watching those shows, and seeing the same thing depicted on every one — the mother was ever-present with her children, fitting in a few chores around their needs, never working, never doing anything for herself, just being there for them.  These mothers were sweet and kind and gentle and endlessly patient.  They never got angry.  Never yelled.  They were never unfair to their children.  It actually made me sad that my own mother wasn’t like that.  Why couldn’t she make endless space for me to be a kid, mess up, have bad days — without ever losing her patience?

Of course, because she’s human, and humans don’t work like that.  It set up an unrealistic expectation for me, as a child.

In one scene from Caillou, Caillou deliberately wakes up his baby sister.  His dad’s response?  “Oh, did you wake Rosie on purpose?” he pauses for a second, then “Well, let’s go play.”  Not one word about how it’s not okay to wake sleeping babies.  Not even, “Caillou, we don’t go in Rosie’s room while she’s sleeping.  She needs her nap to feel good and grow bigger.  You need to go downstairs and play quietly while I get Rosie back to bed.”  (That’s positive parenting.  And some parents would just lose their minds and yell, “Why did you wake her up!  You know she needs a nap!  I don’t care how much you wanted to play with her, that is not okay!”)

In another scene, Caillou whines “Are we there yet?” several times.  And his mother answers sweetly, patiently, “No,” or “Not yet!” every single time.  She never gets frustrated.  She never says, “We will be there soon, Caillou, please stop asking and look at your books for awhile.  The time will pass faster if you are busy.”  Nothing.  What kind of parent doesn’t get frustrated, ever?

Of course, Caillou himself is pretty unusual.  In one episode, they take him to an active construction site (who takes 4-year-olds there??) and they let him help.  When he asks to go see inside the house, the adults drop everything to take him immediately (not realistic).  When he and his friend dig into the cement and draw, and look guilty when caught, the adult just swipes it smooth again without saying a word (not realistic).  And when Caillou is told it’s time to leave, and he’s loving it there, he smiles sweetly, bounds into the car, and says “Bye!”  (Yeah right)

I use this show as an example, but pretty much every show with a parent-child dynamic is like this.  All the adults are endlessly patient.  They don’t correct or admonish children who do something wrong.  Like, not at all.  It’s not even that they don’t yell (although in the real world, all parents reach the end of their rope sometimes and yell), they don’t say anything.  How can children learn if parents don’t correct them?

When kids are seeing lots of these shows, they come to have an expectation — without even realizing it — that this is how adults will act.  And it’s not.  Adults will not be perfect.  They will have bad days.  Days when they lose their cool and yell.  They will have to say, “I’m having a hard time, and you need to go play and give me a few minutes.”

Kids need to be around real life.  They need to see real life, and how things actually work.  They don’t need to be set up to believe that adults are all endlessly patient and sweet, because they aren’t.

Of course, one solution is to simply limit how much TV kids watch, or to choose shows that don’t have a parent-child dynamic.  I do really like Wild Kratts.  Fireman Sam isn’t terrible (there’s parent-child but it’s a little more realistic).  Bubble Guppies and Team Umizoomi are okay too.

But this whole “parents are perfect” thing still really bothers me. I mean, who came up with this?  Everyone working on that show knows that no human behaves that way (all the time).  We complain often about social media being a ‘highlight reel’ and the pressure this puts on everyone.  We complain about all the perfect ideas on Pinterest and how we feel we can never measure up — never be that organized or creative.  And yet, we totally ignore how TV tries to make us feel guilty for not being perfectly patient parents?

And let’s not confuse nonsense like Caillou with positive parenting.  Caillou’s parents are permissive parents.  They don’t correct him.  They rarely “make” him do anything (and he usually does whatever they suggest cheerfully).  That’s just not how it works.  Too many people — who believe in a more authoritarian parenting style — would look to this and say, “This is what’s wrong with parents these days.”

Well, I believe strongly in positive parenting, and I think Caillou’s parents are ridiculous, too.

At any rate.  Kids’ shows are nonsense, totally unrealistic, and ridiculous.

How do you feel about most kids’ shows?