How I Recovered After a Late Postpartum Hemorrhage |
AD 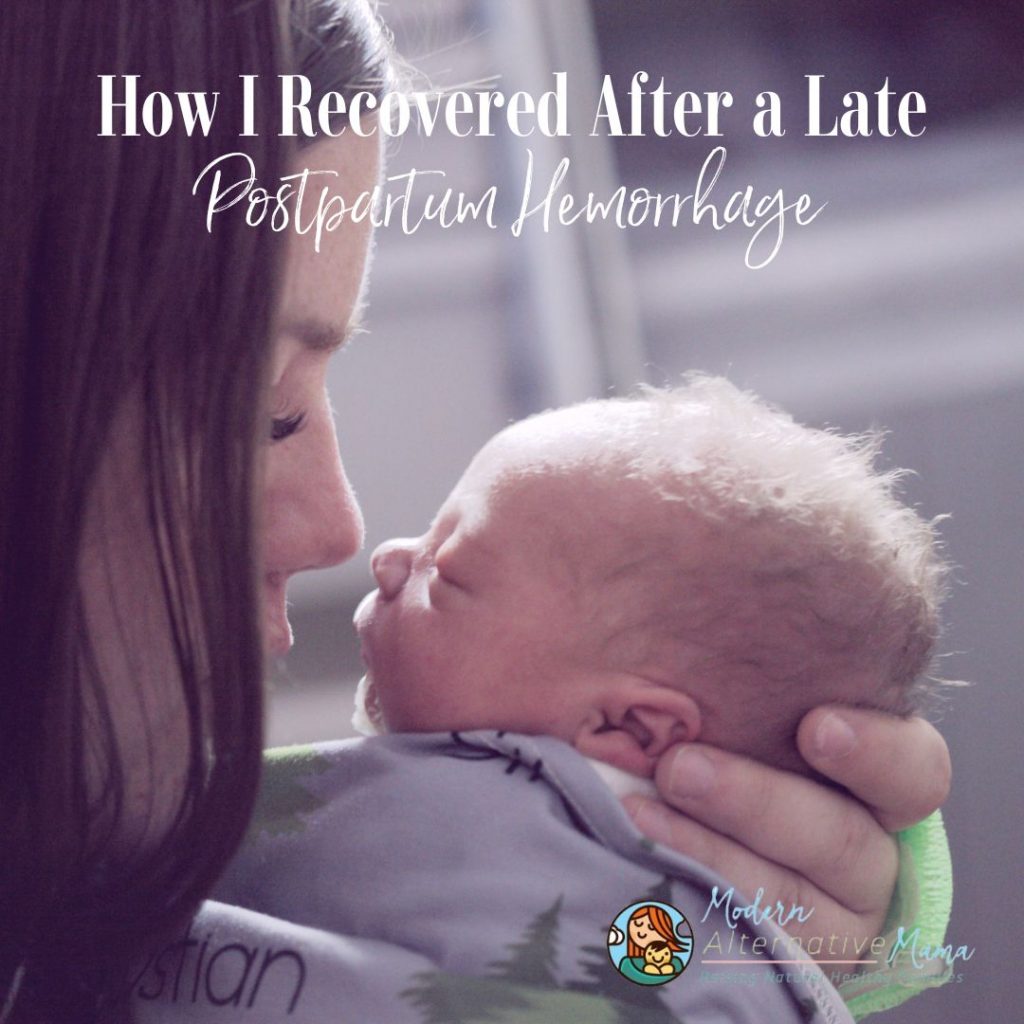 How I Recovered After a Late Postpartum Hemorrhage

How I Recovered After a Late Postpartum Hemorrhage

Having a new baby is HARD, let alone adding into the mix medical complications from delivery.  After a fairly uncomplicated pregnancy, and swift delivery of my first baby, I thought I had lucked out in the realm of pregnancy/delivery complications and setbacks. Little did I know that exactly one week after my delivery, my husband and I would be rushing back to the hospital due to a late postpartum hemorrhage.

Looking back, I try not to beat myself up too much, because honestly I hated the first three months after my little peanut was born. Yes, I said it, it was not all sunshine and rainbows in my household. A lot of it stems from postpartum depression, which I will discuss in a future post, but a good portion stemmed from my lack of recovery to make myself heal after my late postpartum hemorrhage.

There were multiple things I should have done, but did not do, that could have improved my overall health, and thus gave me the strength to deal with the normal challenges that occur in the transition to mommyhood.

What is a Late Postpartum Hemorrhage?

For me, I was exactly one week postpartum, visiting with family members from out of town one evening, when I felt a gush. This was rather unusual given that my bleeding had really slowed down the day before. I excused myself to the bathroom to discover I had saturated my pad. Being a postpartum nurse, I knew I needed to start a pad count to assess the bleeding properly.

With the second fresh pad in place and quickly filling up, I ended up calling the on call OBGYN. As I was on the phone with him, the flood gates opened. With that, I grabbed a towel and held it in between my legs to contain the bleeding and yelled for help. Luckily since family was there, they were able to watch the baby as my husband put me in the car and rushed me to the hospital.  Definitely scary stuff!

Causes of a Late Postpartum Hemorrhage

There are multiple reasons why a late postpartum hemorrhage may occur. One reason is retained placenta, which is what caused mine. Retained pieces of placenta or membranes in the uterus that may still be attached to the uterine wall prevent it from contracting adequately, causing bleeding. Infection can also result from this.

Other causes of late postpartum hemorrhage are uterine abnormalities or lower genital tract trauma often associated with traumatic deliveries such as forceps or episiotomy. Women who have bleeding disorders such as von Willebrand’s disease or hemophilia B and factor X1 deficiency are at increased risk as well.

Seeking immediate treatment is very important if you think you are hemorrhaging. Death from childbirth happens, and hemorrhaging is one of the leading causes! So call your midwife or OB right away! When we arrived at the hospital they started an IV to bolus fluids, and gave me Methergine, a medication to help the uterus contract. They also did lab work, a pelvic exam, and an ultrasound to see if there were any retained placental products.  My cause of hemorrhage was due to some placental fragments still left inside the uterus. For some women a manual removal of the remaining placental products is needed.

Depending upon the cause of hemorrhage, some may also need a Dilation and curettage (D&C) to remove products of conception. Others may also need a blood transfusion if an extreme amount of blood loss occurs. If the hemorrhage is life-threatening, a hysterectomy may be needed.

After the hemorrhage I was extremely tired and weak. This trumped any kind of pregnancy and new mom tiredness I had ever felt. The first day I got home, showering was literally the only thing I could manage. But the residual tiredness was probably the most exhausting part. I was extremely emotional, depressed, had trouble concentrating, and felt dizzy. It wasn’t until recently that I learned if you have a postpartum hemorrhage you are more likely to also have postpartum depression. And indeed I did. I will go into more detail on my experiences with postpartum depression in my next article.

How to Heal at Home After a Late Postpartum Hemorrhage

This may seem like common sense, but really needs to be discussed. My body was already exhausted from delivery and lack of rest for a solid week, and then sustained loss of blood. When trauma happens, rest is needed. But unfortunately, the most rest I got was in the hospital the night I stayed. I had my husband home for only a couple extras day after the hemorrhage because his paternity leave was already quickly coming to an end. But his lack of knowledge with a baby, left me with choosing to do all the work instead of letting him figure it out.

Even when I returned home, I should have set up camp in the bedroom or on the couch to rest, in between feeding the baby. Instead, the next day I resumed all my daily day to day tasks like cooking and cleaning. I even had more family come to visit, so I felt I had to “entertain.” Looking back, I should have asked for help. Since when did society change from the mentality that it takes a village to raise a child, to being some stepford wife who cooks and cleans and has it all together? I SHOULD have asked for help plain and simple. I NEEDED to just lay down and rest, and I didn’t.

I will say I did a great job of drinking plenty of water. Since I was breastfeeding I was very thirsty all the time, so I filled up a big pitcher of water and drank as much as I could. That being said, I also did my fair share of coffee in order to try and give me some form of energy. And not just black coffee, but the sugar and cream-filled kind. This just created short bursts of energy, that usually left me feeling more drained than anything. So water is your friend, drink up!

Whenever one sustains a loss of blood, iron supplementation is usually recommended. Iron is what your body uses to make hemoglobin, which is a part of your red blood cells that carry oxygen through your body. Now most OBGYNs will recommend some form of iron supplementation. Keep in mind that taking iron pills make you constipated.

But a great way to get more iron is to eat a wide variety of foods. Dark leafy greens such as spinach are wonderful sources of iron. Lentils, pumpkin seeds, chickpeas, and almond butter can also boost iron. If you are a meat eater, darker meats such as beef, venison and lamb are packed full of iron. For the seafood lovers, shrimp and oysters are great.

Other little known sources of iron are nettle seeds, which are recommended for anemia because they cleanse the blood vessels and liver, and strengthen our immune system. Beet juice is also great because it is not only rich in iron, but is important in hemoglobin synthesis.

A lot of the focus tends to be on iron, but B-12 is a great vitamin supplement that helps with weakness, fatigue and anemia. Some great sources of B-12 are fish and shellfish, meats, poultry and eggs.

Vitamin C helps improve your iron absorption. Add in foods such as tomatoes or strawberries or other citrus fruits to help improve absorption of iron. One thing to remember is to avoid dairy with iron rich foods because the calcium in dairy can make it harder for your body to absorb iron. So limit milk, yogurt, and cheeses when trying to increase iron intake.

Eating food rich in protein, along with super foods packed full of iron and vitamins will help improve all over health when combating anemia. I could only muster enough energy to turn on the coffee pot, and pop a bagel in the toaster, essentially living off carbs and sugar to keep me going. This led to small spikes of energy but really low peaks which did not help my feelings of exhaustion.

Looking back, my postpartum experience with my child could have been more enjoyable had I felt better mentally and physically. Now trying to live a more healthy lifestyle, I can truly say that the foods we put in our body fuel our bodies for better or worse.

A late postpartum hemorrhage is not only very scary, but can be life-threatening. Recovery afterwards takes time and lots of rest! A good support system goes along way when things don’t always go as planned. Simple things such as watching the baby so a mom can shower, starting a meal train to bring healthy nutritious food, or even running the sweeper will help in the long run. Had I done some changes in my diet and asked for help, my postpartum experience with my baby could have been a lot different.

Did You Experience a Late Postpartum Hemorrhage or Know Someone Who Did?