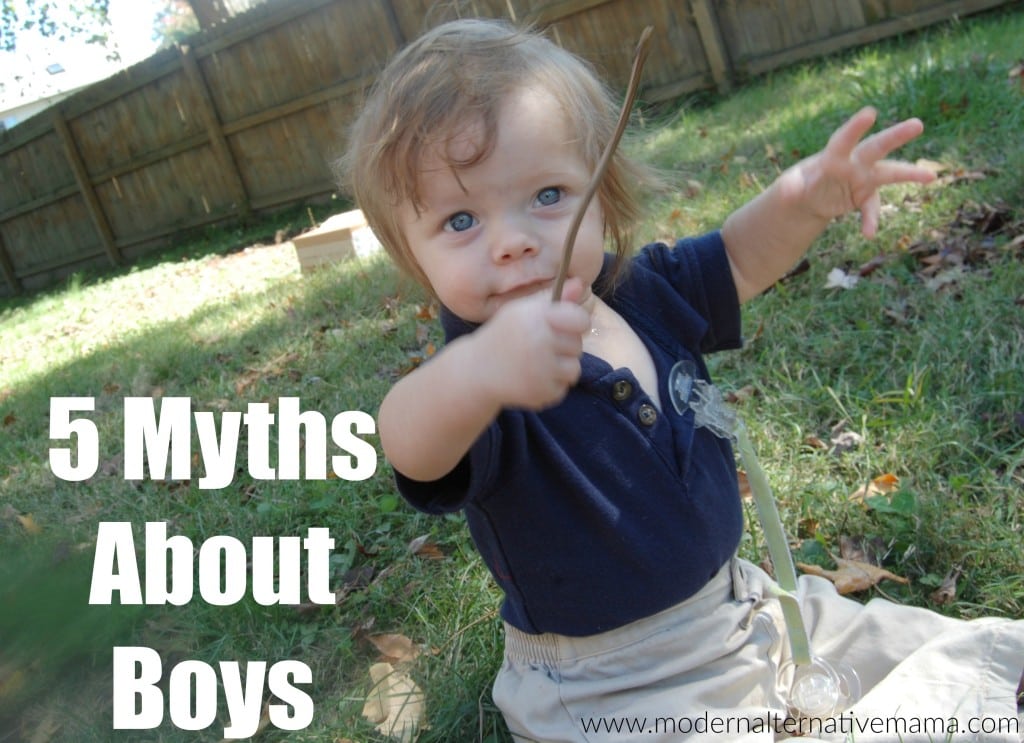 As a mom to four boys, I‘ve heard all kinds of things about boys.  When I’m at the store with all the kids (I also have one girl), I’ll hear things like, “Oh, all those boys!  Wow, they must keep you busy!”  They do, but not because they’re boys.  Or, “Your poor daughter, she’ll never get a date!”  Supposing she wants one, her brothers won’t have a say in the matter — believe me, she wouldn’t let them anyway (she’s the oldest and quite strong-willed).

It’s all well-meaning, and everything, but it makes me think these people have not been around a whole lot of boys.  I have — heck, I live with mostly boys every day of my life!  Five out of the seven people in our family are boys.  They’re all unique individuals.  And, they completely bust some of the myths about boys that are commonly passed around.

Next time you hear someone say one of these, don’t believe ’em.  There’s a good chance they’re repeating what they’ve heard, but that it isn’t true at all.

Oh boy.  Yes, some of them certainly are.  I have had a boy shout at me, “You’re ruining my life!  I’ll die if you don’t let me!” over whether or not I would allow more computer games.  From talking to other boy-moms (I have several friends who have 3 – 5 boys each), I know that this is not unusual.  Boys may be dramatic over totally different issues than girls — I’ve certainly never heard one flip out over his hair or clothes, as my daughter has — but they are definitely dramatic.

Sometimes!  I have one who will slosh through every mud or water puddle he can find and never care that he’s filthy.  And I have another who is horrified when he spills a drop of food on his shirt or his hands are the slightest bit dirty.  That child once stuck his hands in play goo, stared at them, then shook them like crazy to “get it off” while screaming until I came to clean him up.  (Then he stuck them in again, repeat.)  Same kid has to remove all of his clothing if he spills a small amount of water on it.  He can’t stand to be dirty.

On the flip side, my daughter cares not at all about dirt.  Unless she’s trying to be fancy.

Yes, yes they are.  Boys have big feelings, just like girls do.  My 2-year-old will cry furiously and shout “I’m very very sad!” if anyone offends him.  All the boys will cry over things that upset them, and all of them will talk to me about things that make them sad, happy, excited, and otherwise.  They absolutely do have strong feelings and can be very emotional.

There’s some weird perception that babies are just for girls.  Um.  It requires both a male and a female to make a baby, and boys grow up to (often) be daddies.  My boys love babies — they love to play with our baby, and they are interested in other peoples’ babies.  I have run into other boys who really love babies and small children, too.  Heck, I even have friends who have husbands who really love little babies.  Babies are for everyone!

5. They’re not really different from girls.

Here’s the thing.  Boys are absolutely unique, and they are not stereotypes.  As I’ve detailed above, they cross into what many consider “girl” territory all the time.

They’re still different.  My girl doesn’t wrestle non-stop and pound people for fun, and my friends with several girls tell me theirs don’t do that either.  My boys, do…all.the.time.  They laugh while they do it, but they do it.  (I can’t even take them shopping sometimes because my oldest two boys will chase, punch, and generally fight each other — while laughing — the entire time, and they’re in other peoples’ way and that’s not cool.)

My boys have unique interests, but they still trend towards things like computer games, Legos, and more traditional ‘boy’ toys.  (Not that they haven’t played their share of dress-up – with an older sister, it’s practically required.)

What myths have you noticed about boys?