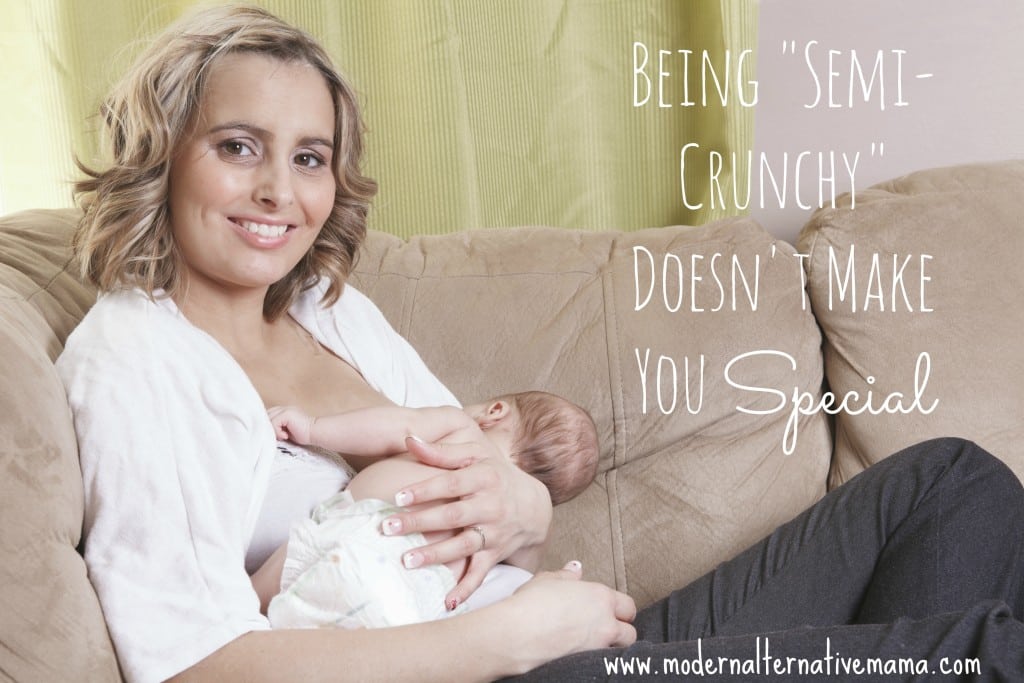 I’ll admit, this post is born of frustration.  But, with good reason, I think.

There’s a subset of “crunchy” moms who sometimes drive me crazy.  They are not, as always, the moms who say “this is what works for me.”  I absolutely support any mama for finding her vibe, for making the choices that really work for her, for ignoring labels and groups and just doing her.  That is not what this is about.

No, this is about a certain group of moms, moms who would probably describe themselves as “semi-crunchy,” who actually go around bragging about how smart they are because they’re crunchy…ish.  That is, they embrace some aspects of crunchy, but they’re also “smart enough” to trust the mainstream, or scientists, on certain topics.  They’re condescending about how this makes them better than all those too-crunchy, natural-or-bust moms (which is how they perceive us).

That.  That condescending, “I know better than you stupid natural mamas” is what drives me insane.

As I said, whatever works for them.  Cool.

But, semi-crunchy mamas?  You’re not special.

Here’s what I’m talking about (and I’m not quoting anyone here; these are just examples of things I have read):

“I totally love crunchy and natural.  I mean, I had my baby without an epidural.  Plus I breastfeed and cloth diaper.  But I also vaccinate.  I’m smart enough to know that doctors and modern science aren’t the enemy.  I vaccinate my baby because I know that is the best thing.  The ‘crunchy’ is so backwards on this issue.”

“Look, natural remedies are great.  I’m happy to use a spoonful of honey for a minor cough.  But if my kid has a fever or an ear infection, I’m going to use ‘real’ medicine to get it down, or call a doctor for antibiotics.  I love my baby, and I wouldn’t let him suffer like that.  Save the experiments for yourself.”

“I think natural birth is great.  I had one, in the hospital, with a midwife!  But I would not have hesitated to have a c-section if needed, and I would never have a home birth.  Birth is scary, and emergencies happen super quickly.  I think home birth is unnecessarily risky, and I just couldn’t do that to my baby.  My experience isn’t more important than his safety.”

In all of these situations, the woman doesn’t actually come right out and say, you’re a bad parent and your choice was stupid.  But it’s pretty clearly implied.

Worse, because they supposedly embrace some aspect of “crunchy” culture, they’re often seen as “speaking for the group” (even though no individual speaks for the whole group!), and they’re seen as being right.  As being sane.  As shaking their head in embarrassment at all those mamas who “just don’t get it” because of their “dangerous” alternative choices.

Look, you can vaccinate your kid.  You can take him to the doctor.  You can have him in a hospital.  I really don’t care — that’s not what this is about.  Heck, I have plenty of friends who have done all of those things and wouldn’t do otherwise.

The difference is, many — including my friends — aren’t smug and condescending about it.  It’s all in the attitude.

You’re not better because you do something more mainstream.

And honestly, it’s pretty crappy to brag about how great you are because you did something “normal” or “typical.”  People who make alternative choices already face enough crap just for being different.  They face people who constantly misunderstand — purposely — why they make the choices they make.  They have to face people who say “You just don’t vaccinate because Jenny McCarthy” or “You want a home birth to prove something/because your experience matters more than your baby’s life/it’s trendy” or “You only feed your kid organic food because you’re afraid of chemicals you don’t understand.”

The last thing they need is to deal with more crap from someone who claims that ‘natural is good, but…’ and proceeds to trash them for a specific choice they make.

Really, mamas.  You just aren’t special, or smarter, or better, because you made a different choice.

I have to say this does go for natural mamas, too.  We aren’t smarter or better because of the choices we made, either.  We did what was right for us.  And if you’re an advocate for (breastfeeding, home birth, not vaccinating, etc.) people can’t and won’t hear you if you come off like you’re amazing and the people who don’t do things the same “aren’t awake” or “are sheeple.”

Let’s Be Supportive Instead

Rather than trying to speak for a whole group, or rather than bragging about how great you are because you ______, just stop.

Support other mamas.  They don’t have to think like you, or make the same choices you do.  That’s okay.  Stop thinking they are uninformed, uneducated, ignorant, or bad people.  Stop saying that they are, either directly or indirectly.  Just trust that all mamas love their babies, many choices are okay, and everyone is doing the best they can.

Also, it’s cool to say “I did ____ and it really worked for me.  Are you interested in hearing more?”  or “Did you know ______ is an option?”  There are respectful ways to offer new information.  We can and should talk about other ways.

Do you think being “semi-crunchy” makes you special — or any particular parenting choice?