Is Unschooling Okay for Christians? |
AD 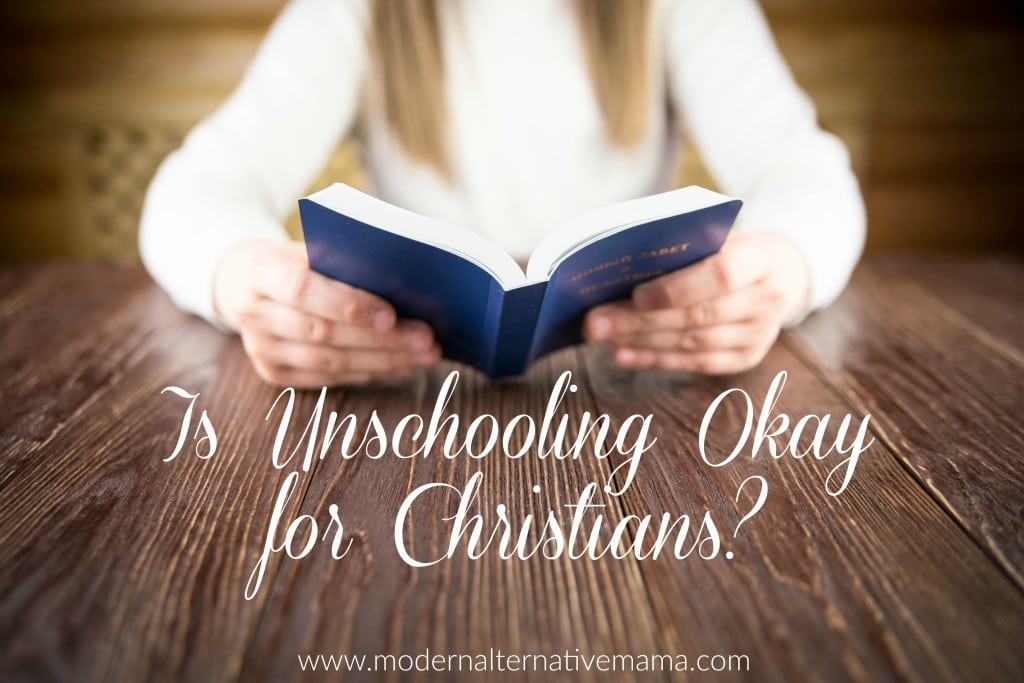 Is Unschooling Okay for Christians?

This morning, I hopped on my computer to check my email quickly before heading off to our homeschool coop.  I spend most of my time deleting stuff I don’t really need and save the important stuff for later, when the kids are napping or busy.  But this morning, one email, in particular, caught my eye.

It was titled “The Rise Of Unschooling And What It May Mean For Homeschooling Freedom.”  Uh-oh, I thought.

I opened it.  I read it carefully.  I read it word-for-word, mulling it over, making sure I understood the author, Jacinda’s, perspective and purpose in writing it.  I didn’t let myself skim and assume.

Unfortunately, I did find the post problematic, which is why I’m writing now.  My intent is not to call out Jacinda in particular — I think that her perspective, for her own family, is perfectly valid.  I think, however, that the post got a little too general, and might confuse or upset some people, so I need to address some of the issues raised by it.

Is Unschooling Okay for Christians?

The post effectively says that unschooling isn’t Christian because it is “leaving children to be wild” and does not place the parents in proper authority over the children.  It also states that any homeschooling that is done for any purpose other than to glorify God is narcissistic, and therefore worldly, and wrong.  She was also concerned that by families choosing to unschool (which does not do tests/grades or other measurable things), that everyone could lose their freedom to homeschool.

There’s a lot to unpack there.  It’s important that we unpack it, too, because a lot of parents share these criticisms, and one other one that was shared by readers (that unschooling is just “what all good parents do” and is not sufficient education/training for children).

Let’s first look at that first part: that unschooling means that parents are no longer in authority over their children, and not “training” them properly.

This is a really hard one to explain because there is a totally different mindset here.  The mindset of the more conservative/fundamental Christian is one of loving, cautious discipline and continuous reproof.  They believe that they have been charged by God with raising their children with a firm, yet gentle hand, and that this requires a lot of hands-on training, an expectation of obedience, and, where needed, physical discipline (spanking).

What this looks like day-to-day, in many households, is a whole lot of love, happiness, play time — basically what you’d see in any other household.  These houses, in my experience, are likely to have very clearly posted rules, of which the children are reminded as needed.  Parents correct gently and with words.  They’re hands-on.  But, if children do not follow directions repeatedly, or if they commit a more serious infraction, then parents use spanking to correct their behavior, followed by a conversation about the behavior and what to do instead.  They pray together.  They worship together.

The point is, they mean well.  And it can be very peaceful most of the time.  (There are absolutely households that spank in anger, that spank often, that spank in entirely inappropriate ways.  And I’m not defending spanking at all, in any situation, just explaining that they love their children and their homes are not filled with anger, fear, and constant physical abuse.)

On the other side, is the unschooling/gentle parenting philosophy.  But…are they really that different?

I’ve been on both sides.  The actual means are a little different.  The underlying beliefs about “how” to parent are quite different.  But the day-to-day reality, and the ultimate goals are actually the same!

Unschooling and gentle parenting are not allowing wildness.  We parent in this manner, and we still have clear expectations for our children.  We are all members of this family and this household; we will all treat one another with respect and we will all pitch in with the chores.  If the kids are mistreating others, I will address that.  I am hands-on with them, frequently disciplining them (not punishing) as needed.  We separate them if they’re having a hard time.  We make them our “buddies” if they need a little break (also called “time in” by some).  We are lovingly, carefully, training them how to be decent human beings.

Besides the spanking and the religious teachings, it’s really very much the same.  Both conservative Christians and gentle parents (regardless of religion) believe that children need a lot of attention, clear expectations, gentle reminders, grace for mistakes, correction where needed, and time to explore the world in a safe way.

Unschooling isn’t unparenting.  At all.

Unfortunately, Jacinda makes the mistake of thinking that it is.  Of painting unschooling/gentle families with a very broad, and erroneous, brush.  I would invite her, and others, to take a closer look at this philosophy, and to see how it really does line up with the values that she holds about raising respectful children.

I’m going to have really call this one out here.

Jacinda states that parents began to homeschool for all kinds of reasons — for academic advantages, to spend more time with their children, because they didn’t like the public school methods, because they opposed standardized testing.  That it became more about giving children an academic or life-long advantage, instead of about glorifying God or following His calling.  She calls this narcissistic.

I’m going to have to object to that strongly.

It isn’t possible, first of all, to know what is in someone else’s heart.  Perhaps God has laid homeschooling on them because their child is struggling academically.  Maybe God has led them to homeschool because they need to be spending more time shepherding their children instead of sending them away to school.  We simply do not know how others are thinking or feeling.  We don’t know how God speaks to them.  We shouldn’t assume that we do.

Additionally, these things — wanting an academic advantage, for example — are not mutually exclusive from God’s calling.  He uses people in many different ways.  He may want a child to be homeschooled to have an academic advantage, because that child is going to grow up to do great things for the world, and needs that education to do it.  We don’t know!  God works in mighty ways.

From a non-religious perspective, this statement (of narcissism) smacks of serious judgment.  It’s looking down at people who choose not to live based on religion.  It’s essentially calling people out simply for having a different perspective.  This is the kind of statement that turns people away from the church.  The kind that assumes that everyone who doesn’t 100% believe and follow the church’s teachings is basically a hedonist and is going to hell.  (Jacinda did not use those words.)

When we are dealing with the world, we must seek first to understand, and then to be understood.  At no point did Jesus go around using such strong language against those who did not believe what He believed.  He spoke the truth. He set things right — but reserved His harshest criticism for religious leaders!  We must always, always be cognizant of the effect our words can have on others.  I believe this was a poor choice of words.

I understand that from Jacinda’s perspective, she is living truth.  She is living in the best way she knows.  She seeks to glorify God with all that she does.  I believe she means well!  I’m glad she feels strongly convicted.  I am just concerned about the way this message has been communicated.

Is Unschooling Just “What All Good Parents Do?”

I have heard this one a lot.  Jacinda didn’t address it, exactly, but commenters did, and people have said this to me, directly, in the past.

There is this thought that unschooling is truly just “letting kids do whatever” and that this is insufficient to train them for a productive adult life.  When people describe unschooling in more detail, for example, “We read books together, we have outdoor play time, we visit museums and parks, we have play dates” many adults think, well, I do all that too!  Kids need actual academic structure above and beyond that to really learn.

Kids, especially young kids, actually learn the best when they are given plenty of opportunities to play and explore the world.  They don’t learn a whole lot from workbooks and assigned academics.  There’s the idea out there that they need these things to become disciplined.  But they don’t.

Self-discipline, the ultimate goal, does not come from parents assigning work, correcting it, and leading education.  And, kids don’t lack knowledge because their parents didn’t direct their learning.

Several studies show that unschooled adults have the same developmental capabilities (or greater) as their schooled peers and that the idea that they are “lacking” due to structure is wrong (1, 2, 3, 4).

At any rate.  It’s hard to understand, but “formal” academics are not required for learning.

Is unschooling okay for Christian — or does this even matter to you?