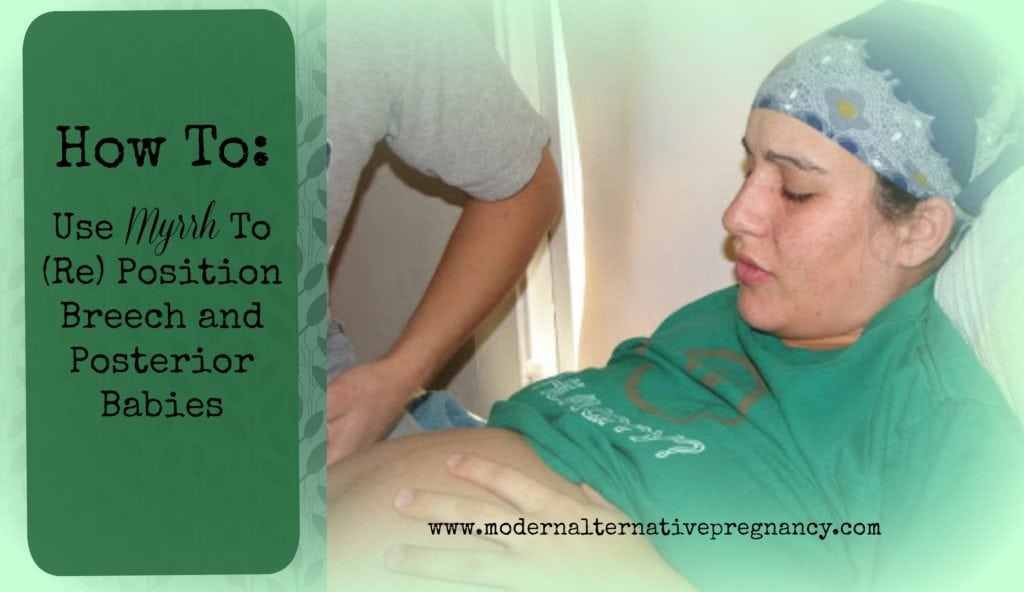 How to Use Myrrh to Re-Position Breech and Posterior Babies

Up until my sixth pregnancy the only thing I knew about myrrh was that the Magi brought it as a gift to Jesus, along with gold and frankincense.  In Christmas sermons since childhood I had heard that this was the oil used to anoint dead people for burial.  I knew of no other uses for myrrh.

Then my sixth pregnancy. It was an emotional roller coaster for 9 months. So much was going on in my life and the lives of those I cared deeply for….well, suffice it to say I spent nine months either vomiting or crying.  Throughout the pregnancy our little daughter remained stubbornly breech. She just like to sit right there in her little pelvis bowl with her head up in my ribs.  She was not inclined to move. At all.  Towards the end of the pregnancy we had to face the fact that this child, very likely would try to make her grand entrance booty first.

This didn’t particularly bother us, because our midwife is a breech-catching-rockstar. And this was our 6th go ’round. I knew my body. I knew my cervix and pelvis would open. I had already given birth to some pretty hefty babies. So, all-in-all, I was OK. However, we thought IF we could encourage her to flip around, that would be great and make things slightly less complicated come birth-day.

I tried various yoga postures. I tried soaking in pools and swimming. I got chiropractic adjustments. No dice. She just sat there upside down (or right side up, whichever way you express that in this case).

Then my midwife emailed me an article about using myrrh essential oil to position babies in the womb.  In the article Ina May Gaskin had a client who used myrrh to turn her breech baby. I thought, “Well, why not!”  So, I got some myrrh and some carrier oil (I think it was almond oil).  I applied it to my belly each afternoon before taking a nap.  I rubbed it rather liberally over my belly and then slept. When I woke up she was transverse (sideways, horizontal). Then she would slide back to breech.

This went on for a few days.  Finally one day, during my usual myrrh nap, she flipped all the way around. She was born the following morning head DOWN!

Fast forward to my ninth pregnancy.  My water broke early and active labor did not start immediately. (I shared my experience in this post.)  By this point, eight pregnancies and births under my belt, I was pretty good at accessing the position of the baby. And this child was posterior if ever there was one!  Plus, the back labor didn’t lie. The baby was resting pretty high and was not shifting.

I tried asymmetrical postures, walking, stretching, yoga, pilates. He remained sunny-side-up and high up in my pelvis. After 4 days of on-and-off labor, a friend called and asked if I needed anything. “Do you by any chance have myrrh essential oil?” Yep! She did. (Hurray for those granola-girlfriends!) She brought some right over.

I started small with just a few drops on the lower part of my belly where his head was.  And then just laid on my side, relaxing.  I did this a couple times that day. I applied the essential oil a little more liberally that night. Then I went to sleep.

The next day he was anterior (the best way for babies to be positioned for birth). Myrrh worked again!

Why Does It Work?

Let’s face it, it’s weird. It’s sort of primitive and intuitive and weird.

There Are Several Theories About Why This Works- Here Are the Top 4:

#1– In Chinese medicine it is said that myrrh has blood moving powers and is therefore used commonly for uterine problems.

#2– In Ayurvedic medicine it is said to aid in circulation and nervous system disorders.

#3– The name myrrh is derived from an Arabic word meaning “was bitter.”  It is said to relieve pain and help stretch sinews.

#4– According to aromatherapy practitioners, myrrh cools and calms agitated emotions and promotes feelings of empowerment and motivation!  (A great emotional state for birth!) It is said that the scent helps to overcome emotional upsets, too. (Could be why it worked so well in my highly emotional almost-breech pregnancy and birth!)

Although I still don’t totally get why or how it works, I have to say those Magi sure brought a practical gift to the Christ Child.  It has been a true blessing to me, helping me to give birth safely, empowered, calm and with babies who were breech or occiput anterior. (Medical Speak for “head down, facing mama’s back.”)

Have You Had a Baby Who Was Breech or Posterior? What Did You Attempt to Get Them to Reposition?