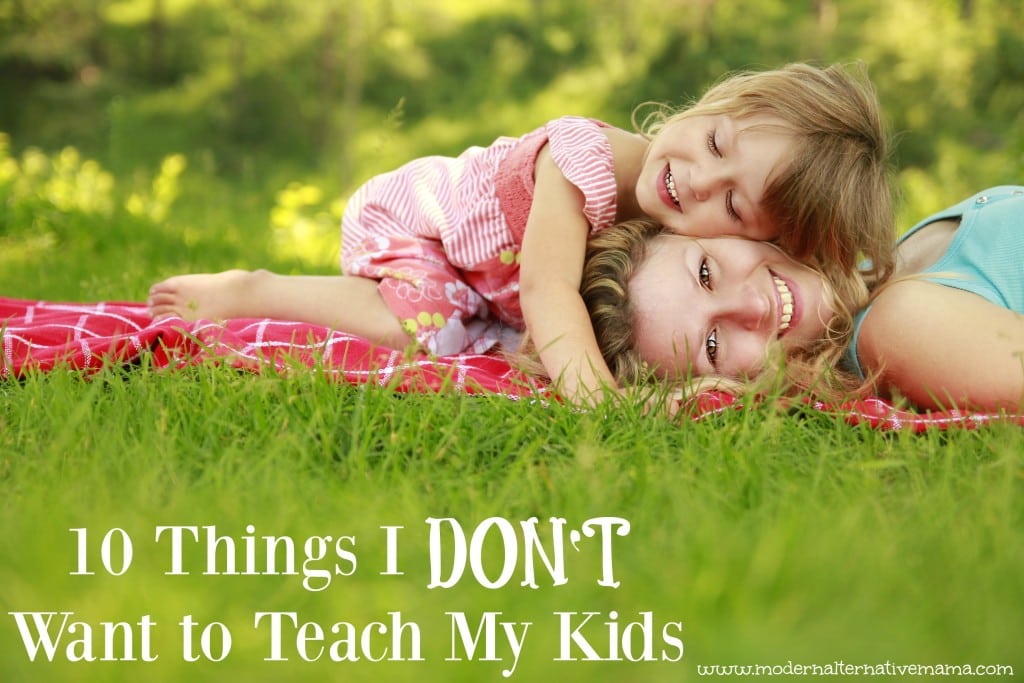 10 Things I DON’T Want to Teach My Kids

As parents, there is always something more we want to teach our children.  There’s the obvious stuff, like how to read, or how to ride a bike.

Then there’s the not-so-obvious stuff, like how to be a good person, or religious teachings (or lack thereof).  Sometimes what we want to teach our children isn’t even obvious — we have a sense that there’s something important to impart, but we couldn’t put it into words.

Raising tiny humans is a whole lot of work.

10 Things I DON’T Want to Teach My Kids

I think that’s the wrong message.  Parents mess up.  They do and say stuff they shouldn’t.  Instead of pretending that you were in the right, because you’re an adult, ‘fess up to your mistake and apologize to your child (if it affected them).  I want to model for my kids that that’s how you handle it when you do something wrong that affects someone you love.  In hopes, of course, that they will be quick to admit when they’re wrong (when they’re older), and quick to apologize, forgive, and move on.  It’s so much better than clinging stubbornly to what you did and refusing to apologize.

Plus, kids do what we do…not what we say.  It doesn’t do any good to force them to admit mistakes and apologize when they see you refusing to do it!

2. Hit People When They Do the Wrong Thing

Pretty much every kid, at one time or another (and sometimes often), gets mad about someone taking their toy or being mean to them, and hauls off and smacks them.  And pretty much every parent steps in and corrects them — “We don’t hit!”

But some parents follow up on that by spanking the child.  That is…they hit the child who did something wrong, to teach them not to hit people who’ve done wrong to them.  I find that confusing…and children do too.  Plus, pain doesn’t teach them anything.  If they associate pain with having done something in particular, they might not do it to avoid punishment, but they won’t understand why they shouldn’t.  They also might just try not to get caught.  And, little kids usually hit because they become completely overwhelmed by their feelings and just don’t know what else to do.  (And they should grow out of that.)  Adults do know better.

Bottom line, I won’t solve my problems with them by hitting them.  And I’ll expect them not to solve their problems with others by hitting, just as soon as they’re developmentally capable.  (And yes, I’ll step in and remove them from the situation if they hit in the meantime — a much better alternative.)

I find this honestly dangerous in this day and age.  Too many children have been abused in some form because a supposedly-trusted adult told them to do something (“come with me” “let me touch you” etc.) and they obeyed because, well…they’re supposed to obey adults.  Of course, parents never intend this when they ask their children to obey, but if you tell your kids to obey all adults, without question, then this can happen!

We’re not always very nice to kids who are having a hard time — who are melting down, crying, and whining.  We tend to see those behaviors as “bad,” and needing to be “trained out” of them.  Some people even say, “It’s okay to have a bad day, but they can’t act like that!  Then they’ll think that’s how they get their way and do it all the time!”

The truth is, everyone has bad days.  And on those days, they might cry.  They might snap at others.  They might be disagreeable and not very cooperative.  That is true of adults as well as kids!  Adults just write it off as “a bad day” and that’s it — somehow, it’s okay if you’re an adult, you don’t have to learn that your behavior “is not okay.”  But a small person, who has very little self-control, and lacks the experience and perspective of an adult, is supposed to keep it together.  Somehow.

I want to teach my kids that’s not true.  I want them to know it is okay to have a bad day.  It is okay to mess up and say things that aren’t very nice (and when they feel better, we’ll talk about it).

5. Most of Life is Stuff You Don’t Like or Want to Do

So many people are convinced that life just is terrible.  That it’s an endless series of things you don’t want to do, but have to do.  That it’s the daily grind of going to a job you hate, living with people who annoy you, in a place you don’t really like, and that basically life is terrible — but, that’s it and there’s nothing you can do about it.

We’ve modeled this — my husband and I worked for 10 years and saved up and he quit his job so we could run our business together full time.  We have a lot of freedom now, even though we’re making much less money.  We’re happier and work-life balance is better.  It’s worth the risk!

6. It’s Okay to Dislike People Who Are Different

Some people just don’t like others because they are different.  I see this on social media ll the time — “If you don’t agree with me about _____, then just unfriend me now!  Everyone who thinks _____ is a bad person/bigot/racist/etc.!”  Oh, I am so tired of that.

Of course, it’s also okay to just plain dislike an individual for any reason.  You won’t be friends with everyone, and that’s fine too.  It just needs to be because you and the individual don’t get along, not because you’ve painted them as a stereotype or refused to get to know them because they are different than you.

7. Other Peoples’ Opinions of Them Matter

Just try telling some random person that you’re homeschooling your kids — you might hear “Oh, are they going to get enough socialization?” or even “Your kids are going to turn out weird.”  Try telling them anything that’s outside what most of the mainstream does, and you’ll hear all kind of ignorant comments.  (To be fair, most people mean well and just don’t know.  I’m not insulting them.  Rude ones are annoying.)

People don’t like things that are different.  They want you to “fit in” and be like the others for your whole life.  It really never goes away, it is just expressed differently.

I want my kids to know that it doesn’t matter a bit.  It doesn’t matter if people don’t like their choices, or who they are.  They aren’t doing what they’re doing for approval; they’re doing it because it’s right for them.  I want to teach them to be strong enough to honestly not care about the opinion of strangers.

Lots of people will disagree with me on this one.  But, debt is a bad thing.

Debt is owing someone else.  Debt is not owning what is supposedly yours.  Debt means that things can be taken away from you if you suddenly can’t pay.  Debt is a scary place to be.

We don’t have any debt and haven’t for almost a year.  Prior to that, we hadn’t had any debt except our mortgage for a few years.  Having no debt, and having savings, and having a budget so we know what we can really afford, is very freeing.  It’s good to know that what’s ours, is ours.  That we won’t lose it if anything bad happens.  That our savings will handle emergencies (or our insurance).

That’s what we’ll be teaching our children.  Save for a rainy day…don’t take out debt.

My oldest is 8 years old and doesn’t have a clue what “grades” are.  In fact, none of my kids know that kids in schools are actually measured in any way on how much they learn and the work that they do.  They don’t know that there’s a “right” way and a “wrong” way or pace to learn.  They don’t know that people judge you based on how “smart” or “stupid” you are.

No, they have absolutely no clue about these sorts of things.  And they won’t.  I want to teach them that learning is something we simply do, every single day because we want to know new things or understand what is happening in the world around us.  I don’t want them to think that learning is something that only happens with worksheets, direct instruction, and in a classroom, and that you need some arbitrary authority figure to give you a number or a letter to judge if you’ve done it right or not.

That sounds so foreign to me now.  So ridiculous.  I hope it sounds ridiculous to them, too.

10. Common is the Same as Normal

Lots of people confuse these two, but they are very, very different.

I’m going to teach my kids the difference between “common” (something that happens often) and “normal” (something that is healthy, good, and supposed to be happening).  They need to understand that all that we see around us might be common, but a whole lot of it isn’t normal!  I don’t want them to judge how they “should” be based on how others around them are.  I don’t want them to bow to peer pressure, or feel bad if they’re different.  I want them to be strong in who they are!

What are some things you don’t want to teach your kids?