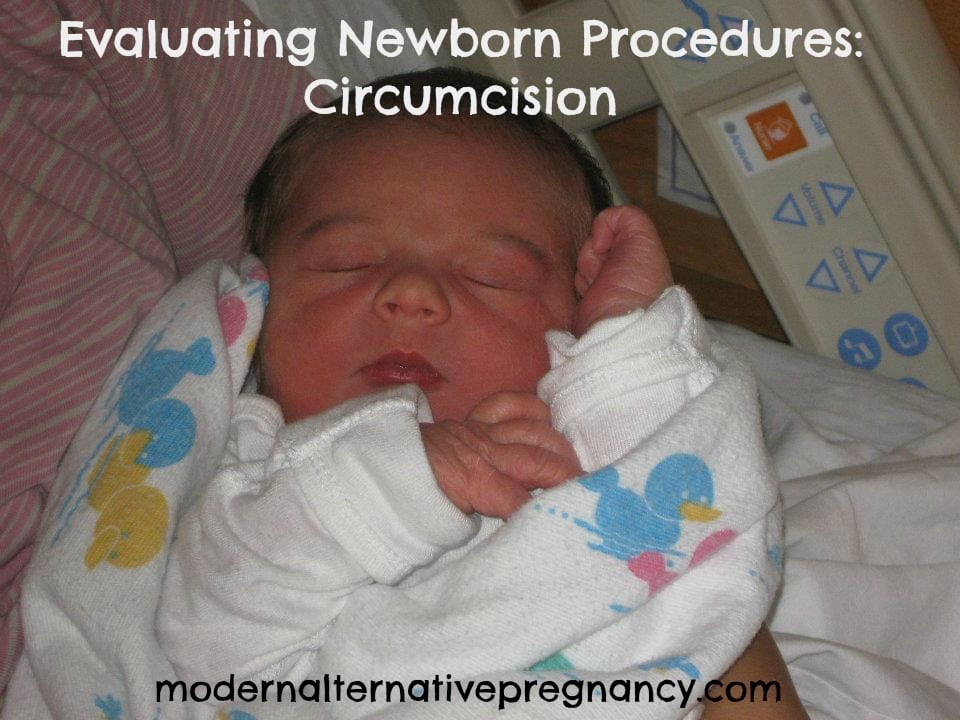 Just as there are many pregnancy and labor interventions (such as diagnostic tests, ultrasounds, induction, fetal monitoring, labor augmentation, etc.) that you should take the time to evaluate and determine what is evidence-based and appropriate for your situation, there are also many newborn procedures that deserve the same kind of attention. One such newborn procedure is circumcision for male babies and I invite you to think through this procedure with me.

Circumcision is the surgical removal of the foreskin from the penis.

The foreskin, also known as the prepuce, is a “double-layered fold of smooth muscle tissue, blood vessels, neurons, skin, and mucous membrane that covers and protects the glans penis and urinary meatus when the penis is not erect”. The foreskin is a movable sheath that completely surrounds the glans, extends beyond it as well, and is tightly fused to the glans at birth- it will loosen over time and normally completely separate and become retractable by the end of puberty.

The foreskin has a varying length among males but comprises at least 1/3-1/2 of the penile skin system.  In an adult male the surface area of the foreskin is about 15 square inches and it contains 10-20,000 specialized nerve endings, 240 feet of blood vessels, natural lubricants, fine-touch pressure receptors called Meissner’s corpuscles, and several specialized structures, including the frenulum and ridged band. It stores pheromones, aids the glans in developing normally by keeping smooth, moist, and at the proper temperature, allows for comfortable erections in adulthood, and has a unique gliding mechanism.

The foreskin is an intricate structure  that serves many purposes  and has protective, immunological, sensory, and sexual functions.

Circumcision removes the foreskin and destroys these functions.

Under What Circumstances is this Procedure Recommended?

Infant circumcision is very common in America, with parents giving many reasons for choosing circumcision- ranging from perceived health benefits, because the father of the child is circumcised, or even because they prefer the look of a circumcised penis, and some individual doctors may recommend circumcision. In 2012 the American Academy of Pediatrics (AAP) released an updated circumcision statement, and while still not recommending circumcision they gave a more favorable view, which is out of sync with all other worldwide medical groups, claiming that the “health benefits of newborn circumcision outweigh the risks”. In their technical statement they admit that “the true incidence of complications after newborn circumcision are unknown”, which makes it difficult to understand how they came to conclude that the benefits outweigh the risks when the risks are not fully known.

Soon after their report was released many physicians from around the world, including pediatricians and urologists, published a statement calling out the AAP’s circumcision task force and their statement for cultural bias and explaining how the “benefits” which the AAP assigns to circumcision are overstated, misleading, and/or have nothing to do with infants and touches on how the analysis failed to take into account the anatomy and functions of the foreskin.

They conclude that (emphasis mine):
“There is growing consensus among physicians, including those in the United States, that physicians should discourage parents from circumcising their healthy infant boys because nontherapeutic circumcision of underage boys in Western societies has no compelling health benefits, causes postoperative pain, can have serious long-term consequences, constitutes a violation of the United Nations’ Declaration of the Rights of the Child, and conflicts with the Hippocratic oath: primum non nocere: First, do no harm.”

Furthermore, a risk/benefit analysis is only appropriate when a procedure is medically indicated and this is not the case with routine infant circumcision. As Brian Earp notes in his critique of the CDC’s proposed circumcision guidelines (which mimic the AAP’s statement), that along with misconstruing the risks involved with circumcision by only discussing the immediate surgical risks and ignoring intermediate or long terms complications, some of which are very common:

“[T]he standard heuristic for evaluating non-therapeutic surgery (i.e., surgery performed in the absence of disease or deformity) is not benefit vs. “risk of surgical complications” but rather benefit vs. risk of harm. In this case, at least one relevant harm would be the inherent loss of a healthy, functional, and erotogenic penile structure, amounting to approximately 30–50 cm2 of densely innervated, elastic genital tissue in the adult organ.”

As with all body parts, there are valid medical reasons to remove the foreskin, but none of them apply to a newborn with a healthy, normally functioning penis. It is not recommended. Photo By: Thirteen of Clubs

How is Circumcision Performed?

Circumcision is often done while the infant is strapped into a circumstraint to keep him still. How circumcision is performed depends on what device is used for the surgery, but all involve slitting the foreskin to allow room for inserting medical instruments, tearing the foreskin from the glans to which it is fused so that the device can be placed, crushing the foreskin and cutting off some portion of it– and in the case of the plastibell, waiting for the remaining foreskin tissue to die and fall off with the device sometime after the procedure.

The foreskin is not a separate structure from the rest of the penis so there is no delineation on the penis as to what is “foreskin” and what is shaft skin. It is up to the doctor performing the surgery to determine where to make this cut. There are many different styles of circumcision (high and tight, low and loose, etc.) and which type is most commonly done on infants has changed over time and varies from doctor to doctor. When the circumcision procedure is complete, the penis has been partially skinned and the glans left permanently exposed rather than in its normal, internal state.

There are 3 Circumcision Devices Currently Used in America:

As you would expect with any surgical procedure, circumcision is very painful and can be traumatic. In the past no anesthetic was used because it was thought that infants did not feel pain, this persisted until the late 1980’s. We know now that this is not the case- not only do babies feel pain like adults do, they also have a lower pain threshold.

It is now recommended that some type of anesthetic be used during circumcision, but this is up to the discretion of the doctor doing the surgery and sometimes nothing is used.  Sometimes a sugar pacifier is given but this has been shown to be ineffective.

In addition to pain and trauma, the effects of which can run deep enough to even change the structure and physiology of the nervous system and cause other complications, when no anesthetic is used both short and long term changes in an infant’s behavior have been observed.

EMLA cream– a topical anesthetic, which according to the package insert is not meant to be used on infants younger than one year or to be used on the genitals of children. It has also been shown to not be very effective, even when given the time needed to take full effect.

Dorsal Penile Nerve Block and Subcutaneous Ring Block- both injections of local anesthetic, and both with mixed results as to their effectiveness. One study found that the nerve block can reduce pain relative to the use of EMLA cream alone while another study found that cortisol levels were not significantly different between babies who received the anesthetic and those who didn’t. A study conducted between all three types found the ring block to be most effective.

Even when anesthetic is used, it has been determined that there is nothing that completely eliminates the pain of circumcision.

The penis will need special care until the circumcision wound heals, perhaps longer. At least one study recommends applying Vaseline to the circumcised penis for 6 months post-procedure in order to prevent meatal stenosis, a common complication in which the urethral opening (meatus) gets smaller because of friction and chafing due to lack of foreskin. It is recommended that parents pull back and clean any remaining foreskin that covers any part of the glans to prevent adhesions and to prevent debris from becoming trapped.

What is the History of this Procedure? When and Why Did it Become Routine?

Different types of circumcisions and genital cutting have been performed for thousands of years for many different reasons among different groups of people. For the modern medical circumcision practiced in America today we look back to the 1800’s for its beginning.

This sounds strange to us, but many medical professionals at the time agreed. Another doctor, John Hutchinson, observed that Jewish men had lower rates of syphilis and wrongly concluded that this was because they were circumcised. The idea that the foreskin was harmful began to grow in both Britain and America.

Some doctors claimed that, rather than protecting the glans, the foreskin actually irritated the penis and even taught that the presence of the foreskin caused problems with other areas of the body, such as the nervous system, digestive system, and spine. One doctor claimed to have cured muscle paralysis through circumcision.

Other doctors then built off these theories and began using circumcision to “treat” other illnesses from epilepsy to indigestion. Once circumcision was accepted in the medical community doctors kept coming up with more hypotheses as to what it could cure or prevent, ranging from bed wetting to eye problems to tuberculosis. These hypotheses were proven false, but more were then suggested. This has continued throughout the years until the present time.

In 1934 the Gomco clamp was invented and marketed.  It is estimated that by the 1940’s 75% of boys were circumcised in urban hospitals and infant circumcision was a routine procedure, sometimes even done without parental consent.

In the mid-1940′ a report was released in Britain which found that there were no compelling reasons to circumcise infants and that doing so routinely was actually leading to a number of infant deaths each year, which would have been prevented if the foreskin was left alone. Britain stopped circumcising routinely, yet the practice continued in America.

There was never any valid evidence that this procedure should be carried out on a widespread basis. As far back as 1971 the AAP released a circumcision statement and has since always maintained that circumcision is unnecessary and not recommended.

Circumcision is a cultural tradition ingrained in our society rather than an evidence-based newborn procedure.

Almost all other industrialized countries do not practice infant circumcision. It is not offered as a newborn procedure.

Stayed Tuned for the Risks and Benefits of Circumcision!

Was Circumcision Offered as a Routine Procedure for Your Son? Did You Know that the Foreskin Had so Many Functions?