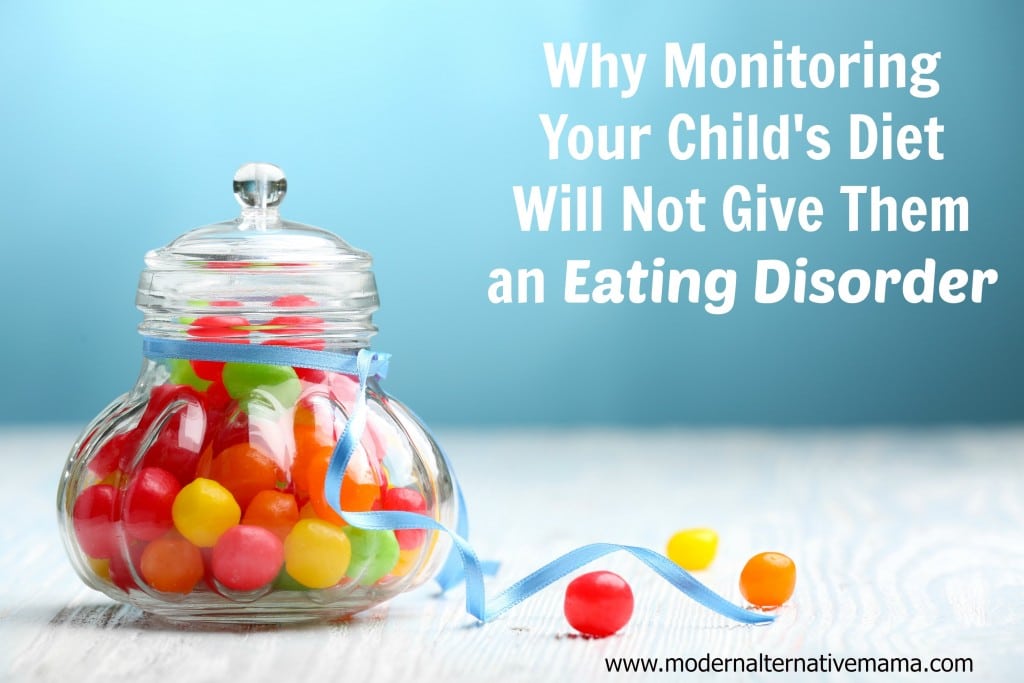 For whatever reason, there is sometimes nothing so controversial as food.

I have had more fights break out on my Facebook page over whether or not toddlers should have lollipops, than over vaccines.  Just think about that, for a minute.  Really think about it.  Over.a.crazy.lollipop.

The thing is, if you post that you don’t let your kids eat (McDonalds/sugar/gluten/food dyes/etc.) then some people will think you are crazy.  They will say that you are ruining your kid’s childhood.  That you are depriving them of an essential experience.  That you are setting them up for massive rebellion later in life, and probably an eating disorder.

It’s even worse now that they’ve defined orthorexia, which is basically healthy eating taken to the extreme.  (Now — if you’re literally obsessed over every single bite you put into your mouth, would rather starve than eat something slightly below your standards, and allow this to consume your life, then yeah, you probably have an eating disorder.  But it’s more likely about control or anxiety than about healthy eating.  Choosing to eat mindfully, at least most of the time, is not a disorder at all.)

At any rate — no.  You will not give your child an eating disorder because you monitor their diet.  Really.

When my kids were smaller — and, this is still true for most of them — they would simply eat whatever they wanted when I wasn’t looking.  If they were in church and were offered a dye-filled bag of fruit snacks, they would take it.  (We do tell the church not to do this, but sometimes new volunteers don’t know.)  They were too young to understand why they shouldn’t eat those.

We simply told them not to, and explained to them why not, and tried to always provide their own healthy snacks instead.  Sometimes they took the church snack even when I brought their own, because…why not.  But, this is actually very typical behavior for small children and not a sign that somehow, your rules are “ruining” them or causing some crazy rebellion.

My 8-year-old now understands the “food rules,” and even knows why.  She’ll tell others what they can and can’t have, and will explain it to them.  She can, and has, said “no” in the face of great temptation.

The point is, all you need to do is teach your kids “why.”

If your kids know why then they can develop their own “food rules” over time.  Many parents allow their kids the occasional “cheat,” and many kids realize that these foods don’t make them feel very well, so they don’t eat them very often.  They learn, for themselves, why some foods are better avoided, or at least enjoyed on special occasions only.

And you absolutely should teach them why.  You should teach them how to make conscientious decisions about their food.  They need to understand what we’re doing, and how it impacts them.  When they do, they will learn to make good choices for themselves (at least most of the time).

Junk Food is Not Essential to Childhood

Many of us have memories of Lik-a-Stik (or whatever that fruit-flavored, tart powder with a white stick candy was called), pixie sticks, kool-aid, McDonald’s Happy Meals, and so on.  Maybe we always made s’mores on the Fourth of July or baked sugar cookies at Christmas.

But those are our memories.  And usually, they’re memories not because of the food itself, but because of what surrounded it.  My friends and I used to eat the candy when we went roller skating on Friday nights — and it was the being out with friends and roller skating (and buying our own snacks) that was a big deal, not the candy.  Or baking cookies…it’s probably because you did it with your parents or grandparents with Christmas music playing and it was the feeling of the season — not the cookies.

Just remember that your child’s memories do not have to reflect your own memories.  You might feel wistful that they aren’t experiencing the things you found special as a child, but they aren’t.  They’ve never done it, so they have no idea.

Create Your Own Food Memories

Of course, no one’s advocating for being so strict with your child’s diet that you never, ever allow any kind of treats.  Who wants to micromanage every bite that goes into their child’s mouth, anyway?  (At least beyond the first 8 – 12 months…I am pretty strict that no one can feed my exclusively breastfed baby anything!)

Enjoy non-sweet foods — maybe your child loves your homemade mac and cheese (comfort food!).  Or maybe it’s roast chicken and mashed potatoes (a meal I loved as a kid).

Or, enjoy the occasional homemade treat.  Healthier cookies, ice pops, muffins, and so on.  There’s no reason that you can’t make these yourself, with good ingredients.

Bottom line, just because your kids don’t eat utter junk food or “mainstream” food does not mean that you are ruining their lives or giving them an eating disorder.  That is plainly silly.

Do you know that you will not give your child an eating disorder if you offer only healthy food?