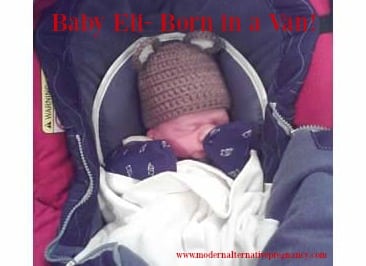 Baby Eli: Born in a Van!

I was 41 + 1 on March 12, 2013 and so very ready to meet my baby.  We had decided to not find out the gender of this new little one and, with two girls already, I just could not wait to find out if I was carrying my first baby boy.  After lunch I had my first actual contraction, not a Braxton-Hicks one like I had been having, but a real true contraction.  I was so excited and was looking forward to getting another in the next ten minutes and finally start my labor.  Well, that was not to be because I did not have another one all afternoon.

It became evening, and we had plans to meet up with some family for dinner.  At the restaurant everyone kept asking me when I was going to have the baby, if I was having any contractions or any other signs that labor might be impending.  After dinner I left annoyed with all the questions.  I was as ready as anyone. Trust me.  My baby just seemed pretty comfortable and everyone else’s guess was as good as mine as to when labor would finally start.

Ironically my contractions started about 10 minutes after we left the restaurant while we were pulling into our driveway at home.  This time they continued, but were mild and 20 minutes apart.  We had our normal evening routine and put the kids to bed.  My husband had men’s Bible study and asked me if I thought he should go.  I said he should because the contractions were so mild and still not close together.

He left for Bible study, and I settled into bed and put on some YouTube videos about using the breast pump and pressure points to encourage along a stalled labor. I really wanted to make this thing happen!  I got out the breast pump and started pumping every four minutes to simulate a labor rhythm. It was totally working!  Every time I would put the pump to my breast for even 30 seconds I would get a contraction.  Then I would wait  four minutes and then repeat.

Soon labor was going on its own even without the pump.  My contractions were still totally manageable, if I practiced the relaxation methods I had learned in my Bradley Childbirth book.

My husband came home from Bible study around 10 and I told him that we were definitely going to be having a baby.  We were planning to go to the birthing center in our area about 30 minutes away.  I still hadn’t reached the “self doubt” sign post that we had learned about in our birth book, so we figured it still wasn’t time to go in.

I even called the midwife and she said that since I was still able to talk through contractions it wasn’t time yet.  Looking back, this is when we should have left the house because I had had my last child naturally and it also progressed very quickly.  But, we did not leave.

I called my mom and gave her the heads up that she might need to come over soon to stay with the other kids, so we could head into the birthing center.  I even offered to bring the kids to her.  (That wasn’t very smart, since they live another 20 minutes further into the country, but I was still in denial about being in labor.) Leaving for the Birth Center

As I was packing my bag, because I knew it was almost time to leave, I had a contraction that I couldn’t relax through and I told my husband “I can’t do this.”  UH OH!  That meant I was in transition.  It happens every time.  No matter how much I practice and prepare I have a moment of self doubt right before it is time to push.

By now, we had called the midwife and told her we were coming in and my mom was on her way to watch the kids.  My husband put some logs into the wood stove and started the van.  He also had his wits about him when he decided to remove the other kids’ car seats.  This proved very helpful, because I needed a nice open backseat for what I was about to do next.

My mom arrived and as I was walking out to get in the van I already knew we were in trouble.  I felt like I needed to go to the bathroom really bad.  I was still in denial. Certainly I couldn’t already be pushing.  But, I remembered that familiar feeling from when I had my daughter naturally and, yes I really was pushing.

We got into the van and I called the midwife and told her I didn’t think we were going to make it.  She told me to lay down and pant.

My husband was blazing down the highway when I saw the blue flashing lights coming up behind us.  We were getting pulled over!  My husband jumped out of the van and yelled at the officer that his wife was having a baby.  Naturally, he couldn’t just take the raving lunatic at his word and he had to shine his flashlight into my window and look at me.  There I was with my water, which had just broken, all over the seat and I was panting and probably looking a little panicked.  He didn’t waste any time before he waved my husband on.  I don’t think he wanted to deliver the baby.

We didn’t get another 5 miles down the highway when three strong pushes brought a crying baby boy into the world.  I reached between his legs and reported to my husband, who was up front driving, “It’s a boy!”  I called my midwife to tell her I didn’t make it but the baby seemed healthy.  I was just happy it was over and I was holding my precious son.

We arrived at the birth center and the midwife came into the van to give us blankets for the baby and make sure neither he nor I needed any immediate assistance.  Since we both looked healthy, she escorted me though the back door into the birthing center.

There I held my baby boy skin to skin and nursed him, while the nurse and midwife looked us both over.  I delivered the placenta and went to the bathroom. They weighed him and he was 8 lb, 7 oz and 22 inches long.

After only being there for about two hours, we were back in the van and heading home.  My husband I looked at each other and wondered, “Did that really just happen?” It felt like a dream.  When My other kids woke up they came in the room and I was holding their new baby brother.

Two years later, in August of 2015, I gave birth to another little boy, but we decided to stay home this time. 🙂

Have you ever had an unusual, or exciting birth?