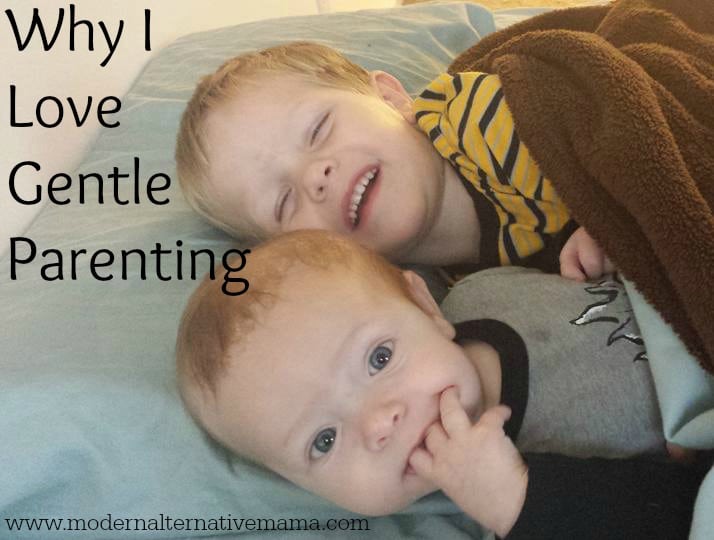 Why I Love Gentle Parenting

Back in early 2011, I started to really read about and try to understand this notion of “gentle parenting.”

I was not convinced.  I thought that children sometimes just needed a spanking, because they had to listen to their parents, and they wouldn’t do it any other way.  Obviously, there were plenty of situations where we didn’t need to do this, many things could be handled with re-direction or timeouts, but sometimes….

Even so, I became more and more convicted that gentle parenting was the way to go.  That it would produce children who were more thoughtful, more empathetic, and engaged in more critical thinking.  Children who would do the right thing not for fear of punishment, but because they knew and valued what the right thing was.

And as a Christian family, I believe that Jesus would advocate for gentleness with children — correcting but not hurting.  (That’s a really long discussion for another post.  But don’t even get me started on ‘the rod’ verses, which are not advocating striking a child.)

We began to move towards a model of gentle parenting.  I felt very lost at times.  The kids tested me a lot.  I got frustrated and spanked them anyway sometimes.  At times, I felt that there was just no way this was going to work.  I didn’t know what to do instead when they just wouldn’t listen.  We struggled through it.

Of course, it didn’t help that they were quite young at the time (I only had two, and they were almost 2 and 3 then).  I didn’t really know what was developmentally appropriate for them, and I often asked too much.

We got through it!

I’m telling you, almost 5 years later and now on the other side of it all, it’s worth it.  Gentle parenting truly is great.

Why I Love Gentle Parenting

The other day, my husband was working out in our garage.  We are finishing it, so that it can serve as an office space for our business.  That means insulation, drywall, lights, the works.

He had hung the drywall the day prior, and was using joint compound to finish the walls.  I don’t know what exactly is in that stuff, but it was making me feel crazy — brain foggy, tired, irritable.

They saw, clearly, that I wasn’t being myself.  They weren’t wrapped up in how I was “being mean” to them (although I probably was, then).  They had empathy and realized that I wasn’t feeling right and that’s why I was yelling at them.  Because I don’t usually yell.  That’s odd in our house.

The thing is, I’m raising future adults.  I’m not raising children, who will remain children.

I think about what memories I want my kids to have.  I think about how I want them to treat others.  About what they will be like, as adults in the real world.  Then I make decisions on how to get there.

They’re still young.  My oldest is almost 8.  But I’m seeing the qualities I like, that I’m aiming for, developing in my older two now.  I overhear them comforting one another if one gets hurt.  I hear them speaking politely to each other.  When they’re with other adults and I’m not present, those other adults compliment me on how polite and helpful they are.

They aren’t perfect.  Nobody is.  But they’re great little people.

It feels like I’m bragging on my kids.  Maybe I am.  But the point is, all this positive parenting stuff that I thought would never work…is working.  My kids trust me.  They come to me and talk to me about anything.  Often, they ask to spend time with me.  They sneak into the room when I’m working and sit with me for a few minutes so they can have a little one-on-one time.  They’ll drop a favorite activity if I pick one to go out somewhere with me alone.  We have a good relationship.  A relationship built on mutual respect.

They still know that I need them to listen if I ask something of them.  But I don’t ask things of them that aren’t important, I don’t demand too much of them, so they generally do listen.  We aren’t adversaries, we’re on the same team — and they know it.

We decided (the adults) recently that our kids need a little break from video games.  It was getting out of hand, some days, with wanting to play for hours, or begging to play incessantly when not playing, and complaining of head and legs hurting when we asked for it to stop.  We had to sit down with one child in particular and talk about why a break was necessary, and how we would get out some toys we hadn’t played with in awhile to have instead.

It wasn’t this big fight.  It wasn’t, “Enough already with the games!  You are grounded from them!”  It wasn’t a big punishment.

No, it was us, being the parents, calmly explaining why the break was necessary and acknowledging the inevitable disappointment, but suggesting activities to do instead.  After the first no-games day, the kid even said to me, “I feel better without games.  I think you shouldn’t let me play, even if I ask.”  We worked together, to problem-solve, but we, as parents, made the ultimate decisions.  We just communicated those decisions respectfully instead of as us-vs-them.

Does It Really Matter?

I know some people are going to read this, and are going to get defensive, and are going to tell me that they parent very differently than I do and that their kids are also happy, healthy, smart, and polite.  They might even credit their success to spanking their children.

I didn’t write this to say that no other parenting method works.  I didn’t write it to judge or shame people who do things differently than I do.  I wrote it to say, positive parenting does work.  It does accomplish those important parenting goals.  It absolutely has been worth it, and amazing, for our family.

I’m sharing a snapshot into another way.  A gentler way.  A positive way.  A way that does produce empathetic, understanding children — and not the “spoiled brats” that we’ve come to fear, as a society, and often attribute to “lack of punishment.”  Those cases happen from parents who don’t care, who don’t parent.  Not from parents who are loving and caring and respectful to their children.

I encourage families who are curious about positive parenting to do some more reading.  Ask more questions.  Meet some families who parent that way and see it in action.  I’d be happy to help with this — please feel free to ask questions in the comments, or send me an email.

I’ve been so very pleased with who my kids are turning into.  I’ve been so happy with the relative peace in our home.  I love that I rarely battle my kids, I don’t spend my days wondering how I will get them to do this, or that, or why they never seem to listen to me.  Those things happen, but they don’t seem to happen as much in my home as in some others (judging by how frequently these questions are asked on parenting forums and websites).  It’s worth it.  It’s brilliant.

Do you practice gentle parenting?