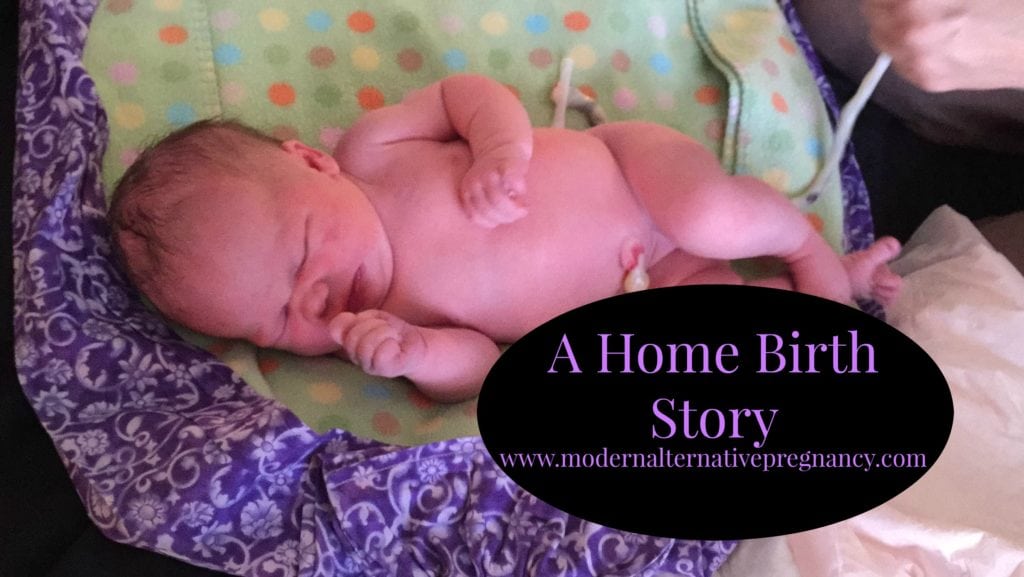 My official estimated due date was on a Thursday (a year ago today!), but since I was 8 days past my EDD with my first child (a hospital birth) the date was just another one on the calendar of this very long pregnancy. I met with my midwife on my due date and we talked about when to call her and I prayed that I wouldn’t see her in her office again without a new baby in my arms!

I had Braxton Hicks contractions since about 27/28 weeks, but for the last 3 weeks I had nightly contractions that were increasing in both intensity and duration, and there was even one night around 38 weeks that I thought for sure I would be holding a baby by morning. But alas, my due date came and went.

On Saturday morning (2 days past my EDD), I got up from breakfast and my husband said I had a wet spot on my pants. Yahoo! I went to the bathroom and noticed a trickle of what appeared to be amniotic fluid. I wasn’t having any contractions, but decided to give my midwife a call anyway. She told me to keep an eye on my fluid, take my temperature every two hours, but otherwise just rest and go about my day. My husband dropped my oldest daughter and I off at a birthday party that morning and went to stock up on groceries and other last minute items. I was very calm all day and even took a good nap in the afternoon to rest up.

Around 5:30p I went to the bathroom and my water broke for real. I could not get over how much there was! I still wasn’t having contractions, but I knew the time was near so spent an hour or so getting my oldest daughter packed up for when my parents would come get her. Before bed I texted my midwife with a status update and was able to sleep for an hour or two before contractions woke me up around 11:00 p.m.

I felt like I wasn’t progressing like I should and the contractions were not moving closer together, so I called my midwife for some advice. She gave me some different positioning techniques to do during contractions since she suspected baby wasn’t in a great position and that was why my contractions were the way they were. For the next hour or so (I lose track of time a bit here!) we did rebozo during contractions alternating with standing against a wall and lifting my belly. Rebozo felt amazing as it really took the pressure off my back and hips, but I feel the standing against the wall is what got her into the best position.

Around 6a I called my parents to come pick up my daughter and shortly after I kept having this overwhelming need for my midwives to be there, so I called my midwives to start making their way over. About 15 minutes after I called the midwives, I entered transition. My parents arrived around this time to get my older daughter, and I was having contractions about every 3 minutes and they were intense.

The assistant midwife arrived around 7:45a as my husband was trying to fill the birth tub and she took one look at me and said “We are past the point of a tub. It is time for a baby!” The lead midwife showed up around this time and I was insistent that I get in the bathtub, so I did while the midwives were frantically covering the bedroom in chux pads.

While I was in the tub I got the urge to push, but knew that due to the angle of the bathtub and the size of our bathroom, that would not be the wisest or safest choice. My husband got me out of the tub and onto the bed where I wailed around some more until my midwife asked if she could check me because we thought there might be a cervical lip since I had been in transition for quite some time but was not yet feeling the urge to push. (In hindsight we later discussed that if I had done some small grunty pushes here, I probably would have realized that I actually was ready to push!)

The midwife checked me and I was so fearful she was going to say I was only 4cm or something else awful, but no! I was complete! This rejuvenated me completely and I said I was going to push on the next contraction. I pushed, on my back in the bed, during one contraction before I realized that was never going to happen again.

I got out of bed and pushed while squatting, resting on one knee and alternating at each contraction. I thought I pushed for hours, y’all. But later, we looked at my midwife’s notes and I pushed for about 28 minutes (it still felt like hours!). But pushing brought such relief from the contractions and once my husband told me he could see baby girl’s hair, I was really encouraged to keep going.

Baby girl was born at 10:08a weighing 9lbs 4oz and 21.5 inches long. It was such an amazing feeling to give birth in our bedroom and after a few minutes, get up and get into bed and just stay there snuggling on our baby, with no interruptions for the next day or two!

I did have a few minor complications that my skilled midwives addressed immediately. I had a slight hemorrhage that my midwife gave me cytotec for and the hemorrhage stopped immediately with no further issue. I also struggled with delivering the placenta which was surprising because I had delivered it quickly after the birth of my first child. I finally had to sit on the toilet and let gravity do the work to help the placenta escape. Otherwise, the birth went beautifully and I am so thrilled by our experience.

Another really great part of having a home birth, is that you don’t have to take the baby out! My midwives did home visits on postpartum days 1, 3, 7, and 14. That was the best! I also loved eating my own food, not having any one come in and check on me while I (or baby!) was trying to sleep, being in a familiar and comfortable environment, and no one touching baby that I didn’t want to be touching baby.

We are blessed to live in a time when home birth is a safe and viable option for both momma and baby.

Do you have your own home birth story?