How Our Family's Life Turned Around - Modern Alternative Mama
AD 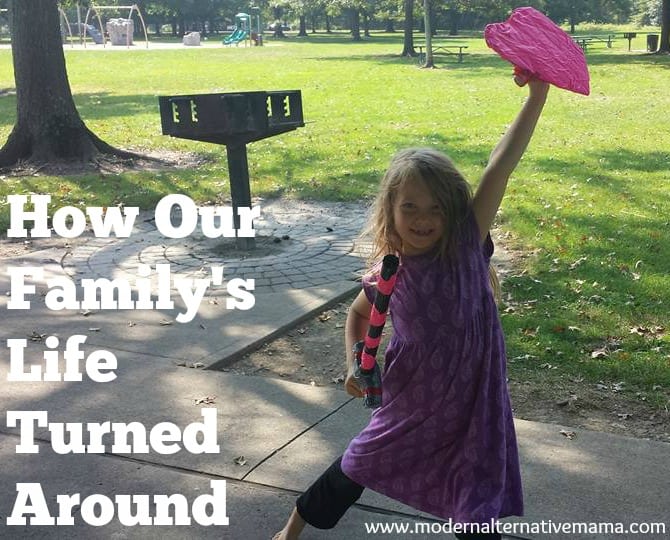 How Our Family’s Life Turned Around

A little while ago, my almost 8-year-old daughter quietly opened my bedroom door and poked her head in.  I was working, and she knew that.  She asked, “Can I help you with anything?”

She silently crossed the room, and took my water bottle to fill for me.  As she was walking back out the door, she said, “Sugar makes me mean and selfish.  I don’t think I should really eat much of it.  I like different things now.  Now, I don’t fight you and I like to help.”  Then she disappeared.

This would have been unheard of only a few weeks ago.  Before we started her on GAPS (which is not working so great for me, but is working great for her, obviously), we were dealing with constant loudness, fighting us on everything, lying to us, sneaking sugar, constantly making messes and refusing to clean up, melting down over small things…just constant problems.

If I showed her something I was planning to buy at the store she might say “Well I hate that, so don’t,” with no understanding that others might want it.  She’d snatch things out of other peoples’ hands, even tackling them to get it, because she wanted it and that was all that mattered.  The behaviors were clearly so developmentally inappropriate…we were all losing it.

And then there was GAPS.

How GAPS Changed Her

This isn’t the first time we did GAPS for her.  The first time, she was 2.  That time, her eczema disappeared, she began talking (she said maybe 5 words at age 2, and a few hundred by 2 1/2), a lot of her food intolerances disappeared.  She was so much better.  But, the behavioral issues never did clear up.

We kept hoping.  We thought if she just grew up a little more, she’d get past the phase.  Maybe it was temporary.

But as time went on, the behaviors were more and more inappropriate for her age.  Our younger kids grew into them, and out of them…and she didn’t.  Then I knew that what we were dealing with was not normal.  It was not going to go away.

It was most frustrating because who she is, outside of those issues, was so wonderful.  She was loving and helpful with her brothers.  So often, she wanted to help us.  She always wanted to give whatever she had to anyone and everyone around her.  She was a leader.  We saw glimpses of these things, and they were so at odds with the tantrums and the screaming and the fighting we often dealt with.

Still, she jumped on board — which was pretty amazing, for a not-quite-8-year-old.  She took it seriously, asking what was and was not allowed on the diet.  She took her supplements willingly.  At her friend’s birthday party, she even chose to avoid the cake and other grains/sugars, sticking to the available fruits and vegetables.  That is some really amazing willpower!  Many adults cannot even do that!

And now, finally, the bad bacteria is dying.  Good bacteria is coming in.  She’s calmer.  The irrational behaviors have disappeared.  She’s herself now.  She’s still opinionated, she’s still a leader, she’s still strong — but she’s healthy.  She feels good.  And it shows.

All I Ever Wanted

I’ve been silently begging and praying for this for so long.  I knew there was so much good in her, but she was struggling physically.  I knew that this was impacting who she was and how she acted.

It was frustrating for all of us.  It sucked up a huge amount of our attention, patience, and everything to help her cope and cope with her.  What she was dealing with affected every single family member.

All I wanted was for her, to be her.  Not reduced to her behaviors, her issues, her “needs.”  Just to see her real personality, to enjoy her for who she was.

We’re finally there.  It’s pretty amazing.  And she sees it.  She gets it now that she’s on the other side of it.  I’m not ‘forcing’ any of this on her, she’s my partner in this.  She wants to feel good.  She likes what this has done for her.

This is working for her.  This is transforming our whole family.

She’ll stay on GAPS, taking increasingly strong probiotics and probiotic foods, for at least another month or so.  At that point, we will assess adding some foods back, one at a time, to see how she feels and if it causes a reaction. We will keep out any foods that do cause a reaction for awhile longer.  We will also continue to limit processed foods more seriously than we did before, and stick primarily to honey for sweet things and avoid sugar.

And, she and I are planning our garden together 🙂  I am so grateful to have her working alongside me, helping me research the seeds, how they should be grown, how much space they’ll need, and more.  She loves math, so she’ll be great at figuring out how big our garden should be and where each plant should go to maximize our space use.  (Though thankfully we have a big, flat, sunny yard, so we have plenty of space!)

And I want to encourage you mamas, who are struggling with a child who has difficulty.  Who is impulsive, or lacks empathy, or has other behavior issues.  There is something you can do.  You can help them get past the issues that cause them to struggle, so you can enjoy them for who they are.  There are ways.

In January, we’ll be starting a series called A Healthier You.  We’ll be working to equip you with the knowledge you need to make real, lasting changes to your family’s health in 2016.  To bring peace to your life.  Please join us for that…I promise we’ll be alongside you the whole way.  Because it’s not an easy journey, but it’s easier and better than continuing to live with problems, feeling poorly day in and day out.

Have you ever experienced an amazing transformation?