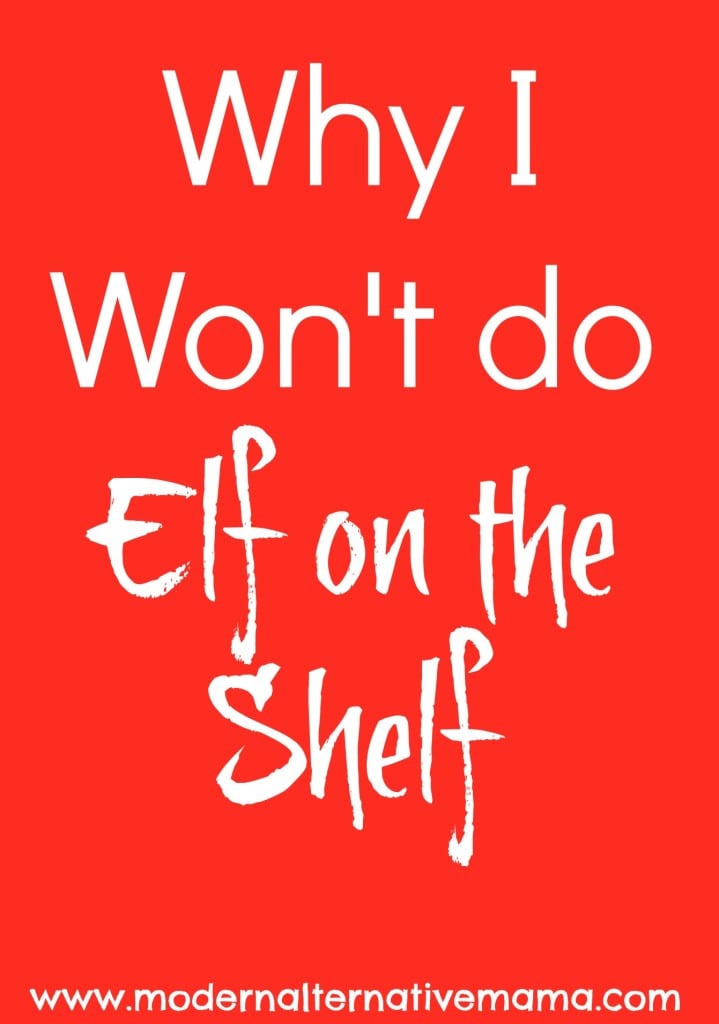 Why I Won’t do Elf on the Shelf

Up until last year, I didn’t really know what “Elf on the Shelf” even was.

Every December, I saw elves posed in cute little mischief and shared online.  I actually thought that was pretty cool — parents posing the elves at night, so the kids could “discover” what the elf had “gotten into” in the morning.  It sounded like a nice little game to play with your kids.  I wasn’t cool enough to do it every day, of course, but it still sounded fun.

Then I learned what “Elf on the Shelf” actually is.

Elf on the Shelf

“Elf on the Shelf” isn’t about cute, fun games.

Apparently, what it’s really about is surveillance.  The idea is that the elf is hidden each night (not necessarily in interesting positions, getting into mischief, but just hidden somewhere). When the kids wake up in the morning, they have to find the elf.  The elf serves as a reminder that Santa is always watching, so they had better be good.  The elf is Santa’s “representative.”

That’s…such a bad idea, on so many levels.

The idea that some authority figure is always watching is not good, especially in this day and age.

Sometimes, there is someone watching.  It’s easier than ever for the government or companies or really anyone to spy on anyone else — thanks to the internet.  Teaching our kids this is normal and good and we should accept the surveillance is problematic.

Plus, it’s creepy.  Who wants an elf (or anything) in their house, that they think is “always watching?”  Not all kids really get the difference between fantasy and reality when they are very young, and may wonder if the elf is real, or could become real, and if it is really watching.  To some kids that’s fun and games; to others, it could truly be scary.

And, worse, teaching them that they ought to obey this authority without question — is dangerous.  We need to be teaching our children to question more, not less.

Be Good Only When Someone’s Watching

A bigger issue, for me, is that this is not at all in line with respectful parenting.

Children need to grow up to learn to do good, to do the right thing, all the time — not just when someone is watching.  Scaring children into “being good” just because someone is watching them and they might get in trouble/lose a privilege is not teaching them true morality.

Over time, children develop a true moral compass, a desire to sort out right from wrong, and do right because it’s right — and not just because they were told to, or might get in trouble if they don’t.  But this takes longer to develop, or doesn’t develop at all if a child is made to think that the reason you should do right, is because of what someone else will do to you if you don’t.  They don’t internalize morality.

Plus, what is “be good” anyway?  Obviously, treating others nicely is being good.  Not destroying property is being good.  But some people also define “being good” as not having tantrums, not yelling or crying, not making messes, etc.  These are things that immature children simply do because they are immature children.  Having standards for them above and beyond what they are capable of is not fair and not helpful.

Finally, “Elf on the Shelf” is part of our unfortunate culture of conditional love.

“I’ll only give you presents if you’re good.”  A gift is something we give because we love someone, regardless of what they do.  They don’t have to earn it.  It’s given freely.  A reward is something we give dependent on specific behavior or actions.  So what is Christmas…gifts, or rewards?

If Christmas is truly about gifts and about love, then Christmas happens no matter what.  Christmas can communicate unconditional love, by offering our children something that we know they’ll enjoy with no strings attached.  By giving to them (and hopefully encouraging them to give to each other), we can teach them what giving truly is.  We can encourage them to give in love, and to receive gratefully.

But when we tie Christmas to behavior or actions, we take away the joy of giving in unconditional love.  We make Christmas conditional.  Christmas is a reward for “being good.”  Then, if they are “good” and they get presents, they have no need to feel gratitude.  They have, after all, “earned” this Christmas and these gifts.  They’ve held up their end of the bargain already; gratitude is not necessary.

If you’re not a Christian, consider the message of peace and unconditional love and how important that is to teach our children.

If you are a Christian, Jesus came for us in unconditional love.  He was the ultimate gift and given even though we didn’t deserve it.  How can we twist His birthday to be a way to control and manipulate our children?  Is that really what He intended?  I think not.

This year, say no to “Elf on the Shelf.”  Make Christmas about joy again, instead of about “who’s watching” and “being good.”  Make Christmas about unconditional love, the surprise of gifts given in love, and gratitude for each gift with sincere thanks to the giver.  Model this for your children, instead of teaching them “someone’s always watching.”

If you like the cute little elf games, then by all means — play.  I still think setting up an elf in silly mischief-type situations for the kids to discover sounds like fun.  As long as there are no strings attached.  It’s just a game to play and enjoy together.  There’s no harm in that.

How do you feel about “Elf on the Shelf?”