Why I Stopped the GAPS Diet |
AD 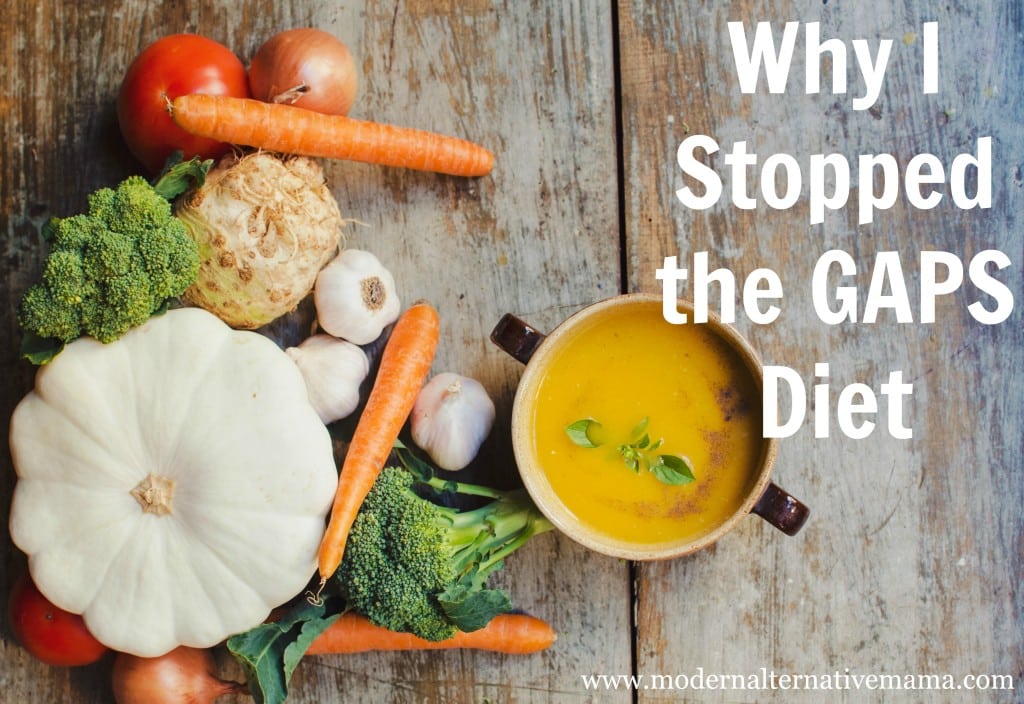 Why I Stopped the GAPS Diet

Over the last few weeks, I’ve been talking about how our family is going (back) on the GAPS diet, and how necessary it is to heal our guts.  It’s been my go-to whenever I’m concerned about gut health, for years now.  (Since early 2010 anyway.)  It’s the most popular and most thorough solution to dealing with gut damage.

But it doesn’t work for everyone.

See, we’re biochemically individuals.  In fact, there was a recent study that came out, proving it!  (See how scientists were shocked that peoples’ bodies don’t react to foods in the same way.)

That means that while GAPS might be amazing for some, it could be a disaster for others.  There’s much more going on than just gut flora.  I’ll tell you my story.

I started GAPS in mid-November after we were settled in our new home.  About a week or so sooner than the rest of the family did, I eased onto the diet.  I let them finish up their grain- and sugar-containing foods (like vanilla yogurt and muffins).

Everything was going okay.  I realized I would need to be careful about carbs since I’m exclusively breastfeeding my 5-month-old.  I solved that by having stuff known to be a belly fat burner like a fruit smoothie or an apple each day, and I felt good.

But, then there was the weekend prior to Thanksgiving.  Things got busy.  I grabbed a salad with grilled shrimp for lunch, and a bowl of soup for dinner.  Sunday was more leftover soup.  I had a smoothie with coconut milk and strawberries, but berries are very low in carbs.

Monday morning, I woke up feeling fine.  After breakfast (bacon and eggs), I felt a little dizzy and strange.  After lunch (ground beef and cauliflower) I felt even more dizzy and weak and a little nauseous.  And after dinner (soup made with tomato puree, stock, onions, and ground beef) I felt really sick and weak.

By Tuesday morning I was so weak I could hardly get up.  I knew it was not some kind of virus because I was still using the bathroom normally.  I was starving, and yet I did not feel like I could eat.

Naturally, I began to do some research.

I learned that what had happened was that my blood sugar had dropped significantly because of the lack of glucose.  When our bodies don’t get enough carbs, they must make glucose from fat and protein (which is possible) through a process called glycolysis.  Not everyone is able to make that conversion easily…and I clearly wasn’t, so with each meal, my blood sugar was dropping lower and I was feeling worse.

The one and only thing I had on Monday that made me feel better, and not worse, was a cup of herbal tea with raw honey.  Glucose.

After this experience, I overall did, and do, feel worse than before starting.

The Problem with GAPS

There are a couple of problems with GAPS.

GAPS is not specifically a low-carb diet.  In fact, if you focus heavily on coconut flour, fruit, honey, and squash, it can even be on the higher-carb side.  But, when you’re on the intro diet (which does not allow most of those things in the early stages), or if you are not paying attention, it is easy to stick to just veggies and meat (plain or in soup form) and end up going low carb.

Many people find themselves falling into a rut with GAPS, where they are lower-carb than is probably good for them.  The lack of energy leads to hormone imbalances, weight gain, anxiety, depression, and other worsening of symptoms.  Some people even find themselves becoming more and more sensitive to foods, rather than less!

Not everyone’s body responds well to low-carb, or to GAPS foods.

Further, messing with the fat/carb/protein ratio can mess with your hormones.  I found my anxiety, which had been under control, spiked terribly.  Hormone balance and anxiety are a couple of my main reasons for doing GAPS, so this was very disheartening.  It seemed like it caused further gut damage as well, which is also the opposite of what I was going for!  (And, high protein diets can really mess with some peoples’ kidneys…so there’s that, too.  Kidneys are an important detox pathway, so this is no small issue.)

Now, some might say, “No, you’re wrong.  That was just die-off.  You need to keep pushing ahead and you will get past it, and then you will be so much better!”

I have done many different detox diets over the last 6 years.  I know what die-off feels like.  And, I was taking regular detox baths and resting and taking all my probiotics (multiple times a day) and plenty of stock and fat.  Sometimes, after taking these, I’d feel very tired and need to rest, and feel mildly ‘off’ for a while — that is die-off.

This “getting worse after every meal” was not.  And, if I’d continued down the path, I’d have been non-functional within a day, and that is not okay when I have a breastfed baby who is relying on me, not to mention four other children and a business to run.  That was not an option.

Plus, there are many stories out there of people who initially feel better on GAPS, and then after weeks or months, begin to get worse again.  This is a “thing” that happens.  Not to everyone — some could live on a paleo/GAPS diet forever and feel great.  But that’s not for everyone.

Grain- and Starch-Free Is Not “Better”

These days, everyone is all into grain-free and starch-free diets.  They say that potatoes and all grains (especially gluten-containing grains) are bad for everyone.  I’ve seen so many articles on this, claiming that no one should eat these foods anymore.

But it’s not true.

Some people happen to react badly to those foods and do better avoiding or limiting them.  Other people need a more balanced approach to their food, with a higher rate of carbs.  No food, especially a whole, unprocessed, organic food, is ever “bad” for everyone.

What matters is what really works for you.  Do you feel stronger?  More energetic?  Healthier?  Then go with it.  If it makes you feel weak, sluggish, foggy, or have other issues, then don’t eat it.  It’s really that simple.

There’s no place for “these are the universal eating rules.”

In fact, some people will find their adrenals crashing and burning, anxiety or depression worsening, and more, because of lack of nutrients and/or lack of fuel (carbs).  That can really set back any form of healing.  And that’s no good at all.

Soon I’ll share what we’ve decided to do next.  Two weeks in, and we haven’t seen any change in anyone’s health.  I have some new ideas, though, so they will come soon.

Have you done GAPS?  Did it work for you?