On Chicken Pox and Society |
AD 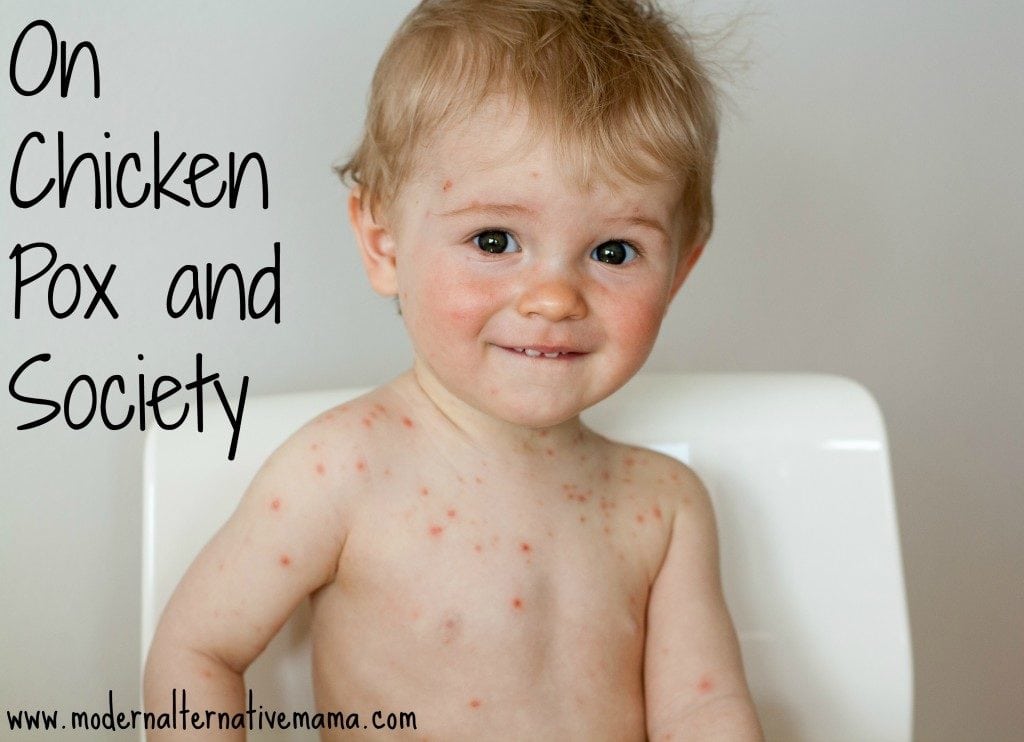 On Chicken Pox and Society A couple weeks ago, my oldest got chicken pox.

Tomorrow, I’ll share the full story with you, on how she did with it and how we treated it naturally.  Today, though, I want to focus on a very different issue.

On Chicken Pox and Society

The last three Sundays, I have had to stay home from church. (and everywhere else.)

The first week, my daughter actually had chicken pox, so we obviously couldn’t go.  (My husband did, because he was serving in ministry, but I stayed home with the kids.)  The second week, my husband and daughter went, as she was over it and safe to go, but I stayed back with the boys because they were still within the incubation period.  They weren’t sick, though, or even likely to be contagious at that point.  Same deal this last Sunday.

I thought about it a lot.  The incubation period of chicken pox is 14 – 17 days.  After the first few days, we could be fairly sure that my boys hadn’t been exposed at the same time as my daughter had, or they would have gotten it quickly.  We knew that they had been exposed to her, obviously.  They weren’t likely to get sick, show any symptoms, or be contagious to others until they were approaching that 14-day mark.  Even so, we kept them home during the entire incubation period.

I knew, especially around the holidays, that others might not be comfortable being around them if there was even a chance they could be contagious.  People did not want their children sick for Thanksgiving.  They did not want to expose their under-a-year babies.  Some with vaccines even noted that they didn’t want to put those vaccines “to the test.”

I listened to that.  And I protected them, by keeping my children home.  I believe that I owe it to society to avoid spreading illness knowingly.

It’s too bad we didn’t and don’t get the same consideration. Going Out in Public Sick…or Vaccinated

We live in a major city.  We are around thousands of different people when we go out to parks, stores, etc.  Many of these people, especially if we’re in a museum with lots of kids, have been recently vaccinated.

The thing is, the varicella shot (chicken pox shot) is a live virus.  It can shed to others and cause infection.  Since wild chicken pox is now so rare, it is very likely that my daughter picked it up from someone who was shedding after vaccination.

Live vaccines (MMR, varicella, rotavirus, FluMist) can shed for up to 21 days after they are given.  Rotavirus actually sheds very easily in feces, so if someone changes a baby’s diaper and doesn’t wash their hands — that happens a lot — they can spread it (it can actually spread up to 28 days).

But no one knows that.  They’re either not told, or they’re lied to and said it doesn’t happen.  They aren’t told that they are a risk to others, especially if they go out around days 4 – 7 after vaccination (those were the highest shedding days, according to some studies I read).  In public, they could come across infants, or those with compromised immune systems.  It just doesn’t even occur to them to stay home.

Worse, some people go out in public sick.  Like, knowing they are sick.  There are people who are legitimately in a tough spot sometimes — have to go to work or risk losing a job, have to go to school or be considered truant, or have to go to the pharmacy/grocery because family has to get medicine or eat.  I know that’s really hard, and I’m not targeting them.

But the people who go to church, to museums, to lessons, to after school clubs and parties — all the fun, optional stuff — while sick.  “Oh, well, he’s hacking up a lung and his nose is running but we just didn’t want to miss out on the fun!”  No.  Irresponsible.

I’m not a germaphobe.  I don’t actually care all that much if my kids are exposed to minor illnesses.  It’s sometimes inconvenient, and oh please, not the stomach bugs….  But, it’s part of life to catch something now and then.  And, it’s part of being in society.  Life isn’t perfect, people do go out when they’re sick (whether they need to or not).

It’s the double standard that is utterly ridiculous.  When my kids got chicken pox, and were in the incubation period, then I kept them home to protect them, and to protect others.  But mostly to protect others.  The vast majority of the time, my kids were not sick, and felt strong and healthy and were begging to be allowed to go out.  (Especially the ones who haven’t gotten it.)

But, others, especially those who vaccinate, are unaware of the impact they can have on others through shedding, and go out all the time.  And, many people go out while sick because they just don’t want to miss out.  They aren’t paying attention to others’ needs.  They don’t care.

So, people who don’t vaccinate are accused of spreading illness.  This family who doesn’t vaccinate is responsible!  But we’re still vilified, for no reason at all.  Meanwhile, everyone else is going out while sick, and spreading illnesses for sure, but that’s okay, because…why?  Because they did what society said and vaccinated, I suppose.

Either we, as a society, need to decide that being exposed to illness sometimes is just something that happens when you live in a group and we accept that; or, we change the way our society works to support people in staying away from society when sick (better leave policies from work/school, options for delivery of meds/food when needed, etc.).

But, we don’t get to have different rules for those who vaccinate and those who don’t.  Everyone must get treated the same.  Someone’s medical decisions aren’t anyone else’s business, anyway.

Have we gotten to the point where we can agree on that?  I don’t feel it’s fair that I’m choosing to quarantine my kids to protect others’ kids, when someone who was likely recently vaccinated didn’t extend me the same courtesy — and that’s why we’re here.  I’d say it’s, oh, exactly like those people who complained in the January measles outbreak that they had to quarantine their kids because of “unvaccinated children” (when in reality most were exposed by vaccinated people who got sick anyway — and none of them developed measles!).

Either we blame everyone…or no one.

I say no one.  Life isn’t perfect, illness happens.  It just does.  I’m really not mad at whoever exposed my kids.  I’m sure they didn’t know.  I’m just mad that they are considered blameless by all, but people have suggested suing parents who don’t vaccinate who even inadvertently expose others.  That is completely and totally and ridiculously unfair.

Don’t forget to come back tomorrow, to discuss what chicken pox is really like, and find out how we treated it naturally!

How do you feel about chicken pox and society and the double standard that exists?