All The Things Happening With Us |
AD 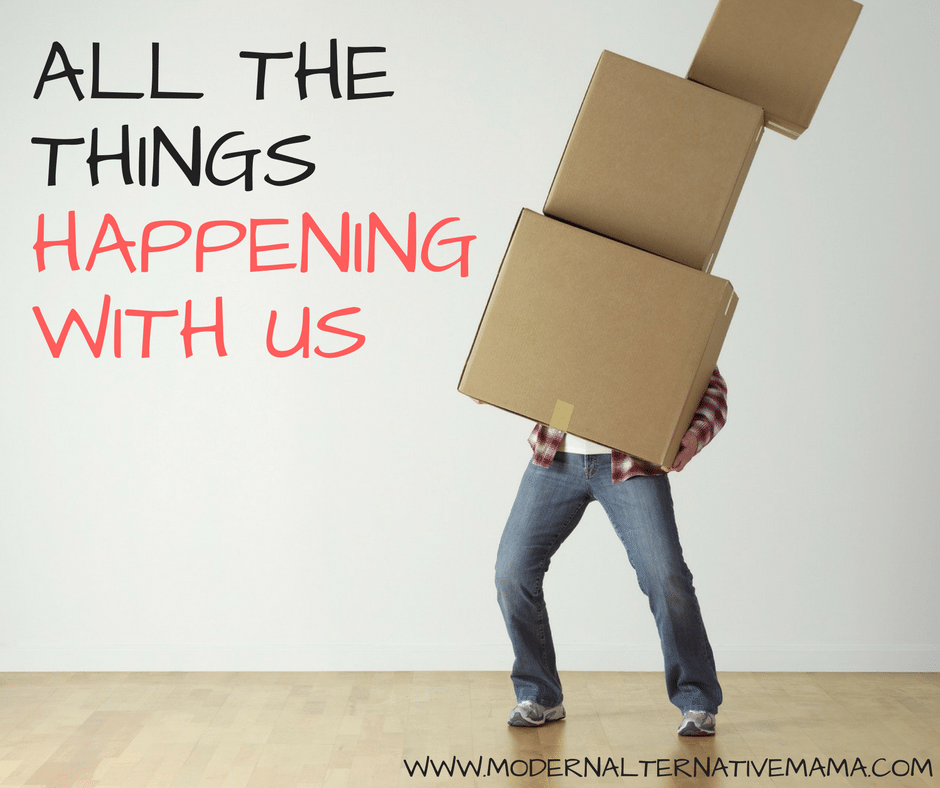 All The Things Happening With Us

Today’s kind of an important day.

See, a lot of things have been happening lately.  A whole lot, actually.  Today, they finally come to some kind of culmination.

It was decided back in July that we needed to move.  We had been living in an 1100-square-foot apartment with 6, and then 7 (after the birth of our youngest in June) people.  There was no garage, no basement, and hardly any storage space anywhere.  It was necessary for a season when we were working to get out of home filled with mold and start over.  We’d needed some place to go quickly that didn’t cost too much.

But, it was starting to get frustrating.  It was small, and without storage. We didn’t really have any of our things there, beyond what we used every day.  The bedrooms were small and barely accommodated the children as they were.  It was time to move on.

It took us quite awhile to find a home that worked for us.  I started looking at the end of July, with the hope of moving mid-September, but by September I still hadn’t found anything.  It was only around the second week of October that I found a good place, and plans were set to move at the end of October.

We had a very busy weekend, as we moved everything!  It’s mostly unpacked now (almost a month later), but we still would like to get more things.  We’ve been scouring Craig’s List for a bigger couch, office furniture (we have a nice little office next to the living room), another set of bunk beds, and so on.  We got lucky, and this new place has a huge, flat, sunny, fenced backyard!  We’ll be able to have a garden here next year, and the kids have plenty of space to play.

We also have a garage and basement once again, so we can store our own stuff.  That’s really nice!  I still have a gas stove here and first-floor laundry room.

We also have four bedrooms instead of three.  We started out with our older boys in one room (they have shared for over two years now), our third boy in his own room (with plans for the baby to join him in a few months), and our daughter in her own room.

After a few weeks, nobody was sleeping well, because our third boy kept playing in his room and turning on his light until it was quite late. Then he was waking up around 2:30 and coming into our room, and getting up for the day between 5:30 and 6.  So, one morning, I hauled his bed into the other boys’ room — much to their mutual delight.  Immediately, there were no more bedtime antics (the 2.5-year-old and 4-year-old go to bed at the same time) and no more middle-of-the-night wakings.  And, when they wake up (between 6:30 and 7), they all head downstairs together, get something to eat, and play quietly.  Awesome.

Early last week, my daughter came to me and pointed towards a small sore on her face.  I assumed she’d scraped herself while rough-housing with her brothers (because that happens a lot).  She hadn’t.  Then I thought it was probably eczema…which is strange, because she hasn’t had eczema in years.

Well, we had already planned to go on GAPS.  That was decided around the time we moved, maybe slightly before.  It was clear that she needed it.

It’s been an interesting challenge, planning GAPS this time.  The last time we did it (as a whole family), we had two kids, and they were newly 2 and 6 months old.  It was pretty easy — “this is what you eat now.”  They really had little idea about other options and didn’t have friends outside the family yet.

But now, the kids are almost 8, 6, 4, 2.5, and 5 months.  The older four are certainly aware of “other” food!  We’ve talked to them quite a bit about why we’re doing it, what it means, how it will help us, and so on.  They are aware of good and bad bacteria, that sugar and grains feed the bad bacteria, that the bad bacteria can make them sick, and that we are going to heal their guts and add good bacteria.  They know it is only temporary.  We played a game, naming off foods we can and can’t have on the diet.  They thought most of the ‘can’ foods were pretty yummy.  Hopefully they’ll be ready for this!

I think that, since we are just doing a “tune up” of sorts, that it will only take a couple of months to see significant healing for everyone.  We will re-assess every couple of weeks to see if we have accomplished specific goals (which include getting rid of eczema, acne, starting weight loss, improving some behavioral issues, and other things for my husband).  At some point, we will re-introduce traditional sourdough bread.

Yes, this takes us on GAPS through the holidays.  Various people have tried to point out to me that this may be difficult while we are traveling, or supposed to be enjoying holiday goodies.  I have said that there will always be an excuse not to do it…so we will just go ahead now.  It makes sense with the rest of the timing.

This week is extra special.

It’s special in an unexpected way because the kids are now quarantined — one has chicken pox.  (More on that in a couple weeks.)  Ironic that it happened now, really.

Why?  This was my husband’s very last week at work.  As of today, he is done, and we are full-time entrepreneurs and home-based business owners.

We have been in a transition phase over the last few weeks.  I’ve spent more time working, and he’s spent more time taking care of the kids and the home.  He was still at work — but somewhat less involved — as the person who is taking over for him started two weeks ago and he has been in a training/supervisory role rather than being the primary person in charge.  It has meant he’s worked closer to 40 hours a week, instead of the 50 – 60 that was not uncommon before.

It still doesn’t feel real.  Maybe it will next Monday, when he doesn’t go to work.  Maybe it’ll take a few weeks, until after the holidays are over and we adjust to the new schedule.  It’ll be weird to be working so much.  But, it’s also really nice to know that I can work from home and take breaks to be with my babies, and that they are with my husband while I am working.

Definitely a lot going on here! 🙂

What’s been going on in your life lately?