Why I’m Raising My Kids in the Church |
AD 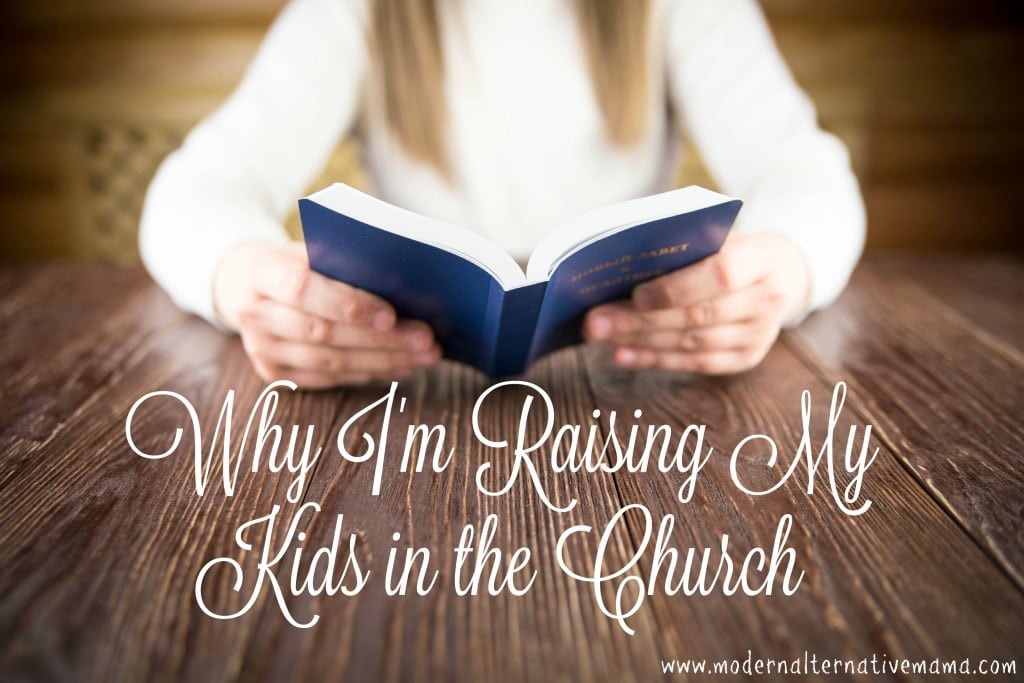 Why I’m Raising My Kids in the Church

This isn’t my usual MO around here…I don’t discuss religion too much.

I know it’s controversial.  I’ve had people who’ve followed me and enjoyed my health posts for weeks or months, run across a religious-themed post and immediately unfollow me because they just couldn’t get their health information from someone who also spoke on religion.

The popular view of religion right now is that it’s basically just brainwashing for people who are too stupid to realize it is a bunch of magical fairy tales about a man in the sky.  (And this type of rhetoric comes from people who claim to be ‘tolerant.’  It isn’t tolerant if you only support or defend viewpoints you like or agree with.)

I have spent over a year reading everything I can about this anti-religion view.  I have examined the problems with faith.  It has been uncomfortable, at times, to challenge assertions, or to even go to church when I could see so many issues coming to light.

But I kept looking.  I kept searching.  And I’ve affirmed that yes, — I do want to raise my children in the church.

Why I’m Raising My Kids in the Church

Between religious and non-religious people (as a very broad group) there are differences that go far beyond just what they believe about God.

I’ve noted characteristics of each group that seem to be true.  Again, I’m painting with a very broad brush here and not speaking about any individuals.

Those who don’t believe:

I see clear good and bad in both groups.

The non-believers often tend to be more accepting of others, and do not necessarily judge people for the choices they make or what they do (unless it’s religion).  Their version of morality often leads to a more open mind on a variety of subjects, and more open exploration of a wide variety of topics.  But.  They also tend to engage in a lot more drinking, swearing, and sex outside marriage.  I also see a very abrasive way of speaking that is common, as well as a whole lot of intellectual superiority.

The believers tend to be very accepting of other believers, and certain communities are truly accepting of all.  They avoid, as much as possible, being drunk and promiscuity (some swear, some don’t, but most try not to swear in front of children).  They create lots of charitable programs, donating food, time, and a whole lot more to people in need all over the world, and in their own communities.  There are groups who engage in legalism, turning people away from their churches when the women wear pants (really), or if they drink alcohol, or get divorced, or….  You get the picture.

Look, there are problems with religion.  Well, more accurately, there are problems with people who are religious.  Because, guess what, they’re flawed.  They mess up.  They ignore God’s word and create legalistic systems that are filled with people who don’t love others, who gossip, who drive away the masses from churches because people don’t want to show up to be judged and pushed aside.  I’m calling those churches out, right now…it’s not okay.

But, we don’t throw the baby out with the bath water.  We don’t walk away from religion because of a few flawed people who screwed it up.  There is good and bad in every belief system, and people who do both in every community or group.  That doesn’t make the whole group bad; it makes the actions of the few, wrong.

Change From the Inside Out

But when it comes down to it, I’ve found more good than bad in the church.  I’ve seen Jesus inspire people to be more loving, kinder, more generous.  I’ve seen people try to accept others for who they are (even if they have annoying personality quirks) because that is what Jesus would do.  I’ve seen people work together to help those in need, locally and internationally.

Now — I’m lucky.  I’ve found a great church, where we belong.  Where I’ve never seen drama or issues.  Where I know if we ask for help, plenty will step up (and they will actually want to help, it’s not begrudgingly).  This is a church where they speak against legalism.  Where they practice being accepting of others.  Where they hold a firm line on gospel truths, but they don’t cast people out for being sinners.  (And, many of them live like us in other ways — big families, natural births, full-term breastfeeding, natural remedies, real food, and so on — many see these as God’s design as we do.)

I want my family to be surrounded by this loving, giving community, who believe what we believe.

Where there’s need for change, because there is, we’ll call it out, and we’ll change it from the inside.  People who are “playing church” and are engaged in unBiblical practices will have to answer for that.  I’m not afraid to say something, if it’s serious (like abusing little boys).  It does the church no good to hide the wrong to protect itself — that will destroy it.

Too many people see a profession of faith and immediately write the person off as stupid, brainwashed, unable to engage in critical thinking.  That is a mistake.  There are many, many intelligent people in the church.  (And not-so-intelligent people everywhere.  Intelligence doesn’t make you a good or bad person, either.)

If your reaction to this post is to write me and my family off, I ask you why?  We believe differently than you do.  We aren’t telling you that you have to believe what we do.  But it isn’t blind.  It’s a careful choice.

Surround yourself with the community that makes the most sense to you.  I choose the church.

Are you raising your kids in the church?  Why or why not?