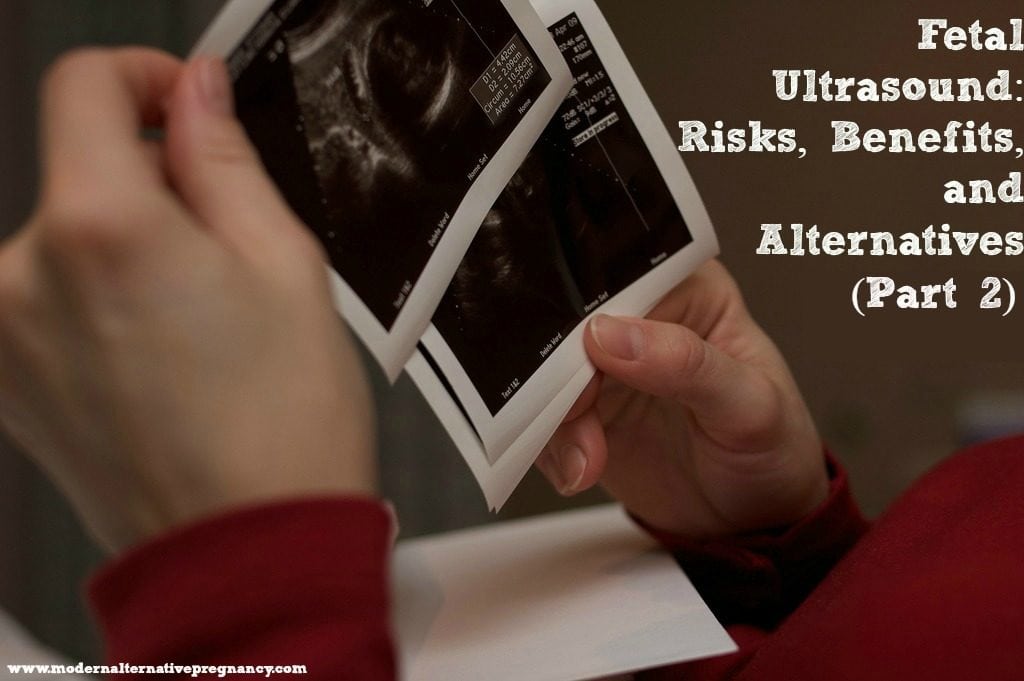 Part I of this series briefly explained the process of fetal ultrasound scanning and examined the potential risks identified to date. Part II will summarize potential benefits which may outweigh those risks in certain circumstances, and present several alternatives providing much of the information sought in routine scans.

What are the Potential Benefits of Fetal Ultrasound?

–  Turning a baby in breech position via external version

Other Improved Outcomes Are Rare

Many pregnant mothers and healthcare providers assume that early diagnosis of any serious condition automatically improves the outcome for mothers and infants. Interestingly, this is not usually the case even for severe complications. For instance, a Norwegian study found that in babies with abdominal wall defects, the diagnosed group of babies received surgery hours before the undiagnosed group,  but the results for both groups were identical, with no mortalities.

Ultrasound detection of serious birth defects varies widely in accuracy, ranging from 13-85%, and false positive diagnoses are not uncommon. While certain rare conditions such as sacrococcygeal tumor, bladder obstructions, and twin-to-twin transfusion syndrome may now be treated with prenatal surgery,  these procedures are sporadically available and risky – as of 2012, prenatal surgery presented a 50% mortality risk. Ultimately, early and accurate detection leading to drastic interventions for these conditions did not statistically improve outcomes. These findings suggest that the powerful benefits of uncomplicated vaginal delivery as well as bonding, skin-to-skin contact, and breastfeeding immediately after birth may offset delays in diagnosis and treatment of even the most profoundly serious conditions.

In fact, two broad-based and widely referenced studies have been conducted to evaluate the impact of fetal ultrasound in overall outcomes. In 1993 and again in 2010, researchers found that routine fetal ultrasound failed to provide substantial benefit to mothers and babies.

What are the Alternatives to Ultrasound?

Pregnant women concerned about the potential risks of ultrasound may still want the reassurance of information traditionally provided by routine scanning.

Women at risk for early miscarriage might choose fertility charting, and specifically tracking their basal body temperature, to assess whether a miscarriage is imminent during the first weeks of pregnancy.

Expectant mothers compelled to know the sex of their fetus or identify possible chromosomal abnormalities now may do so in the first trimester with only a blood draw, as relatively new tests are sensitive enough to detect fetal DNA in a maternal blood sample with about 98% accuracy.

Skilled midwives and other healthcare practitioners are trained to use non-invasive procedures and tools, such as the pinard horn for use in monitoring fetal heart rate. Measurement of fundal height is as effective as ultrasound in monitoring normal fetal growth rate throughout pregnancy, and experienced practitioners can very accurately determine fetal position during the third trimester of pregnancy.

The decision to undergo one or more ultrasound scans belongs with pregnant mothers and their partners. While routine scanning is often presented by healthcare providers as the predominant standard of prenatal care, no significant evidence indicates that these scans are necessarily beneficial – and a growing body of evidence indicates potential risks. Every pregnant mother has the right to accept or refuse the procedure whenever it is recommended, and she should be fully informed of risks and alternatives.

When providers recommend medical ultrasound scans for pregnant patients, those recommendations should be based on concrete evidence that the diagnosis sought via ultrasound has demonstrably improved outcomes – and patients should feel perfectly comfortable asking for that evidence when scans are suggested. Ultimately it is the expectant mother who must live with the consequences, either positive or negative, of every procedure and resulting intervention she receives – and no one is more invested in the health and well-being of her baby.

What Are Your Thoughts On Fetal Ultrasound?