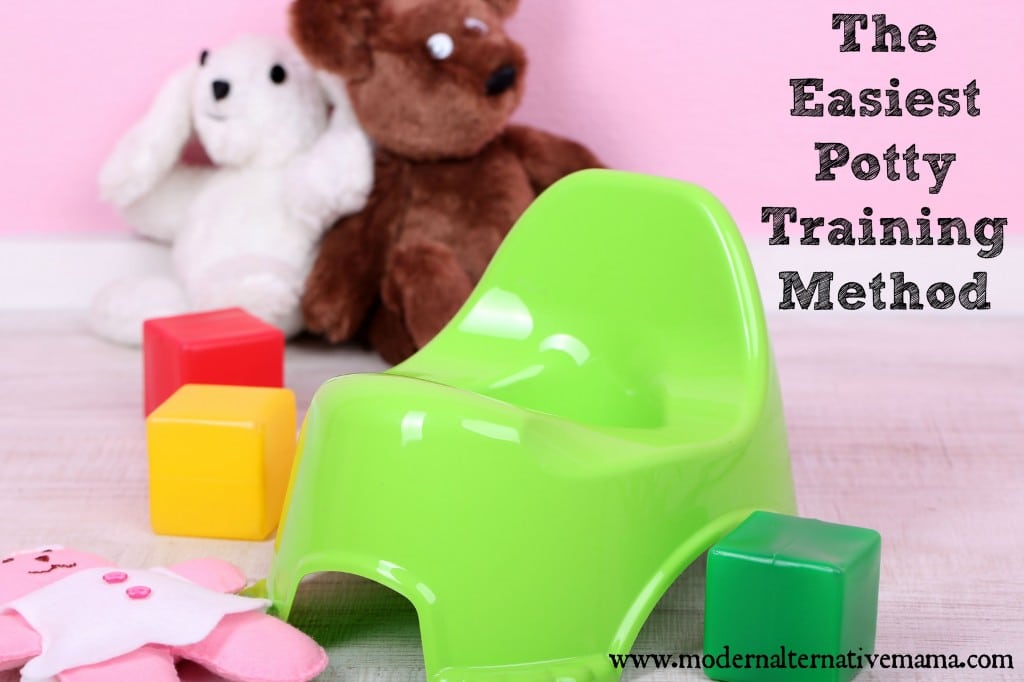 Right now, I’m holding breath as I’m about to say this, for fear that as soon as I do, it will not be true any longer:

I think my two-year-old is potty trained.

He’s become increasingly reliable about going during the day as long as he’s naked, and has had fewer and fewer accidents (and fewer incidents of peeing on the floor on purpose because he thinks it’s funny — thankfully he almost always does it in the kitchen where it’s easy to clean).  Then this week we went to the park for three hours, and I put a diaper on him because I didn’t think he’d remember to go with clothes on, while having fun.  But when we got home, he was dry, and immediately went potty.

Dare I hope?  He’s not even two-and-a-half yet.

Anyway, he’s the fourth kid I’ve trained with the same method.  I’ve gotten more adept with it each time, and it’s been easier each time.  And they’ve trained a bit earlier each time, too.  (Except my girl — she trained super fast at 2.5, but of my boys.)  This works.  And it is oh-so-easy.  Really.

I can’t even really call this a method, per se.  It’s that easy.

A lot of moms work way too hard at potty training (in my opinion).  They come up with rewards charts, set timers, take their kids to the bathroom every 10 or 20 minutes, sit and watch their kids, get frustrated when things go poorly for days or weeks, get more frustrated when kids regress….

I’ve never done any of that.

First, I don’t believe in rewards for potty training (or most other things).  Potty training is a skill that children will learn when they are physically capable of it.  The true “reward” is a feeling of accomplishment, and having dry/clean pants.  External rewards send the wrong message, leading kids to focus on “getting something” instead of achieving a new skill.  It also makes them “perform” only for these rewards.  Some kids will deliberately go several times, squeezing out a few drops of pee just to get the reward.  Some will start having accidents once there is no more reward.  That’s just training them to perform for the reward, instead of listening to their own bodies and using the toilet when they need to.

The only “reward” we have ever offered is new underwear and using the toilet paper — since these are things all people who use the toilet have/use.  But, it was “If you choose to use the potty, then you may wear underwear.  If you don’t want to, then you can wear a diaper.”  It was always a choice and not a bribe.

Being naked was a key part of this process.  Kids need to make the connection to what happens when they pee.  First, they will realize after that they made the puddle on the floor.  Then, they will look down and realize they are peeing.  We usually saw these first steps at bath time between 1 and 2 years old.

After awhile, they’ll realize they are about to pee.  Soon after, they’ll realize they can actually go potty when they need to pee (and later, poop too).  It’s important to be naked, because at first, most kids will simply not think about it when dressed, and will pee their pants.  They don’t remember they don’t have a diaper on.  It usually takes just a few weeks after they are reliable naked before they will be mostly reliable when dressed.

We leave potty training kids naked at home as much as possible.

For my oldest, we had a little potty in the playroom.  It was hardest for her because she didn’t really have kids to observe — only adults.  We asked her little friends’ parents if she could observe them sometimes.  Once she understood, training only took a few days.  Our boys really didn’t use a little potty; we had a seat for the big toilet instead.  All the kids quickly moved to using the big toilet, with or without the seat — they straddled the toilet way at the back.  The boys learned to stand pretty quickly, basically as soon as they were tall enough.

Anyway, make sure the bathroom door is open so they can get in as needed, or that a potty is in their play area — whatever you choose needs to be accessible.

This is the most important part — ignore them.

You can suggest now and then that they might want to go.  You can tell them peeing on the floor isn’t a choice, so if they don’t want to go potty they can put on a diaper (don’t make a big deal out of which choice they make).  You can ask them to come with you when you go.

Of course, if they head for the bathroom, or ask you to take them, you do!  Stay as hands-off as possible, helping only if they ask you to.  It needs to be fully child-led.

Some will train with no warning — literally wake up one morning and announce they no longer wear diapers.  Some will go back and forth for months.  Most will get it in a few weeks.  It does not matter a bit if they go back and forth from using the potty and wearing diapers.  This will not confuse them; it just means they’re not fully ready to use the potty all the time.  They will get there, though.

(I used to think it mattered if they ‘went backward’ and that we had to keep pushing ahead.  My oldest son took much longer to train than my younger two boys because I made it more of a battle than it needed to be.  I’ve literally ignored my third boy unless he asked for help and he’s learned the fastest.)

The Beauty of It All

This method has many advantages.

My fourth decided he wanted to learn to use the potty a week or so before his little brother was born.  Everyone said “No!  Don’t do that now!  He’ll regress anyway.”  He didn’t because it was about him, not me.  He’s made fairly steady progress even right when his brother was born.  It just didn’t matter to him.  It wasn’t our idea, we didn’t push him, we weren’t the ones ‘training’ him.  He felt like it, so he did.  And if he had decided that he didn’t want to go when his brother was brand new, we wouldn’t have considered it regression, we would have just put a diaper on him and ignored it until he decided to try again.

Using the potty should not be a big deal.  A quiet word of “Good job!” is all that’s needed.  Don’t see it as a milestone that has to happen at a certain age, or compare your child to other children.  All typical children will train between 1 and 4 years of age.

If your child is on the older end of this range and still not doing well, it could be because of making it a battle.  Or, it could be a physical issue — food allergies or misaligned spines can contribute to accidents.  Both my oldest two boys had accidents at times after they were trained, but after they were adjusted by the chiropractor, it would immediately stop.  (And the chiro told me their little hips/low backs were out of alignment, often a lot — once, my oldest son even cried about his back hurting and couldn’t sleep.)

At any rate.  Be laid back.  Offer them a judgment-free choice.  Make the potty available.  Leave them naked.  And wait.  They will do it when they are ready.  I promise.  I’ve potty trained four, three of whom are boys! 🙂

Psst!  My brand-new book, “Natural Remedies for Kids,” is coming out in August!  When you pre-order it, you get up to 25% off — plus, some amazing bonus offers (details coming soon).  It’s the best book for learning to use simple, natural remedies with your family (the one I wish I’d had when I was just getting started).  Get the details on the book here.

How do you potty train your kids?