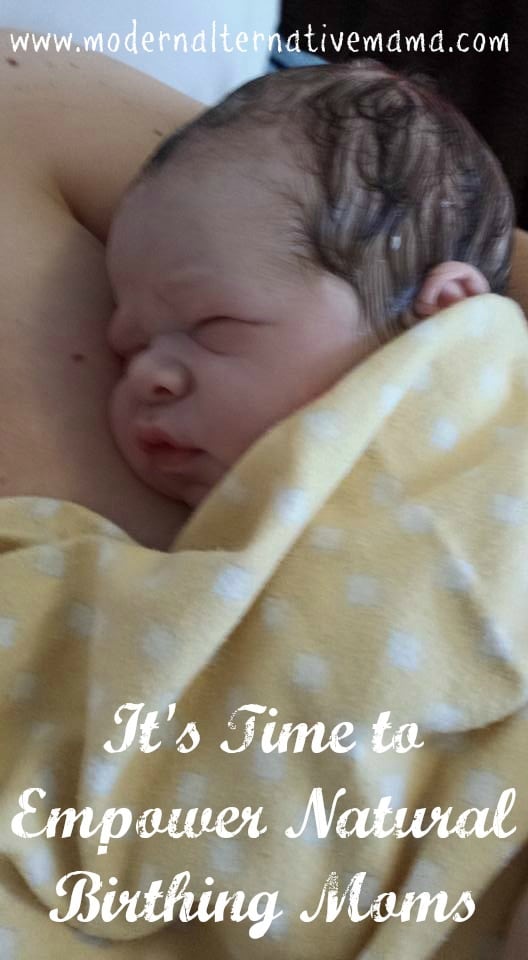 A couple days ago, I shared my fifth baby’s home birth story.  It’s been a popular read, probably because this birth was unlike what I have experienced before.  I thought I knew how birth worked, for my body, after having three babies naturally and at home.  This birth threw me for a loop.  It was the hardest birth I have yet experienced, and it required me to do things very differently than I ever have before.

I feel the need to write a follow-up, though.  Because there’s the birth itself, but then there are my thoughts about it all.  It was hard.  And while I was going through it, I thought, I understand why women want the drugs.  I don’t want to do this again.

But after?  After, I felt so grateful it happened the way it did.  I felt so grateful that I was at home.  That I had the chance to work with my body and make birth happen the way it was supposed to.  And honestly?  I felt sorry for the women who didn’t get to experience this, primarily because of the lies they’ve been told about birth.  It made me think that the hospital, and the way it often works, is not really a good situation for many women.

Why This Birth Was Hard

This birth was hard because the baby was bigger — primarily because he had a big head.  Weight isn’t usually such an issue because the fat on a baby is easy to deal with, but the larger bone structure of the head, well…not as much.

What this meant was that I needed to work with my body and my baby in order for birth to occur.  He wasn’t putting enough pressure on my cervix to move down when I was reclining in any position, and it really wasn’t helping his position, either.  (Reclining encourages babies to be posterior sometimes.)

My instincts told me strongly that I needed to be upright, on my hands and knees, or standing — I needed to somehow “make room” in my body for him.  When I followed this, he did indeed move down, and I did dilate.

At home, I had the freedom to change positions and try some interesting things.  I stayed on my hands and knees a lot, at first with counter-pressure on my back to help him move down.  Once he was far enough down, counter-pressure made my back hurt instead of helping, and eventually being on my hands and knees made my back hurt too.  That was when I needed to stand up so that the straight downward pressure would cause dilation.  And it did, and he was born.

By following my instincts and working with my body and my baby, I was able to give birth naturally and safely.

If I’d Been in a Hospital….

Unfortunately, based on my one hospital experience, this would have gone very poorly if I’d been in a hospital.

I likely would not have been able to be up and moving very much.  I would have been in bed, being monitored.  (Now — some hospitals are natural-birth-friendly and would encourage being upright and moving, in which case it would have been fine.  But that wasn’t my experience when I was in the hospital, and it isn’t many women’s experience.)  The baby would not have moved down while I was in that position, fighting against gravity and making my pelvic entry smaller by sitting.

This likely would have led to a cascade of interventions — Pitocin, an epidural, breaking my water (which could have led to cord prolapse if the baby was still high), and if things still didn’t progress, a c-section.

None of that was necessary.

Birth isn’t a passive thing.  It can be, much like my fourth baby’s birth was.  I pretty much laid on my back in a birthing tub and waited for him to be ready to come out.  (He was smaller.)  But that’s what my instincts told me I needed for him.  I even tried to get upright on my hands and knees and immediately knew it was wrong, that time.  Yet, I needed to be upright with my third and fifth babies, because they were bigger.

Rather, birth is about the interaction between mom and baby.  Mom needs a chance to get down inside herself, to think about what her body and her baby need, to follow her instincts.  Barring complications, most babies can be born naturally when the mom is allowed to go through this process without interference.

It’s just that moms are told they don’t get it.  They don’t know how to birth.  They need some professional to tell them how it’s supposed to work.  They are told to ignore their instincts, and might even be afraid to follow them.  They submit to intervention after intervention, which increases the risk to them and to their babies, often without benefit.  All they would need, in many cases, is to have people surrounding them who trust them and trust birth.

(That’s not to say that true warning signs should be ignored, or that there’s no place for escalating interventions.  There is.  But not nearly at the rate that it occurs.)

We’re having worse outcomes because we’re afraid of the “what ifs” and we aren’t trusting women.

Why It Doesn’t Make Sense

When I shared my birth story, I had someone — a troll, clearly — comment on it.  I’m quoting the person, anonymously, below because I want to address this.  I think that this way of thinking is all too pervasive and it’s why so many women are bullied into interventions they don’t really need.

“Wow, Kate.  I now realize what lengths NCB zealots will go, to keep the fantasy narrative alive. What you wrote here, isn’t quite the same as your laments you wrote on Facebook: Third/ Fourth-degree tears that resulted in groin muscle pain 8 days PP.  I thought women just “knew” how to birth?  I guess if you talked about your horrendous injury, that would contradict the pretty smile the NCB industry is holding.  Oh well. Do your Kegels religiously and smile! Everything’s swell in here!”

So let’s just break that down.

I mentioned in my birth story that I did tear.  It wasn’t, however, third/fourth degree, it was more like first/second and it healed by itself in about a week.  It’s perfectly fine now.  I had asked in a private group (where the troll was clearly stalking me) for stories from people who had tears that they opted not to get repaired.  It was apparently assumed it was worse than it really was.

But what was the other option?  To get the tear repaired by transferring to the hospital?  This would have placed me and baby at risk from the germs in the hospital.  I had a tear repair with my first baby, and it hurt badly for at least three weeks.  It was hard to sit.  And of course, it wasn’t as strong and tore easily in my future births (I don’t fully know which, because it was a gradual thing, but I know the repaired area is no longer “repaired” and it happened prior to this last birth).

But sure, that would have been better than a tear that healed on its own in less than a week.

The groin injury.  With both of my biggest babies, I strained a groin muscle that was sore for several days after birth.  But this resolved in a little over a week.  By two weeks postpartum, I felt just fine and strong.  I have been seeing a chiropractor to help get my hips and sacrum (lowest part of my spine) back in the correct position after birth, which helps the muscles go back too.  Yes, it was painful for a few days.  Yes, it meant I needed to rest more and not carry heavy things for a few days.

People who do not support natural birth do not think about these things critically.  Natural birth is messy and imperfect, and it can result in tears, and muscle strains, and things of this nature.  It’s like an athletic event, in a sense!  It’s not going to be this amazing, orgasmic experience that leaves you unscarred and unscathed and ready to run a marathon the next day.  It’s birth, and it’s big.  And it’s incredibly important to rest after birth, to allow your body the time it needs to heal, whether you’ve been “injured” or not.

These minor injuries are less likely if you trust your body and work with it, but not completely escapable, depending on the position of the baby, the size of the baby, the length of labor, how quickly baby comes at the end, etc.

But.  They are preferable, in most cases, to the escalating interventions that a woman would face in the hospital.  They are preferable to drugs, episiotomies, tears in the lithotomy position, and c-sections.  Those are all much harder to recover from, a much bigger deal, and have much longer, lasting impacts on mom and baby.

Natural birth isn’t a fantasy.  But for most moms and babies the ultimate outcome, in the short- and long-term, is better.

While there are some excellent hospitals and doctors out there, our system as a whole is broken and does not support or even understand natural birth anymore.  We have people who look at a successful birth, one that it only takes a couple weeks to recover from physically, and say it should have had interventions to avoid that “recovery” time…without actually, realistically comparing the outcomes of the natural birth and the intervention-filled birth!  (And since my baby was perfect after our natural birth, I can guarantee that his outcome would have been worse with interventions.  Why would I do that?)

We need to understand natural birth.  We need to empower women to choose it, when they want to.  We need to teach them how it really works, that it’s not always easy, but it is worth it.  It really is.

And no.  There’s no “NCB Industry.”  (NCB = Natural Child Birth.)  We’re just a collection of moms who are sharing our stories, in hopes of inspiring and empowering others to do what they’re made to do.

Do you think we need to empower natural birthing moms?