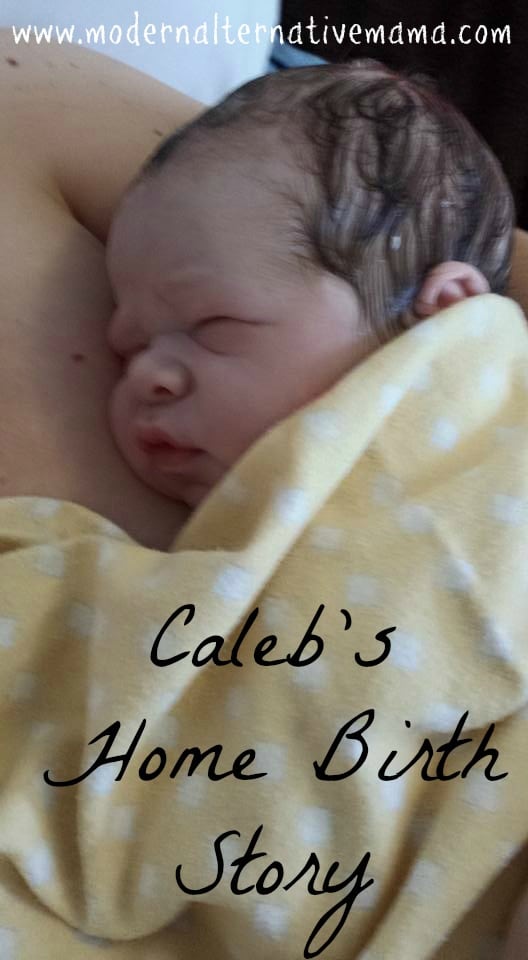 Caleb is our fourth boy and fourth home birth, and our fifth child.  Our oldest remains our only girl!

With my first three home births, I found the “way” that things worked for me and went with it.  I knew what to expect from birth and what to do to cope while it occurred.  It was mostly about dealing with the birth while it happened to me.

But not this time.

Everything I “knew” about birth and how things usually go just wasn’t working.  I could not sit back and try to relax and allow it to happen.  I had to be active and working in order to get the baby out.  And it took much longer than I had thought it would.  (But it wasn’t really that long.)  It was a totally different experience.

The final week of pregnancy ended up being kind of rough, because I was so tired and just didn’t quite feel well.  But the night before he was born, I just felt sick and exhausted and I wanted to go to bed.

I slept fitfully all night, getting up several times to use the bathroom, having lots of strange dreams.  Then, right about 4:30, a contraction came and I immediately knew it was “real.”  I waited through two more that were close together (about 2 – 4 min. apart) before getting up and waking my husband — “It’s baby time.”

He quickly got up and started getting things ready — cleaning our room and the downstairs, finding the midwives’ phone numbers and calling them.  I still felt sick and went in the bathroom for awhile, and then got into the tub.  My plan was to labor in a semi-upright position in the tub with a towel over my belly.

After 30 or 40 minutes, I realized that this was not helping at all.  The contractions varied in strength and frequency, but I wasn’t making any progress.  I suspected that I would need to get out and do something else.

Alone in the room, I climbed out of the tub and went to lean over the edge of my bed as I knelt on the floor.  This more upright position was much more effective and I began to see bloody show, indicating some progress!  That was encouraging.

Then my husband and the midwives came in and I began talking to them (I could still talk through contractions mostly) and sitting upright on the bed.  This also resulted in no progress, so I asked the midwives to leave the room for awhile and I got back on my knees on the floor and had my husband do counter-pressure on my low back.

The baby began to move down.  For whatever reason, I don’t dilate until baby has moved down significantly — it’s been true with every baby.  I was going back and forth between the toilet and kneeling on the floor — both of these were effective places for contractions.

I still wanted to try the tub and hoped that there would come a point where baby would have moved down enough that I could get in and let things happen.  I tried to get in two or three more times, and tried to get in different positions, but each time quickly realized the tub was not going to work.  I needed to be upright, and I needed to work specifically to make room for this baby, whom I expected to be big.  I could feel his head and shoulders inside and feel that they were wide (yes! as we later learned) and I just knew things would need to be different.

I continued to change positions often, the baby continued to move down and I began to dilate finally.  It had been 3 – 4 hours at this point.  I had expected to hit active labor upon waking and to only need to endure transition for less than an hour before birth; this was completely different!

I started to vary between sitting on the toilet and standing up for contractions.  I never in a million years expected to stand up during labor — in my third child’s birth, I could not even stand up when a contraction hit!  But this time I needed to.

Finally, I realized to get things really moving, standing would do it — but I’d need to make more room.  I ended up standing in the bathroom, gripping the towel bar, with one foot up on the bathtub edge for 5 or 6 contractions.  This brought the baby down further and I dilated from maybe 4 – 5 to nearly 10 quickly.

At that point, I asked for the birthing stool to be prepared.  I was starting to need to push.  The midwives got it ready and everyone pretty much surrounded me as I sat on it.  I didn’t push with every contraction (most though) and pushed for at least 4 without any noticeable progress!  Everyone could see the baby’s head and the bulging sac (my water hadn’t broken yet and I was begging for it too, mentally!), but the baby wasn’t coming out.  This was not typical for me, usually when I start pushing baby is out almost immediately.  They were starting to wonder what was going on if I was really fully dilated…but I didn’t want anyone to check.

Then, another contraction hit and it was time to push again.  This time, baby’s head came quickly.  My water broke and went everywhere (some people were grabbing for more towels and chux pads!), and baby’s head was out.  I had barely a second to think or breathe before I was involuntarily pushing again, and baby’s shoulders popped out, and the rest of his body slid out.

The midwives grabbed him — it was kind of a weird angle because of where I was sitting — and passed him up to me.  My husband informed me that we had another boy!  We had not been expecting that since my pregnancy so closely mirrored my daughter’s pregnancy.  He cried a bit as we got him settled in my arms and got blankets around him.

I wanted to get off the birthing stool almost immediately because it is one of those things that is truly only comfortable in the moment!  I had known I would need it, that I would need to be upright for the actual birth.  My bed was directly behind it, so several chux pads were placed on the bed and they helped me get onto the bed to rest with baby.  The placenta came almost immediately, and we snuggled and nursed after for a good hour.

My daughter cried for a minute when she was told she had another brother and not the sister she so desperately wanted, but once she met him she was so excited — she’s barely put him down since, whenever she’s allowed to hold him.

It took us all day to come up with his name.  We hadn’t seriously discussed any names, and when we had, it had typically been girls’ names, as we had all thought it would be a girl!  But Caleb fits, because he was easily my most active on the inside (by far) and he also has been quite forceful (which is what Caleb means) since he was born too — fussing and squirming to let us know quickly what he doesn’t like.  He caught on to nursing very quickly even though he wasn’t quite latching right at first, and insisted on nursing very frequently in the first day — unlike my other boys, who slept for several hours right after birth.

I remember after Nathan (my fourth) was born, how he fussed just a bit more than the others had and seemed to be more likely to “tell” us how he felt about things in those early days.  He’s proven, at age 2, to be my most opinionated and outspoken kid yet!  Caleb, as a newborn, has been even more insistent about things, so I wonder what we’re in store for with him!  It might be necessary though…fourth and fifth kids could get lost in the shuffle in our family if they were too quiet or laid back. 🙂

This birth was by far the hardest of the bunch.  I even wondered about transferring in the back of my head after a couple hours of little progress, which I haven’t thought about since my first home birth.  It was real work to get Caleb out and just totally different from my other experiences.  I felt grateful that it was one of my later experiences and that I knew to trust my instincts, change position, and continue to work with him to get him out — I might have panicked and had a much, much longer labor if I had been inexperienced with birth.  All in all, it was 5.5 hours of active labor, which is really not that long.

And, despite how big Caleb was, I didn’t have a cervical prolapse like I did with my third.  I did tear, though, but it didn’t need to be repaired.  Recovery’s been much easier in many ways too — Caleb’s nursing all the first night meant I didn’t get much sleep because of the afterpains, but my third trimester tea that I drank often in the final weeks seems to have made them less painful, and they seem to be going away faster.  I haven’t had much soreness, I haven’t had hot flashes or night sweats, and I’ve been more emotionally stable.  We’ll see how this translates to recovery weeks down the road!

Right now we’re concentrating on baby snuggles — someone’s basically always holding Caleb and he prefers it that way.  He also seems to know the difference between our immediate family members and extended family members. He’ll sleep peacefully when immediate family members are holding him, and he’ll grimace, squirm and fuss if someone else does!  (As I mentioned — he’s already quite sure of what he likes and doesn’t like and lets us know!)

We’re settling in as a family of 7. We love new babies!

Have you had a birth that surprised you?