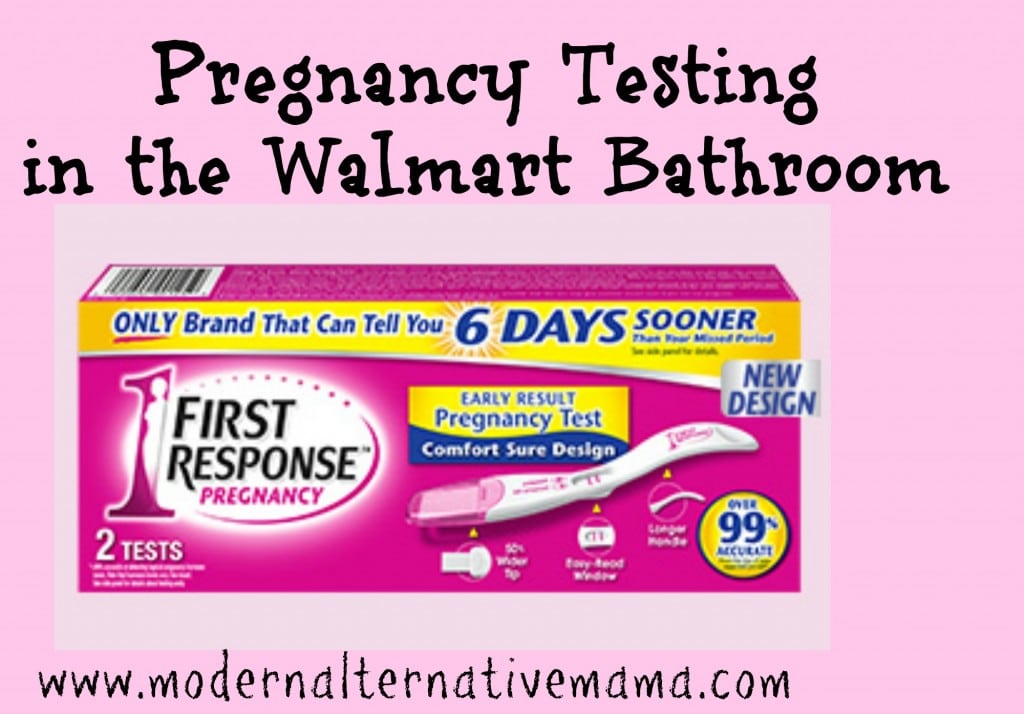 Pregnancy Testing in the Walmart Bathroom

I participated in an Influencer Activation on behalf of Influence Central for First Response. I received product samples as well as a promotional item to thank me for my participation.

As a mom who’s expecting her fifth child any day now, and who has decided to accept the children we receive (we practice NFP, basically, which is very effective but subject to human error), I’ve taken a lot of pregnancy tests.

I’ve tried them all, from the dollar store ones, to the $0.88 Walmart ones (that’s how I found out about this most recent baby — I went super cheap because I didn’t expect it to really be positive — surprise!), to the name-brand tests like First Response, or even digital options.

I have to be honest.  I’ve bought a whole bunch of the cheap tests because, well…they’re cheap.  But I never trusted the results I got very much, especially if they were iffy.

Keep reading to find out how all this led me to test for my current pregnancy IN the Walmart bathroom!!  (and how poorly that went….)

I remember saying to my husband in early November 2008 “Either I’m pregnant, or I will be soon.”  As far as I know, I conceived that night.

I started testing 8 days later, to see how early I could get a positive test, because I was sure I was pregnant.  At the dollar store, I bought a ton of tests so I wouldn’t waste a lot of money on this process.

The first test was clearly negative at 8 days.  At 10 days, it seemed like it might be negative…but it also might not.  I kept the test on the counter all day and kept staring at it.  I was sure I saw a line.  But I also thought my eyes might be playing tricks on me, and didn’t want to get my hopes up.

When my daughter went down for her nap that afternoon, I grabbed my one expensive test and took it before jumping in the shower.  I only lasted a couple of minutes before I opened the shower door to check the test.  This one was definitely positive!!  It was so exciting!

I’m in a lot of pregnancy and birth groups now.  And large family mothering groups.  As you can imagine, there’s a whole lot of pregnancy test talk in these groups!  Basically everyday, at least one person is asking “Do you see a line on this?”

What I’ve learned about tests is this:

I’ll tell you about my experience testing for this current baby.  Remember I said I grabbed a $0.88 Walmart one.  Well, these cheap tests all either little paper strips or little ‘cassette’ style tests.  They want you to catch pee in a cup (which they don’t provide), then use the included dropper to put some in the test window, and wait.

I actually took the test at Walmart because I was too curious and also didn’t want to tell anyone if I was wrong.  So, I didn’t have a cup.  I tried to hold the dropper so I could catch pee…but that didn’t really work.  Then I didn’t have to pee anymore!  I was panicking that I was going to screw up the test because I had only put like one drop in it and it was activated, but probably wouldn’t show an actual result.  So I tried to pee a tiny bit directly on the test itself….  Well, I found out how little pee is required to get a result.  Because it did turn positive quickly after that.

Anyway, that could have all been avoided!!

I honestly usually buy at least one set of “good” tests with every pregnancy to double-check the results, and this is usually the test I keep as a “souvenir” — ha.  I just trust their results more, and they’re easier and nicer to use.

Recently First Response sent me their newest test.  It’s red-dye (which is a must), it’s a mid-stream test with a wide tip (no more cups or mess), and it has a new handle design so that you can hold it and not pee on your hand.  Because who hasn’t done that at least once!  I even know some people who were startled and dropped the whole test in the toilet….  This test has a longer handle to avoid all that.  (Isn’t testing for pregnancy nerve-wracking enough?  Whether you want it to be positive or negative it’s kind of a big deal.)  Plus, it says it can tell you up to six days early.  Which is more than any other test on the market, and will eliminate a lot of that “Do I really see a line?!”

Obviously I didn’t take it.  I thought about it, but at 39 weeks pregnant any test would give me an accurate result.  Heck, any random person on the street can tell I’m pregnant — no test needed!  I stuck the tests away for next time…or whenever I get paranoid that it might be next time.  I was kind of excited…but it’s time focus on the current baby!

I’d love to hear your funny pregnancy-test-taking stories!  I’ve shared two of mine.  Those stories never get old, huh?

What’s your silliest or most awkward pregnancy test moment?