How to Tantrum-Proof Your Toddler |
AD 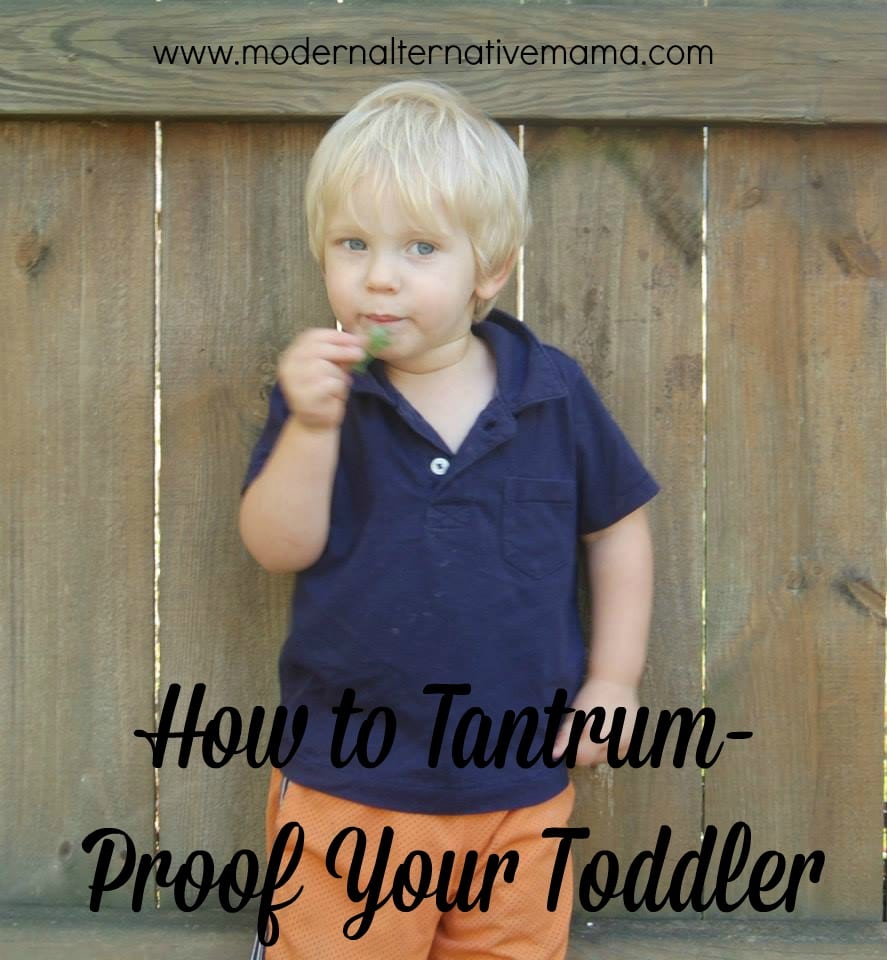 How to Tantrum-Proof Your Toddler

I got really lucky with my third child.

He was, and is, super easy going.  We never had to leave a playdate because he was acting out.  He sat quietly in carts at the store and never tried to climb out.  I can count on one hand the number of true meltdowns he ever had (I think it was about three).

Once, when he was maybe 18 months old, we were shopping at Trader Joe’s.  They give out snack crackers at their sample table to children.  That day, they only had enough for two, so my older kids got some and he didn’t.  He sat very quietly in the cart, noticing what had happened, but not crying at all.  He looked sad, though, and said “Crackers?” a couple of times.  I felt so bad for this child, this child who didn’t get any yet was not complaining, that I bought him a whole box for himself.  (Not that he didn’t share.  But yeah.)

If he’d been my first and only child, I would have just thought I was an amazing parent.  But as a mother to four, I know darn well that isn’t true.

The other kids are great.  I love their creative minds.  But they were, and are, not easy going.  (Thankfully my older two are well past the age that this causes trouble.)

He’s 2.  And he didn’t really talk much until 18 months.  I’m actually not sure he talked at all until 18 months.  It was after we left the home with the mold issue, and within a couple of weeks he burst forth with speech and hasn’t stopped since.  He’s now 26 months and talking up a storm.  I can’t believe the things he says sometimes!  (Quite the vocabulary.)

He’s headstrong, stubborn, and opinionated.  I love him to pieces and often want to write down every single thing he ever says or does…or follow him around with a video camera.  Because he is awesome.  But oh with the stubborn and opinionated.

All this to say — I’m not writing this to give you advice for the easy children, or because I “got lucky.”  I’ve had easier ones, and I’ve had harder ones.

And I know that it is possible — mostly — to “tantrum-proof” your toddler.  Not that you can avoid them all (especially with well-meaning older siblings who want to “help” and don’t quite get it), but you can significantly cut down on the number of tantrums.  Really.

How to Tantrum-Proof Your Toddler

I found my older two quite difficult from around 18 months to 3 years or so.  And it wasn’t them, it was me.  I didn’t get how to deal with them.  I had expectations that were not in line with their developmental capabilities, and I was holding them to a standard they couldn’t achieve.  I was their adversary.

I learned, by my third child, what not to do…and what to do instead.  We’ve had much smoother sailing with three and four because of it.  (Yes, because of it.  Remember how different they are?)

This is a summary of what I’ve learned.

Toddlers don’t like to be told what to do or interfered with.  They have just discovered that they are separate from you and have some control over their own bodies and environment.  Therefore, they want to exercise this control whenever possible.

If you see your toddler struggling to do something — get their cup off the table, put a shoe on, etc. — don’t swoop in to help.  Instead, ask.  “Do you need help with that?”  They will often say yes, and step back to let you do it.  But if you interfere and help without asking, watch for the explosion!  I’ve observed this many times as older siblings jumped to help without asking and faced toddler screams.  I stepped in, got on their level, and asked — and they suddenly stopped screaming and were more than happy to allow me to.

What if your toddler clearly can’t do something but insists “Me do?”  Let them.

Most likely, if you’ve offered help but haven’t forced the issue, they will eventually realize they can’t do it and will come to ask you for help.  (We taught them either the word or sign for “help” quite young so they had a way to ask.)  Sometimes it takes them a few minutes.  Don’t we, as adults, sometimes want to try things for ourselves first?  Give them the space to do it.

And sometimes…they’ll surprise you.  My 2-year-old, with some (unfortunate!) coaching from an older sibling, learned to unlatch our rather difficult kitchen gate.  The gate whose sole purpose was to keep him out.  Oh well….

Whenever possible, give them choices.  These choices need to be easily understood and they need to be reasonable.  For example, not wearing a diaper to bed is not a choice for a child who is not potty trained.  “Which of these diapers would you prefer?” is a choice.  (Pick different colors, different types, or just hold up two.  Or ask “Do you want to get the diaper, or should I?”  My 2 YO was upset about this recently so we gave him a choice between cloth or disposable.  He picked one, problem solved.)

If they’re upset about a situation, give them two reasonable choices and ask which they want.  If they don’t want to choose, tell them they can choose or you will choose.  Usually, they will choose.

Sometimes kids don’t like things because they don’t understand.  Lots of times my littles began to protest because a sibling was (trying to help!) and interfering with their process.  For example, taking their empty cup to refill without explanation.  All the little one knew was, someone was taking their cup, and they were mad.  Once I stepped in and said, “Can I refill your cup?” or “I’m going to get you more water,” they stopped crying.

Be Polite to Them

Believe it or not, this really matters.  I’ve coached my older kids on this a bunch of times.  Sometimes they get frustrated and demand, “Give that back to me!” or “You have to put your clothes on now!” and of course, the toddler refuses to comply.

But when they turn it around and say “Would you please give that back?” or “Can I help you put your shirt on?” (sometimes with the explanation of “So we can go to the park”) they comply very readily.

I have seen many times where my young toddlers will refuse until asked calmly and politely.  I usually laugh at it.  Even with the little ones, “please” and “thank you” and requests get a whole lot further than commands.  They’ve observed your behavior, how you ask for things and how you react when people aren’t very nice to you, and it matters to them, too.

Tell Them How it Is

Sometimes, toddlers do something because they just don’t realize it isn’t okay.

Recently, my 2-year-old would not stop screaming.  Screaming, as in, a high pitched shriek anytime anyone interfered with him in any way.  Or anytime he thought they might interfere with him.  He was screaming upwards of 30 times a day and it was really beginning to wear on me.

So, every time he screamed, I immediately went over to him, got down to his level and firmly said “No screaming.  Use your words.”  I was very clear about both what not to do, and what to do instead.  Believe it or not, he stopped screaming within just a couple of days (mostly).  But screaming once or twice a day, some days, was nothing compared to what it had been.  He needed to know both my expectations and what to do instead.  (He’s a really smart kid who communicates well, and this might not work for a kid who’s not at that level yet.)

Know What They Can Handle

My almost 4-year-old only had his meltdowns when he was overly hungry or tired.  And my 2-year-old acts out a whole lot more when he’s hungry or tired.  (He’s gone through pinching, biting, smacking, kicking, screaming….  When he’s tired.  Not fun for anyone.)

Recognize that this behavior is saying “I need something.  I don’t feel right.”  Strive to meet that need, and avoid a situation where you’re asking more than they can handle.  Taking an overtired child to the grocery store and expecting them to sit quietly in the cart is just setting them up for a meltdown.

I learned quickly that when my 2-year-old started to hit or push other kids — or me — that it was time to leave.  Immediately.  This was not uncommon at the end of a play date, as we were nearing nap time (but was not typical up until that point).  And yes, I packed us up and got us out of there as fast as possible.  Sometimes with the 2-year-old strapped into a stroller or shopping cart so he could not hurt other children while I rounded everything up.

I work hard not to expect more than he can handle.  I try to give him time and space to take a nap when he needs it, and give him meals and snacks when he needs.  These days he’ll simply say “Come kitchen.  Something to eat” if he wants food.  That was not the case a few months ago.

Even the happiest toddler isn’t so great when they need something.

Bottom line?  Meet your toddler’s needs and treat them with respect.  Don’t push things on them; ask them first.  Talk to them politely.  It all matters, and believe me, it cuts down on tantrums a lot.

And you know, when you treat your toddler like a human being, they learn to do that, too.  My 2-year-old will quickly say “Sorry mom” if he accidentally hurts me (and not because I told him to).  He’ll try to be more gentle.  He’ll stop doing something if it’s hurting or upsetting others.  He has an interest in being nice to others, the same as they are to him.  They learn the behavior they see modeled.  It really does work…my younger kids were much more empathetic, respectful, and helpful from a much younger age, because of how we treated them.  But that’s really another post. 🙂

How do you avoid tantrums with your toddler?