Why The Final Weeks of Pregnancy are Critical |
AD 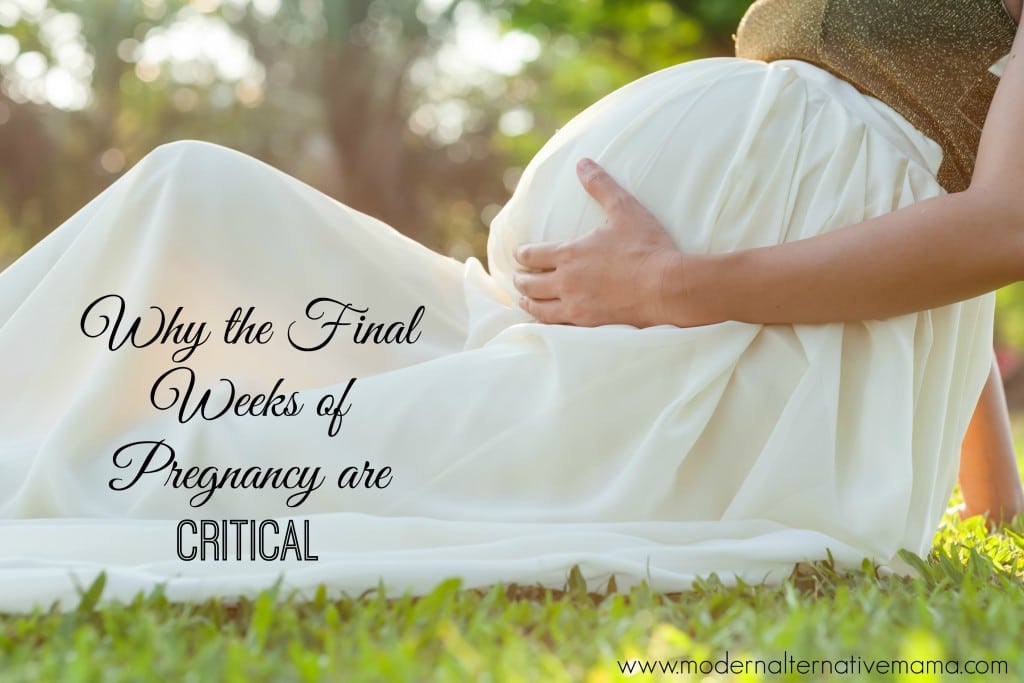 Why The Final Weeks of Pregnancy are Critical

I’ve just hit 38 weeks pregnant, which means that baby could *technically* come any day now.  I don’t think it’ll happen for a couple more weeks, and I hope it doesn’t.

A lot of mamas are told that 37 weeks is full-term, and that even a week or two earlier isn’t really that bad.  According to a mainstream pregnancy update email I got at 35 weeks, “baby will spend the next few weeks putting on weight.”  While that’s definitely true, it’s certainly not the only — or more important! — thing that baby will be doing in those final weeks.

Yet, because so many mamas are told that putting on weight is really the only important thing that baby is doing, and that 37 weeks is full term and just fine, they are impatient for their babies to arrive.  I have heard of mothers trying “home induction” type remedies as early as 34 weeks, because they were tired of being pregnant!

Mamas.  Those final weeks are actually critical for your babies, and they should not be rushed.  Believe me — at 38 weeks along with my fifth baby, I know just how uncomfortable those final weeks are.  Really.  But they are truly so important.

The Most Important Reason for Baby to Wait

The single most important thing your baby is doing between 35 and 40 weeks is not putting on weight (which is important, too, as it protects him/her from body temperature fluctuations) is brain development.

In fact, a baby’s brain at 35 weeks weighs only 2/3 what it will at 39 – 40 weeks.  Baby’s brain actually increases by 50% in those final weeks of pregnancy!  According to one study, baby’s brain is increasing by an average of 2.3 mL per day in the third trimester.

One of the most critical parts of this brain development is from DHA, an omega-3 fatty acid.  This needs to be consumed directly by the mother in order to get to the baby, according to another study.  Fish and cod liver oil are the best sources, as they contain DHA (while plant-based sources contain ALA, which the body isn’t efficient at turning into DHA).

Another study shows that “…protein, iron, zinc, selenium, iodine, folate, vitamin A, choline, and long-chain polyunsaturated fatty acids” were especially needed for brain development during the third trimester of pregnancy, and deficiencies in these key nutrients at this time could lead to long-term brain dysfunction.

Yet another study shows that “For term infants, longer gestation within the range of 37–41 weeks was associated with significant bilateral increases in gray matter density in the superior (BA 22) and middle temporal gyrus (BA 21). Significant associations were additionally observed in the left parietal lobe (BA 7).”  (This means that key areas of the brain were more developed, at ages 6 – 10 years, if birth occurred after 39 weeks’ gestation rather than before.)

There are significant benefits to waiting until baby is ready to be born for brain development, and these differences last for years!

For more information about nutrition and how it impacts brain development, be sure to check out the Nutrient Chart for Pregnancy and Breastfeeding.

While brain development is the most important, that’s not all baby is going through in the final weeks of pregnancy.

Lung development is also important, and it matters that babies are able to come when they are ready — and are not induced early (even by a few days or weeks).  One study notes, “Hospital-based deliveries increase the difficulties for transition [from internal to external life] for many fetuses because of the frequent use of Cesarean sections, deliveries prior to the onset of labor, rapid clamping of the cord, and the anesthetics and analgesics associated with these hospital deliveries.”

Effectively, what happens in the final hours before birth is that cortisol levels rise sharply (and thyroid hormone levels are rising too), which helps the newborn adapt to life outside the womb and to breathe properly.  This surge is absent in c-sections or inductions that occur without the natural onset of labor — which is why breathing difficulties are more likely to occur.

The same study also notes, “… over the final weeks of gestation, the conversion of T4 to T3 increases, catecholamine release by the adrenal and other chromaffin tissues increases, glucose metabolic pathways in the liver mature, gut digestive capacity increases (enzyme induction), β-adrenergic receptor density increases in many tissues including the heart and the lungs, and the surfactant system in the lungs is induced to mature.”

(That basically means that the endocrine system matures, the gut matures in preparation for normal feeding, the liver matures, and more.  These final weeks are important to many processes in the baby’s body!)

These final weeks are absolutely critical.  Induction or c-section (elective) should be avoided — these interventions should be used only when there is a clear medical need (like pre-eclampsia).

Transitions at the Moment of Birth

I didn’t intend to discuss birth when I started writing — at least not now — but too many of the studies I found discussed the transition from fetus to newborn and the importance of the final weeks of pregnancy in influencing a healthy transition.  They also included notes on what should happen to smooth the transition at the moment of actual birth.

Last year, the Journal of Obstetrics and Gynecology (one of the main journals informing pregnancy and birth practice) noted that it’s Time to Implement Delayed Cord Clamping.  There have been shown to be no benefits to early clamping and in fact great benefits to delaying.  (Including reducing anemia, increasing neurological development, and even more in pre-term infants.)

Some studies note a slight increase in the risk of jaundice in infants that experienced delayed cord clamping, but other studies showed no such increase.  Blood volume was up to 30% greater in the delay group, and birth weight was higher.

Basically, what all this means is that birth should be spontaneous (natural onset of labor), mother should be allowed to labor naturally as long as she desires, once birth occurs cord clamping should be delayed until at least pulsing stops, and immediate skin-to-skin contact should be encouraged.

Do you feel that the final weeks of pregnancy are critical?  Why or why not?