Leaving Kids in Cars Vs. Car Seat Use |
AD 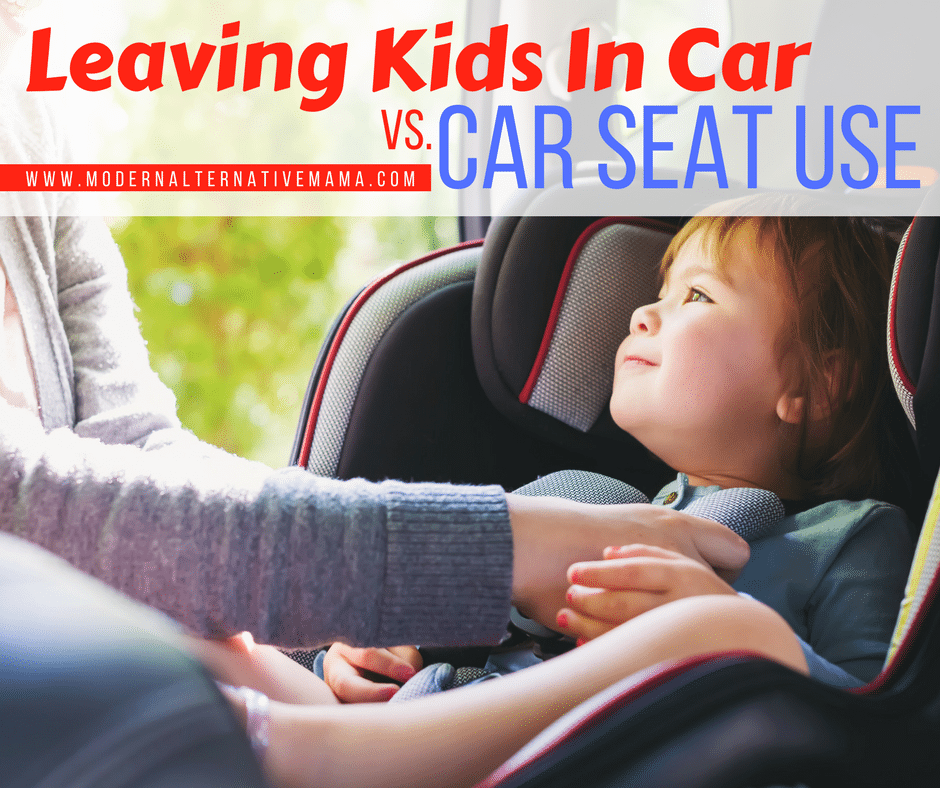 Leaving Kids in Cars Vs. Car Seat Use

A week or so ago, I had a very interesting conversation with people on my Facebook page.  I shared a post written by a mother who was accused of neglect after leaving her 4-year-old in the car unattended for less than 10 minutes (she was subsequently arrested, subject to multiple CPS investigations, and spent months dealing with the fall out).  She wasn’t alone, either – she shared the stories of other mothers who left their babies or children, purposefully, for a very short time and were also subject to arrest and ongoing investigations.

The point wasn’t that you should leave your kids in cars.  I’ll admit that I felt uncomfortable reading those stories, because I would never feel okay leaving kids in cars so young, not even for a few minutes — not unless they were on my property and I could see them easily (and the weather was mild).  But I also feel it was completely ridiculous that because of one small lapse in judgment, they were treated so harshly and branded as child neglecters and abusers.

I’ve seen too many families destroyed or fraught with stress due to false accusations, or ridiculous ones.  A mother local to me was recently turned in by public school staff because her children came to school with their hair unbrushed.  These children wore clothing and shoes in good repair, had been fed, did their school work regularly — they just didn’t have their hair brushed.  And now mom has to deal with CPS investigations…over hair.

I don’t think that people honestly understand the damage that they do to families when they call over such minor things.  (Granted, unbrushed hair is really never serious, whereas a child unattended in a car could be, if the weather is very hot or cold or the parent doesn’t return quickly.)  Before ever calling the authorities, people need to ask themselves — is this a serious situation?  Is this child in immediate or ongoing danger?

If I saw a child in a car who looked hot, was screaming, or appeared to need medical attention, yes, I would call 911 immediately.  Yes, I would break the window and get that child out myself.  I wouldn’t necessarily call CPS, because parents do make mistakes and I wouldn’t want a horrible situation made worse — the parent probably would feel guilty enough for forgetting.

Anyway, I feel strongly about not judging other parents.  I feel strongly that we need to offer a helping hand and some grace rather than judgment.  We have all made mistakes, we have all had lapses in judgment.  Sometimes, unfortunately, these mistakes or lapses have led to tragic outcomes.  Sometimes, a child learns to unlatch the door while we’re sleeping and wanders outside…and drowns.

(Thankfully, for most of us, our lapses do not lead to situations like that!)  One of my children cut his finger pretty badly, once, because he climbed inside the pots and pans cabinet while I was putting the laundry away and found my mini-food chopper.  He was fine…in the end…but yes, it was horrible for all of us, for a short time.  (He screamed so long and so loud while I held the cut to stop the bleeding that I thought someone would call the police, and he almost made himself sick.)

Anyway, this isn’t really the point I wanted to make with this post, although I think that grace and a helping hand go a long way.  The point I want to make is that our perception of “risk” is actually pretty screwed up.  Let me explain….

Kids Alone is Dangerous; Car Seat Use is Optional

A great many people were very angry with me for my post, calling me negligent and irresponsible (some of them missed the point and thought I was saying to go ahead and leave your kids in the car whenever, which I wasn’t).  A lot argued about all the things that “could happen” if kids were left in the car, and suggested this should never be allowed until driving age…at least 15 years old.

The suggestions got more and more ridiculous as the day wore on.  (By the way — yes, children dying in hot cars is a serious risk and you should take precautions not to forget your children in the car in the summer especially.  If you are dropping off or picking up a young child from daycare and it is not in your normal routine, stick a reminder to your mirror especially if you are tired.  Be smart about this.  About 30 kids die every year from being accidentally forgotten.)

What are the chances of a child, especially an older one (the commenter suggested an 8-year-old) being dragged from a car in broad daylight, in a crowded parking lot, and kidnapped at gunpoint without anyone noticing?  I suppose it could happen, but…how often does it occur?  To one child per year?  Less?

Some would say, “But any chance is too much.  We must protect our children.”

Okay.  But here’s the thing.  Many of the same people who would make this argument call me crazy when I start talking about car seat safety.

Current safety guidelines call for children to be rear-facing in their seats until at least 2 years old and 30 lbs., or preferably until the limits of the seat.  They should be harnessed forward-facing as long as possible thereafter (entering a booster seat-style car seat no sooner than 4 years and 40 lbs. but preferably not until 5 – 6 years, when they can reliably sit up even if they fall asleep).  Booster use should continue until 8 years old and 80 lbs. and at least 4’9″ in height.

This is what the AAP recommends, and parts of this are also state law in many states. (While most states do not have laws about leaving kids in cars — only 13 states do.) Studies and crash tests show that children who are rear-facing longer are 500% safer than those who are turned too soon.  (Size doesn’t matter — maturity of the spine does.)  If you haven’t, watch a crash test video of a 30-lb. child rear-facing vs. forward-facing.  I watched it one time…the FF child is thrown forward violently and very likely to be injured, while the RF child barely looks like they were bumped.  When I watched it, I cried…and I keep my kids rear-facing at least 3 years.

Not using a car seat properly is a real risk, people.  A risk that is completely, 100% preventable and a risk you take every single time you put your child in a car.  If your child’s chest clip is not fastened or is pushed down by their belly, if their straps are not tight, if their seat is not installed tightly, if they are not in an age- and weight-appropriate car seat…your child is much, much more likely to be injured if you get into an accident.

No.  You won’t get into a car accident very often, and maybe not at all.  But if you do, it’s too late to go back and change anything.  It’s completely within your control to choose to learn about proper car seat safety and to use your car seat properly every time you drive your child.

A whole lot of people argue with me about car seat safety.  I’m being ridiculous.  All those studies can’t be right.  We all survived bouncing around the back seat without a car seat at all, so clearly it’s fine.  (We all survived being left to sit in cars while our parents shopped, too — why is one a valid argument and one isn’t?)

Or, my favorite — “But if my child were in a car seat that long, they would get made fun of!”  Really?  You make safety decisions for your child based on the opinion of their peers?

The point is, the same people who are horrified by the idea of a child being left alone in a car for five minutes (they might get kidnapped!) argue that car seat safety rules are overblown and unnecessary.  They ignore, dismiss, and even belittle a real risk that they can control in favor of freaking out about a “risk” that is basically non-existent.

I don’t know about you, but while I don’t leave my kids in cars (yet), I worry a whole lot less about that than I do about making sure they’re properly strapped in every time we drive.  Even across a parking lot or around the block.  Because I know I couldn’t live with myself if my family were one of the thousands each year who got into an accident.

I ask everyone to seriously think about this.  Why are we ignoring a serious risk in favor of the ethereal “what ifs?”  How does this make any sense?

I’m very concerned about safety.  But I make sure to address the issues that pose an actual, immediate risk — not a worst-case scenario that’s incredibly unlikely.  I put up a gate between my kitchen and living room and toddler-proofed the living room because my toddler was at risk in the kitchen alone.

Every time we are in the car, I make sure my kids are in their car seats properly.  I don’t let young kids use knives and I supervise and teach older kids to use them properly.  I don’t let anyone ever run or play with knives or scissors.  Once, I took a knife away from an older child who was showing off how “safe” they could be by waving it around without dropping it or hurting anything and explained it was stupid to take that risk, which was much more likely to lead to an “accident.”

But do I worry that every neighbor could be a sex predator who’s just waiting for my kid to come out and play?  Nope.  (Statistically, they’re much more likely to be victims of sexual abuse by a trusted friend, neighbor, coach, etc.)

Do I worry that my kids will be kidnapped if they stray too far from me at the park?  Nope. Baby snatchers and random sex predators are not even on my list of things to worry about because they are so unlikely.

We live in a world, as one friend said, where we watch all of these TV shows were kids are kidnapped in dramatic and public ways by strangers.  We believe this is representative of reality (it’s not).  The true risks to our children are much less dramatic and not shown on TV, so we mistakenly believe that the drama version is real, and we ignore the actual risks.

Take car seat safety more seriously.  Take other legitimate risks more seriously.  Stop worrying that every person who walks down the street or peeks out their window is a potential kidnapper or sex predator and is coming for your child the moment you turn your back.  You’ll more likely drive yourself crazy with worry than will anything ever happen.

How do you feel about leaving kids in cars vs. car seats?