You Don’t Have to Join the “Real World” |
AD 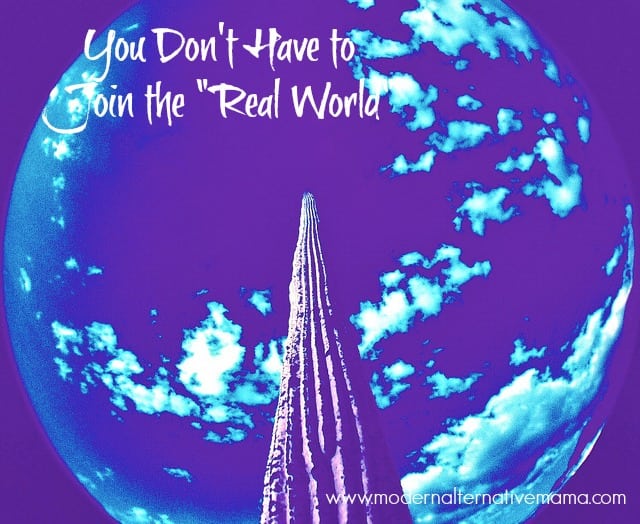 You Don’t Have to Join the “Real World”

I can’t tell you the number of times that I have heard people laugh at alternative choices — like homeschooling, home birth, alternative medicine, and so on — because “That’s not the way the world works.  You’re sheltering your kids from it now, but when they grow up they’ll have to actually be part of the real world.”

What does that even mean?  Is there one world?  One culture?  One “way” of doing things that is the “real” way and everything else is just fake?  Am I not living in the “real world?”  I guess I must not be, because I keep right on making alternative, uncommon choices and I do so more and more often as I get older.

Here’s the thing.  What they really mean is, “The way the mainstream does things is the ‘real world.’  Join us or be mocked and ostracized.”  We’ve certainly all faced that.

But, you don’t have to give in.  You don’t have to do it their way!  And your kids don’t, either.  There will not be a day when they grow up and realize that everything they know is crazy and wrong and that the mainstream way is the “right,” “real,” or “only” way.  Honestly, it doesn’t work that way.  And I’m not concerned that my kids will think I somehow “tricked” them by raising them alternative, even though others sometimes seems to think so.  This is why.

Your World is “Real”

There are so many different cultures throughout the world — and even throughout our country.  There’s not one homogenous “right” way to be.  Sure, some things are more common in general than others, like sending your kids to public school or eating processed foods.  But there are areas where these things are really uncommon (think about pockets of California where a large percentage go to Waldorf or other private schools — or in my area, there’s a very large and active “natural parenting” community!).

One area or way isn’t more real than another.

The truth is, the world that is real to you, is the world you live in.  The world where you feel comfortable.  What you’re used to, what you like, what you do — that’s your “real world.”

In my house, we spend time talking about how everyone does things differently.  How there are a lot of ways to “be” and different choices to make.  How it’s okay to be different.  Different from us, and different from others.  There really is no “normal,” except what is normal to us is our personal normal.

It’s actually kind of self-centered to think that any one way is or should be “normal” across the board, or that your way, or the way many people do certain things, is the “real world.”  It shows a lack of education of the many different cultures that exist, and a lack of acceptance of differences in others.  It’s narrow-minded to think because many or most people do a certain thing that everyone “has” to do it that way.

When you raise your children in a specific way, that’s what is real to them, too.

Our children know that we cook from scratch and prioritize real food.  They know other people don’t — we haven’t hid that from them (not that we could.  We go to regular grocery stores sometimes too and they see what’s available).  We talk about how everyone has a different situation, different knowledge, and makes different choices.  Some of the people who eat processed food have gotten some mixed up messages about what’s healthy.  Some do not have time to cook.  Some do not prioritize healthy food in their lives.  They know there are all kinds of reasons why people choose what they choose.

Still, our normal is real food.  The kids don’t care that this isn’t what others mostly do.

A child isn’t going to be raised in a world of freedom, where they’re (for example) homeschooled on a homestead, with parents who work at home with them and cook from scratch, and grow up to suddenly “realize” that they have to eat processed food, send their kids to public school, and work a 9 – 5 office job.  That’s just silly.

It’s not to say they won’t choose those things — every person is different — but they won’t grow up to think it’s the only way.  That’s one of the great benefits of choosing “alternative.”  Your family knows there are many ways of doing things.

I have several friends who are adults who were raised in “alternative” ways, too.  Who were born at home.  Who weren’t vaccinated.  Who were homeschooled.  These choices aren’t new.  They were less common in the 70s and the 80s, but they certainly existed!  And you know what?  Many of them have followed in their parents’ footsteps.  They didn’t become adults, suddenly realize that they were duped, and that they now needed to live in the “real world.”  What was real to them, then, is real now!

Interestingly, among my alternative adult friends, most tried out a more “typical” lifestyle.  Then after a few years, they came to realize and understand why their parents made the choices they did, and they came back to the alternative side!  Now they’re just as passionate about it as their parents were.

Be Free to Live In Your Real World

Ultimately, don’t worry about the naysayers.  Your world is real.

Find your “tribe” of people who think and live like you do.  Create your own community.  Appreciate and enjoy the simplicity of being around like-minded people.  (Not that you shouldn’t have friends from all walks of life, too, but it’s nice sometimes not to feel that you need to explain or justify yourself.)

If you want to join other like-minded individuals online, you can join the MAM community on Facebook.

We’d love to connect with you more!  And even if you’re not into social media, we encourage you to find your local tribe.  You deserve a safe space of people to spend your time with.

Have you ever heard this statement about the real world?  How do you feel about it?