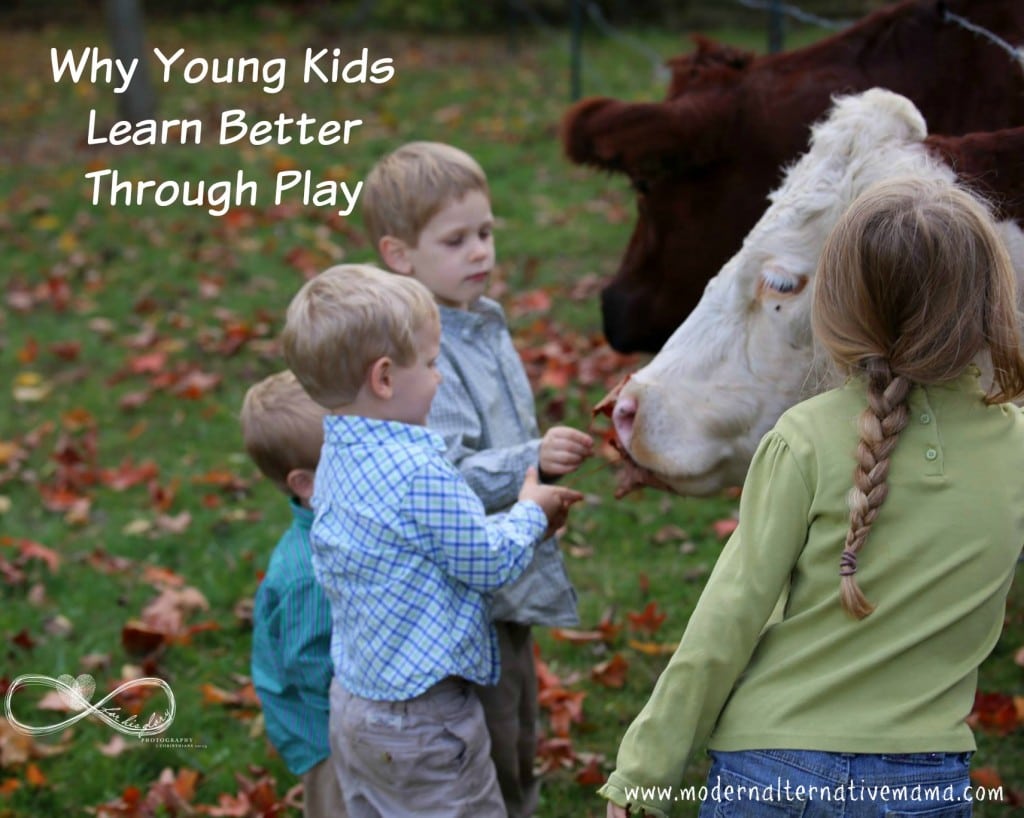 These days, a lot of parents feel anxious about giving their kids an “edge” when it comes to learning.  It leads people to talk, sing, play classical music, and read stories to babies even before they’re born!  And after birth, there are all kinds of different videos, flashcards, and programs intended to teach your baby to sing, dance, learning colors, shapes, numbers, and even how to read.

But this focus on early academics and pushing children ahead is misguided.

In the early years, babies and young children are learning so much just from interacting with the world around them.  We’re actually stunting their intellectual growth by focusing so heavily on academics!

The best way to let your child learn, as it turns out, is through play.

This isn’t a novel idea.  Many famous educators have been promoting this idea for years.  It’s just that a lot of parents haven’t gotten the message — or have fallen into the trap of worrying so much about “getting ahead” that they feel like play isn’t doing enough.

An interesting study from 2008 showed that while early reading predicted better early academic success and better reading scores in the 4th and 6th grades, it was also associated with less lifetime education and poorer mid-life adjustment.  Early school entry was even associated with earlier mortality!  Academic achievement in the early years isn’t the only thing that matters — we’re looking at life-long success.

Another interesting study shows that children who are part of play-based learning in the early years actually achieve higher education, have a higher earning potential, have higher employment rates, and are even incarcerated less often!

Clearly, play in the early years is critical to lifelong success — academically, financially, and emotionally.  But why?

Play allows children a chance to explore their worlds and exercise their autonomy over that world.  It gives them a chance to solve problems on their own, whether a problem with an object or project or a problem with other children.  It gives them a chance to see how things work, and explore new and different ways of doing things.  It teaches them naturally about the laws of nature.  Children learn so much better by doing than by having someone tell them or show them!

When children play, they learn about how space works.  Block play can lead to better geometry skills later (and has, in one study, cited above).  Make-believe play leads to more complex language use as they come up with interesting scenarios and interact with their peers.  In fact, these skills translate to increased achievement in language and math down the road in several studies, including this one.

How Do Kids Learn in the Early Years?

The best way for children to learn in the early years is to have access to a number of high-quality materials and the freedom to explore them.  These materials could include blocks, art supplies, books, dolls, kitchen equipment, outdoor toys, and more.  Good experiences could include trips to parks, playgrounds, friends’ houses, gyms, museums, and more.

It’s key to provide your child with a wide array of possibilities, and then get out of their way — or let them direct you in play!

Many parents understand the value of play-based learning and are exploring the idea of doing this at home — homeschooling or unschooling for the early years.  But, they aren’t sure where to start.  How do you create a rich environment?  How do you encourage quality play?  And is all of this really…enough?  (In a world where early academics are pushed, it often seems like it isn’t!)

Trust yourself, mama.  Keep plenty of books, blocks, art supplies, and more around for your little ones.  Play outside often.  Enjoy exploring your child’s interests together.  It really is enough.

How do you feel about unschooling/play-based learning?