When Your Child Runs in the Street |
AD 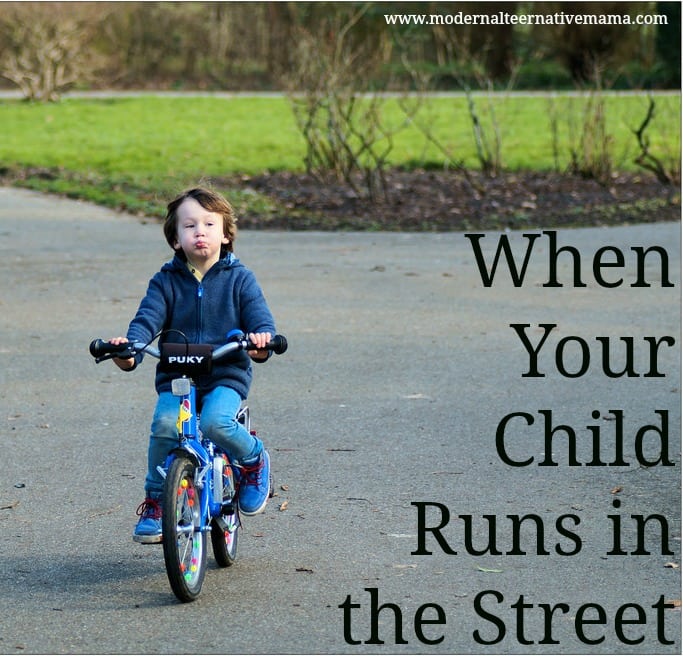 When Your Child Runs in the Street

As many here know, I’m a pretty strong advocate of gentle discipline — that is, no spanking.

When I discuss this with other parents, this is what I hear most often: “I try not to spank.  I use it as a last resort.  But sometimes, I think kids just need to be spanked, if what they’re doing is that dangerous.  Like if they run into the street — that could kill them.  I’d rather spank them than have them die.”

When I first decided not to spank, I struggled with this a lot too.  There were tough circumstances — like this one — where I just couldn’t fathom not spanking.  It was too serious, and I could not think of another way.  I mean, if push really came to shove…I had to do something to keep my kid safe and impress upon him/her how serious running away in a parking lot really was.

And believe me…this was very personal to me.  My now 5-year-old is a very sweet boy who generally listens.  But, when he was 2 or 3, he was easily overwhelmed by large crowds and lots of noise and he was a runner.  He would bolt away from me at random, just take off.  This did occur a few times in parking lots and we were about to have heart attacks!  I’m so thankful that he has outgrown that, and that none of my others have been like that!

I understand your fear.  But I want to help change the way you think about this…

When Your Child Runs in the Street

Here’s the thing.  And this applies really not only to this situation but to many really tough situations we face with young children.  When we believe that spankings are necessary if they do the bad thing, then we are failing to think ahead.  We are failing to prevent the bad thing in the first place.

Little kids don’t think about these things.  They don’t think about how dangerous they might be.  Don’t think that they will “get to you” by disobeying and doing these bad things.  They are not trying to go against your wishes.  They are curious about something else that they are chasing, or they get bored and start wandering, or they are overwhelmed by too much activity and run.  It’s not a behavior issue, in the sense that they aren’t trying to defy your wishes.

We need to take a step back again.  The natural consequence of running in the street is *not* “getting hit by a car.”  No loving, sane parent would ever allow this to happen to their child, not in the name of “discipline” or for any other reason.  Which is why that’s not actually the natural consequence — it’s simply too dangerous.

The real natural consequence is preventing the dangerous situation in the first place.

My older children are allowed to get out of the car in a parking lot and then stay close to the car while they wait for me to get the younger ones.  The young ones, who may not be safe, are not permitted to get down alone.  That is the natural consequence.  Sometimes they would like to get out of my arms to walk or be with their older siblings.  But this is not allowed.

If a child cannot be safe in a street — either because they have bolted once, or because you suspect they could — here are the natural consequences to take:

Basically, do not allow your child any freedom when they are in a potentially dangerous situation.  They earn freedom by learning to be safe in that situation.  My 3- and 5-year-olds can stand outside of a car and wait for me while I get my 22-month-old out (who is not allowed to get down, because he can’t be safe).  My 7-year-old is allowed to cross non-busy streets with supervision (but without me walking her across).  Freedom is a privilege that comes with responsibility…and lack of freedom is the consequence that comes from immaturity.  I guarantee children who are not special needs will not still be bolting into the street by age 6 or 7.

We just need to look at our idea of “natural consequences” differently!

When it comes to small ones, we need to remember that they don’t act foolishly because they want to disobey us.  They are not trying to be “bad.”  They do wrong because they don’t know any better yet, their brains and impulse control are still immature.

We can’t force them to grow up or learn any faster by spanking them, or otherwise punishing them.  That doesn’t teach them new information.  Instead, we have to limit their freedom and prevent them from doing something that is dangerous or bad in the first place.  The consequence is their limited freedom.

For example, my oldest, at 7, is allowed to go into our fridge most any time she wants and find a snack — within reason.  My 1-year-old is not allowed in the fridge at all, because he would remove items he shouldn’t have and make a mess.  Sometimes he would really like to go in the fridge and find something.  But he isn’t allowed to.  Sometimes this means we have to put a lock on the fridge, or remove him from the kitchen, much to his dismay!

What happens if the boundaries are violated?

Sometimes, when my older kids are in the kitchen, my 1-year-old does go into the fridge, because he saw them doing it and it isn’t locked.  Should he be punished then, for disobedience?  No.  He wasn’t trying to break the rules; he doesn’t even understand what the rules are!  He only knew he was hungry and wanted to get a snack.  He’ll get offered a healthy snack (if it’s not just about meal time) and then removed from the kitchen.  We meet his need — hunger — but not his want (raiding the fridge).

And yes.  They will learn even without punishment.  By age 3 or so, “Don’t go in the fridge” is enough to stop them.  My older children listen when I say “Stop at the street.”  They do not bolt into it.  They have learned, naturally, that cars can come and could hurt them, and that they need to stop and wait for those cars in order to be safe.  I did not need to spank them to teach them that lesson — time and natural maturity (plus discussions about street safety) did that.

Basically, we need to prevent our children from getting into unsafe situations, and if they do anyway, then we remove them immediately.  They will protest not being allowed, or being removed; it’s okay if they cry.  Our need to keep them safe trumps their desire to do whatever it is.  We don’t need to add to that with punishment.

How do you feel about this?  Do you spank for “serious” offenses?