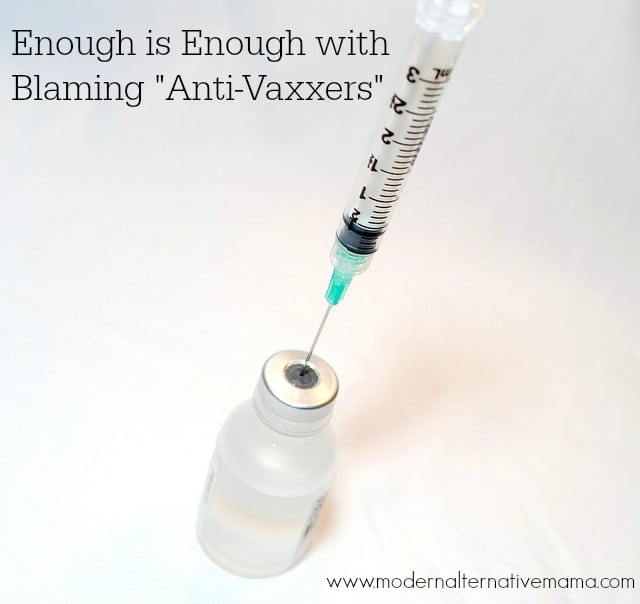 Enough is Enough with Blaming “Anti-Vaxxers” In the last few days, there have been *dozens* of articles coming out in major media outlets that are absolutely filled with hate and anger towards families that don’t vaccinate.  It’s an unbelievable overreaction to the “Disneyland Measles” outbreak (which is actually, so far, much smaller than other recent outbreaks — so why is it such a big deal?).  This fight has reached an absolute fever pitch.

We’re also dealing with Dr. Sherri Tenpenny being denied at venues in Australia, with some people wanting to deny her a visa to even enter the country.

There is bullying, nastiness, insanity from every corner.  We’re at the peak now.  And it’s affecting people in their everyday lives.  More and more are having to read tirades in their Facebook newsfeeds about how stupid “anti-vaxxers” are, or endure personal berating over their family’s choices.  Some are encouraging people to find out which children in their child’s classroom aren’t vaccinated so they can ostracize them.  Some are refusing to allow unvaccinated children into church nurseries, playgroups, and more.  Perfectly healthy children, who happen to not have been vaccinated.

I’ve even been told that some of my readers have been messaged by trolls and harassed, simply for participating in some of the threads on my Facebook page!  That’s just going too far.

So, I’ve had enough.

Families who believe in vaccine choice, it’s time to stand up.  I know it’s hard, with all the hate.  But if we sit silently and let them rage and fight, they’ll strip our rights.  Yes, it’s easier to be quiet and hope people don’t know who we are, so that we don’t have to deal with the brunt of the anger directly.  If we are silent, they win.  And they cannot win.  They are wrong.  They are wrong to bully people into their way of thinking.  They are wrong to try to force their will on others.  And they won’t do it, if I have anything to say about it.

Luckily, since I have this platform…I do have something to say about it.

The Facts About the Measles

There’s a sore lack of facts right now in the media about the “Disneyland Measles” as well as measles in general.  So let’s just share some.

In the Disneyland situation:

We can’t make the leap, from what we do know, that this was “caused by unvaccinated people.”  We simply can’t.  That is just an easy scapegoat.  If fits their agenda — to stir up hate and anger towards people who make alternative vaccination decisions, in order to try to strip exemptions and peoples’ rights.  (No, nobody has the right to force medical care of any sort on anyone else.  Period.)

But, of course, there’s a lot more to it than that.

The measles is just not a serious illness for most people.  We also know far, far more about it now than we did 60 years ago, and medical science has advanced quite a lot as well.  We know how to prevent the most serious complications now in most cases.  If we stopped vaccinating, more kids would get measles, and the vast majority with no issues.  We would not see rampant blindness (since vitamin A supplementation is easy to get and inexpensive).

We would not see rampant death or encephalitis (these are very rare anyway).  If the death rate was really 1 in 5000 (and it’s hard to say, with the advanced medical care, if it would be that high), and everyone got measles — we could assume about 4 million cases per year — that would be 800 deaths annually.  Just to compare, there are around 35,000 deaths from car accidents annually, while preventable medical errors kill around 400,000 people annually.  We might see a reduction in autoimmunity and other lifelong health complications as well…but that hasn’t been thoroughly studied.

Are complications possible?  Yes, of course.  But I, personally, look at the whole picture and not at worst-case scenarios.  We don’t have adequate safety testing on the MMR.  It doesn’t provide lifelong immunity, and it requires at least two doses (and they’re considering adding a third) — each dose comes with its own set of risks, doubling (or tripling) your overall risk.

I’m not going to tell you what you should decide here.  If you feel the MMR is the safer course of action, then by all means.  I’m trying to cut through the nonsense and share a more accurate, scientific picture of what’s going on right now, instead of wild suppositions about all those “anti-vaxxers.”  (By the way, I love science.  Accurate science.  Appropriately applied science.  I’m not such a fan of “my science is better than yours,” which a few trolls seriously said to me.)

What You Can Do

If you’re as tired of the bullying as I am, it’s time to stand up for our rights and take the world back.  We shouldn’t have to listen to hate speech because we’ve made a different medical decision.

First, sign this petition.  It protects our rights to make our own medical decisions.  It’s around 2300 signatures right now; let’s get it to 10,000!  You can sign if you fully vaccinate, partially, or don’t — as long as you believe parents should have the right to make that decision for themselves.

Second, share the facts.  Feel free to copy and paste any of the facts from above (citations are hyperlinked) and share them on any threads where people are blaming “anti-vaxxers” or getting nasty or scared over the measles.  Help to correct the misinformation.  Feel free to share this post, too.

Third, speak up.  If people are being rude, call them out.  Be respectful, but say something.  “We all make different medical decisions for our children.  The evidence is not clear cut.  Being rude isn’t going to change anyone’s mind, and I’m asking you to stop talking to others like this.”  I suggest deleting and banning anyone who can’t remain civil.  If you’re ready, share some information on your personal Facebook profile, or talk to friends in person.  Remain calm and let everyone know how hurtful and harmful this sort of negative attitude is.

Fourth, report hate pages.  There are a number of different ones on Facebook.  “Anti-Vax Wall of Shame.”  “Things Anti-Vaxxers Say.”  “Banned by Modern Alternative Mama.”  There are many others.  Report them for hate speech.  Their entire purpose is to take screenshots from groups where they troll and mock the people — some of you may recognize your own comments being mocked on those pages!

Fifth, write to your Congress representatives and let them know how important preserving/adding to vaccine exemptions is to you, and preserving medical freedom.  Search “state representatives” or “state senators” to find your state’s website, and your local representatives.  In some states there are specific efforts underway; check www.nvic.org for updates on these.

Stand up for your rights, or others will take them from you.  We can’t allow that.

EDIT: Plenty of people are upset that I noted that we could see up to 800 measles deaths annually if no one vaccinated.  First, that will never happen — because unlike some people, I believe everyone should have a *choice* in their medical care, and many will choose to vaccinate.  That is fine.  (Although vaccination isn’t 100%, as we all know.)  Second, those people completely ignored that there are currently 400,000 deaths annually from preventable medical mistakes.  I don’t understand how this is acceptable, but even *one* death from the measles is not.  Are you serious?  Where is your commonsense?  How can you be angrier about theoretical deaths than hundreds of thousands of actual deaths?  I can’t wrap my brain around that one.

Finally, if you post nastiness and hate — as many have attempted to do — don’t expect it to get published.  It won’t.  Call me Hitler, Stalin, Kim Jong Il, a baby killer, whatever you want.  I control what gets posted here.  Keep it civil or you’ll never see it live.

Are you as tired of the bullying over medical decisions as I am?